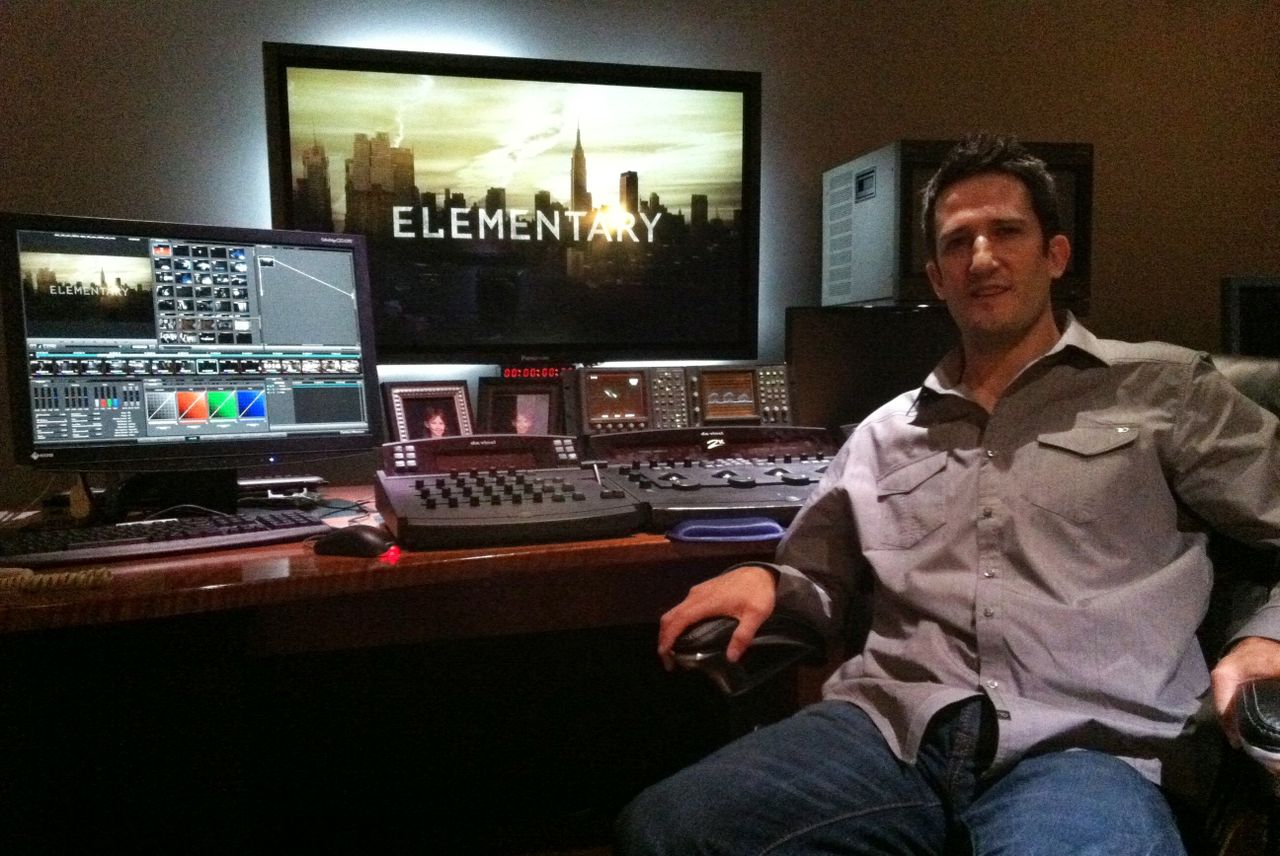 While it may take Sherlock Holmes and Dr. Watson just 60 minutes to crack a case on an episode of the hit CBS television show “Elementary,” Tony D’Amore can do it in less. As the Senior Colorist at LA based post house Encore and lead colorist for the wildly popular series, Tony is responsible for color correction and grading the weekly show, and he relies on DaVinci Resolve color correction software.

Each week, Jonny Lee Miller, as detective Sherlock Holmes, and Lucy Liu, as his faithful sidekick Watson, tackle some of the New York Police Department’s toughest cases. In order to deliver on the look of the show, Tony applies a rich and moody feel to a fairly normal looking New York City environment. Using Resolve’s node based processing, Tony takes advantage of unlimited Power Windows with circle, linear, polygon and PowerCurve shapes, which he uses to address any issues and deliver on the producers’ and cinematographer’s vision.

“Resolve’s unlimited nodes, windows and shapes help me deliver on the look of the show,” said Tony. “Without it, I might have to make compromises due to a lack of tools. With a show like ‘Elementary,’ there’s no room for compromise. With Resolve, I can take down the exposure on the walls or floors, address every issue and ensure everything looks perfect.”

Tony also benefits from Resolve’s Power Windows’ full multi point tracking, which increases efficiency by helping keep his workflow organized by locking windows to on screen objects. “I’m able to pop a window on and hit auto track, which allows me to move on to the next shot. I’m not wasting time opening new windows, rebuilding tracking points or dealing with cumbersome keyframes. Clients and DPs are always amazed at how fast it is. Resolve lets me stay ahead of the curve,” said Tony.

Originally shot in Log-C, the dailies colorist, Steven Bodner, applies a single Linear LUT to all the footage. By loading the same LUT on a node in Resolve and the dailies CDLs, created by Steven, on another node, Tony is able to start with the exact same color as the dailies that were delivered to the network, DP and producers, allowing him to stay a step ahead from the get go.

Resolve allows Tony to turn the LUT node on and off on demand, which is used if he has a stock shot, title card or main title sequence that is already linear. The same goes for the dailies’ CDLs, which Tony can use as a starting point or transition to Log-C if he decides to go in a different direction and needs the latitude of the original footage.

“The ability to work from either color corrected dailies or camera original LOG material at the click of a node gives me extreme versatility and saves time and effort,” said Tony. “In the past, I would have to drag in an offline cassette and queue up and switch the tape, having to look at it before cutting back. With Resolve, in one click I can mute the node and see it without the dailies’ CDL if need be. It’s simple, but extremely effective. Being able to see everything Ron saw during production provides a dialogue when conforming.”

Tony benefits from the ability to work offline in Resolve using a separate timeline. If he is clicking through his gallery for stills, he can seamlessly click offline and see the frame in that respect. “Working offline in Resolve provides me with a sense of security because it shows me that all electronics aside, this is where I currently stand. It’s a very useful tool,” explained Tony.

For Tony, efficiency doesn’t just start when he sits down to color. Tony previews footage and begins assessing color days before the process has even been scheduled. According to Tony, during one shoot, a camera filter was switched out causing a grey hue in some of the footage. By examining the footage in what Tony calls “preassembly” he can note it before the grading process beings.

“It’s all about efficiency, which starts before I sit down to grade. Working with a file based workflow, I can access the files and begin coloring before the editor even completes her session,” he said. “The majority of the time, I’m coloring shots 30 minutes before the editor is completely finished, and I’m one third of the way done once she does finish. While our file based workflow gives me a head start, Resolve is responsible for extreme efficiency throughout the coloring process.”

Tony D’Amore is a senior colorist at Encore, which is committed to providing the highest quality of service and industry leading technology while maintaining the integrity and creative tradition of the post production process.