Lens flares are the new lens flares. Lens flares have made a comeback of late, largely due to recent developments in software that allows lens flares to behave in a more realistic manner with border adjustments and occlusions. Long are the days when all we had was a stock 35mm default flare. Now there are many good plug-in options. Red Giant’s Knoll Light Factory is a classic but is feeling a bit aged, even with its new 3D Flare add on, currently in beta. Genarts Sapphire v6 has a new reworked lens flare option, which is much improved over previous versions, and Optical Flares from Video Copilot is quite spectacular. More on Optical Flares in a minute… First you need to know how lens flares work inside Smoke.{C}

Let there be light!

Smoke has quite a powerful lens flare feature included and it is integrated in Smoke’s true 3D compositor, Action. 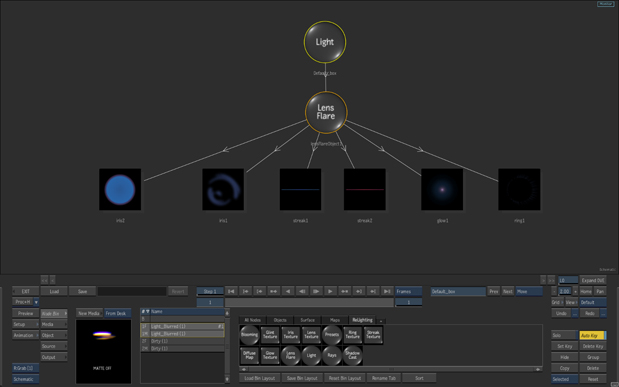 Lens flares are built using a wide variety of nodes. You can link single lens flare elements or multiple instances of an Iris, Streak, Glow, Rings, or Glint textures. These textures attach to the Lens Flare node, which connects to a light added to the scene.

The lens flare object has global settings to control the intensity, scale, and color, as well as the pivot point.

Each of the individual texture elements contains multiple options to allow you to create an infinite number of styles for your custom flare.
The Iris texture allows you to choose from 10 different caustics or 10 orbs with 6 textures, 10 discs with 10 noise settings or polygons with up to 20 sides.

Iris, Streaks, Glints, Glows, and Ring textures have 1 or 2 Basics menus as well as individual settings controlling every aspect of your flare for complete user control. 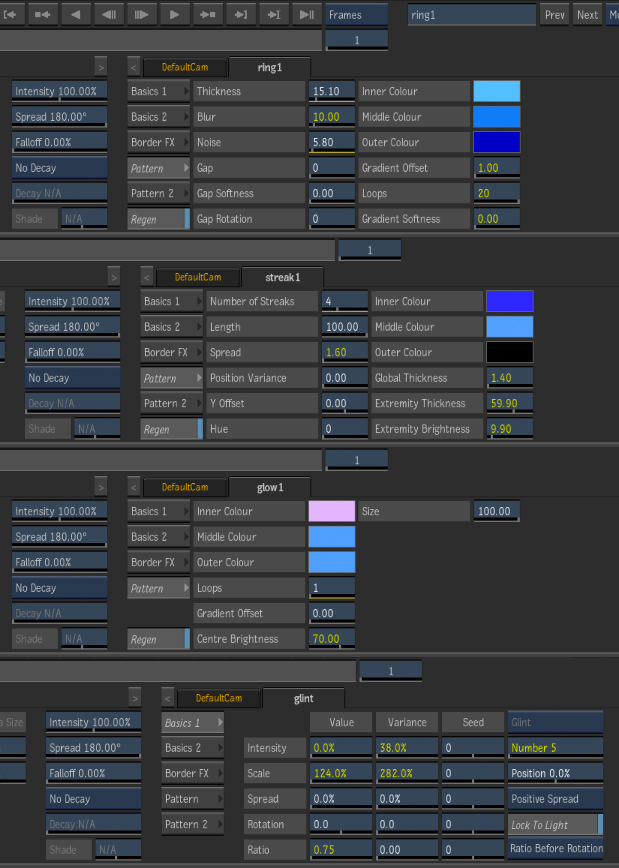 And if you want to create more elaborate flares it’s as easy as copying an existing texture in the Action schematic and making modifications or attach a fresh texture by double tapping the icon or dragging from the tool bin. 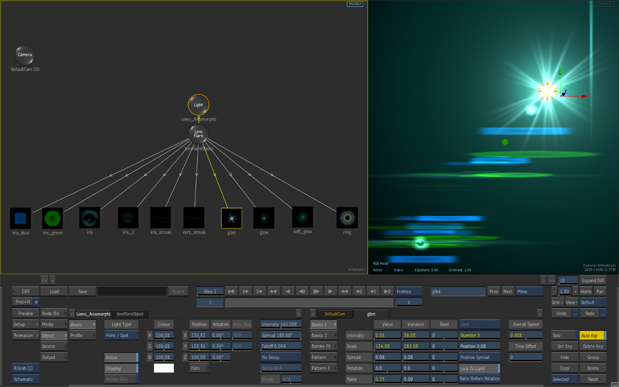 The lens flares in Smoke realistically respond to the edges of the frame. The border range is adjustable as well, as well as the tolerance to the edge. Since the Action module in Smoke is a true 3D compositor, the lights can be positioned anywhere in XYZ space. The lens flares will naturally occlude when the light travels behind any objects in the scene. These objects can be 2D image planes, 3D Text generated in Action, or imported 3D models.