We are in the process of going through our book Creating Motion Graphics with After Effects 5th Edition (“CMG5”) and pulling out a few “hidden gems” from each chapter, including essential tips for new users as well as timesavers that experienced users may not be aware existed.

Chapter 5 of CMG5 covers tricks you can do with keyframes including tips for copying and pasting them; auto-orient rotation; and Keyframe Assistants (such as Motion Sketch, Smoother, Time-Reverse Keyframes, and Exponential Scale) to help you manipulate keyframes. Below is just a sampler:

Things to Do With Keyframes

To expand or contract a group of selected keyframes, in the layer bar view, hold down Option on Mac (Alt on Windows) first, then drag the first or last keyframe, as shown at right. 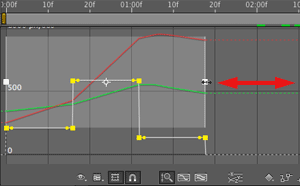 In the Graph Editor, drag the edge of the selection rectangle that appears around them (right). All selected keyframes will move accordion-style.

To move multiple keyframes (or a motion path) in the Comp panel, first select the keyframes you want to edit, then do one of the following:

On another project, though, you might have hundreds of keyframes on a motion path that crosses over itself, which makes it difficult to distinguish and select individual keyframes easily. In this case, you might want to limit the number of keyframes, or the time period, to display keyframes only in an area immediately around the current time indicator.

The Smoother keyframe assistant is designed to smooth out changes in a property’s values; it does this by replacing selected keyframes with a new set of keyframes, taking into account the Tolerance value. When it’s applied to a layer that was motion sketched (using Animation > Keyframe Assistant > Motion Sketch), it can leave behind a much more editable motion path; it can also be used to lend more of a “steadicam” after creating keyframes using a motion stabilizer. Smoother can be used on other keyframes as well, such as those generated by motion stabilization and tracking, or the Keyframe Assistant > Convert Audio to Keyframes.

Open Window > Smoother and select the keyframes you wish to smooth. Set Smoother to Spatial or Temporal keyframes. Position keyframes in the Comp panel (such as those created by Motion Sketch) are Spatial because their values are on the X and Y axes. Properties that change only over time, such as Opacity, would default to Temporal.

Enter a Tolerance value, click Apply, and RAM Preview the results. If the animation requires further smoothing, Undo and try again with a different setting. Indeed, Undo is your friend here: Even though Smoother is now built into Motion Sketch, we set its value to 0 during sketching in order to capture the maximum amount of data, then smooth after the fact by experimenting to see what value gives us the most desirable result. 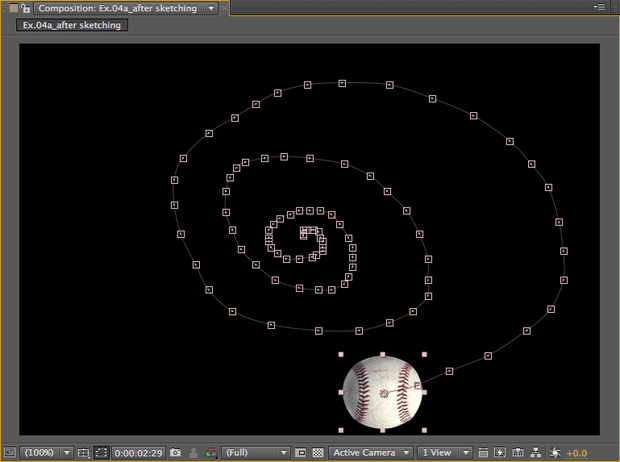 Above is keyframes from a motion-sketched spiral before smoothing; below is the motion path after smoothing. 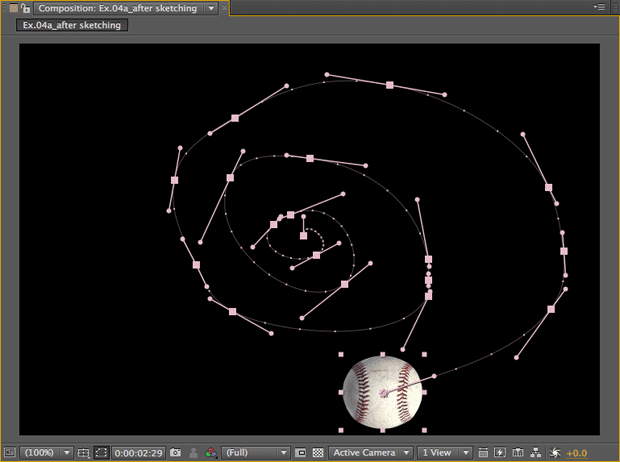 Layer > Transform > Auto-Orient allows you to have your layer rotate to always aim along its motion path. A problem with Auto-Orient is that there’s usually a slight hitch at the beginning and end of the motion path (the layer appears to do a little extra twist). Let’s see how to fix that:

Zoom into the Comp panel and select the first keyframe’s icon for your motion path. In this example, the spatial keyframes are all of the default Auto Bezier type, whose handles are represented by tiny dots that are not connected to the keyframe by handles; if you’ve already edited the path, you will see a handle connecting the keyframe and dot.

The problem is, the handle for the first keyframe may not align with the motion path (as is the case at right), so the layer orients itself at a slightly different angle for the first few frames. This results in a twisting motion for a few frames before the layer straightens itself out. The problem is even more obvious if you have motion blur enabled, as you will see additional blur during this sudden one-frame orientation.

To fix this, drag the handle dot. If it was an Auto Bezier keyframe, a direction line will appear (indicating this is now a Continuous Bezier keyframe). Align the direction line with the motion path. If you can’t see the handle dot, then press and hold down the G key (to temporarily switch to the Pen tool), then click-and-drag on the keyframe icon itself to pull out a new handle. Release the G key to toggle back to the Selection tool.

The motion should be smooth as it exits your first keyframe. Repeat this for your last keyframe as well.