When fans turn their attention to the large screens at sports’ biggest events, there’s a good chance that they’re watching the work of Van Wagner Big Screen Network Productions (VWBSN). Over the past three decades, Big Screen Network Productions established itself as the world’s leader in video board production for major sporting events, including the Olympic Games and World Cup to the Super Bowl, Rose Bowl, and NCAA Championships. A recent addition to the Van Wagner Sports & Entertainment family, VWBSN continues to deliver award-winning in-stadium content for audiences at major sporting events around the world.

The production company is now implementing Adobe Creative Cloud to meet the growing demands for sports video content production. Creative Director Cameron Cone, Associate Creative Director Ryan Kehn, and Senior Editor Alex McMeekin work with teams across the U.S. and around the world to deliver anything that sports events need: from a single animation to full turnkey production.

Adobe: How do you differ from standard creative agencies?
Kehn: If there’s a major sporting event in the world we’re usually involved in some capacity. For our biggest jobs, we will come in at the ground level, consulting on everything from script development and talent to technology integration, truck procurement, and control room setup. When we worked on the Kentucky Derby, for instance, we were on site for two weeks creating and editing content.

Adobe: What kind of changes have you seen in your industry?
Cone: Sports presentations are getting bigger, meaner, and faster every day. In the past, we would produce one hour of content for a show, but now our clients are asking for 12 hours or more. Many of our clients are also looking to be on the cutting edge, so they’re implementing technology like 4K resolution displays that will really capture the audience’s attention.

At the end of the day, when you’ve got a stadium full of fans, you need to have great shows that keep them excited. Clients are highly invested; they want to know what our workflow is like and how we plan to deliver the best content possible. That’s why it’s important for us and our clients that we eliminate bottlenecks in the pipeline so that we can focus on content and a high level of creativity. 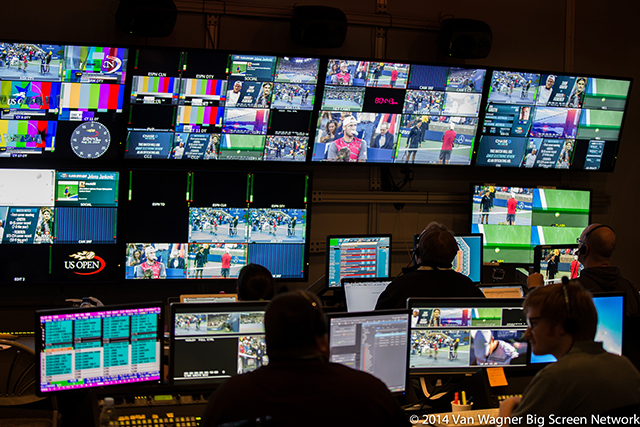 Adobe: Why did your company decide to switch to Adobe Creative Cloud for teams?
McMeekin: We had been working with Final Cut Pro for years, but it really wasn’t keeping up with the pace of technology like we needed. We’ve used Adobe After Effects in our workflow for a while, so it made sense to look at Adobe Premiere Pro. The idea of being able to stay within a single platform for all of our creative content production was really exciting.
Kehn: We did a lot of research into video production solutions, and we really liked what we saw from Adobe. Adobe Creative Cloud for teams balances the flexibility that we need to operate efficiently, even on the road, with the functionality that we need to meet our clients’ high demand and expectations for quality. Adobe is really committed to continued development, as well as listening to the needs of users, which gives us confidence that Adobe’s products are only going to get better and grow with our business.

Adobe: What are some features that are making a difference in your workflows?
Kehn:Dynamic Link is huge for us. During football season, which is our peak time, we might be working on graphics and shows for dozens of clients at once. We need to work as efficiently as possible. With Dynamic Link, we can work on files in Premiere Pro and After Effects simultaneously and see updates in real time. This saves us a lot of time that we would have spent manually exporting and importing clips.
McMeekin: Creative Cloud for teams makes collaborating so much simpler. We can flexibly manage our licenses with freelancers to make sure that we’re all on the same page. We know that everyone’s going to be on the latest versions of software, which means that we don’t have to worry about delays caused by incompatibilities. It’s also encouraging to see editors reacting so positively to Premiere Pro. The interface is very similar to After Effects, which everyone is already familiar with, so the learning curve has been really smooth. Editors are diving right into Premiere Pro and taking advantage of everything it has to offer. 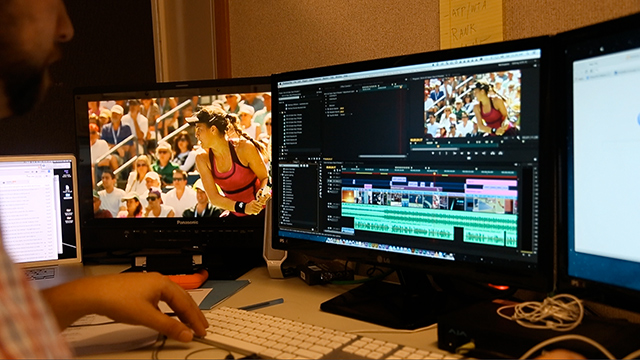 Adobe: What kinds of challenges arise from taking your work on the road?
Kehn: We’re usually traveling from site to site, so Creative Cloud for teams is a huge benefit because we can save presets and files, and then access them from anywhere.

Creative Cloud for teams also helps us stay flexible. Other creative companies can get away with delivering projects on one standard codec, but we have to deliver video to whatever equipment and codecs are available in the stadium’s control room. We tend to work with a lot of different camera formats as well. We need to be flexible enough to handle anything we’re given, both in terms of ingest and output requirements.

The biggest thing that Adobe did right was make it possible to work with any video format on the Premiere Pro timeline without transcoding first. We even play highlights straight from the timeline. Because we no longer have to worry about extra processes we can do more in the same amount of time, which helps us produce a cleaner and more refined final product for our clients. 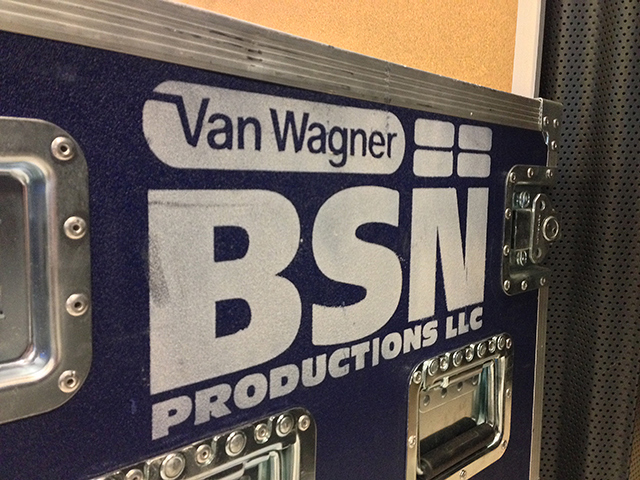 Adobe: What are some of your favorite features in Adobe Creative Cloud?
Kehn: I do a lot of our in-house 3D graphics, so Cinema 4D is a big part of my workflow. The integration between Cinema 4D and After Effects is fantastic and we all geek out a little bit when new integration is announced. 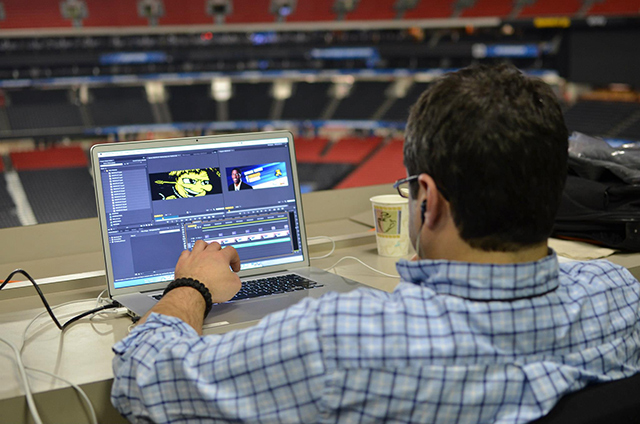 Adobe: Have you seen any big advantages to Premiere Pro on the job?
Kehn: We’ve been on site at some high profile events that require us to be flexible and be able to make changes to content, sometimes up to the last second (literally) and having no option but to play it live off of the Premiere Pro timeline, even looping graphics. We also work with a wide variety of codecs for delivery to several different play-out systems.  Being able to make changes in After Effects and throw them into a Premiere Pro sequence, without the need to re-transcode or render out effects in the timeline, has been a huge for us and allowed us to turn around great content with tight turnarounds.

Adobe: What production are you currently working on?
Kehn: We just finished three weeks on site at the U.S. Open and are prepping for our busy Fall/Winter schedule which includes the Big Ten and Pac-12 Football Championships, various Bowl Games and the College Football Playoffs, as well as the NHL Winter Classic, and the Biggest Football Game on Earth! 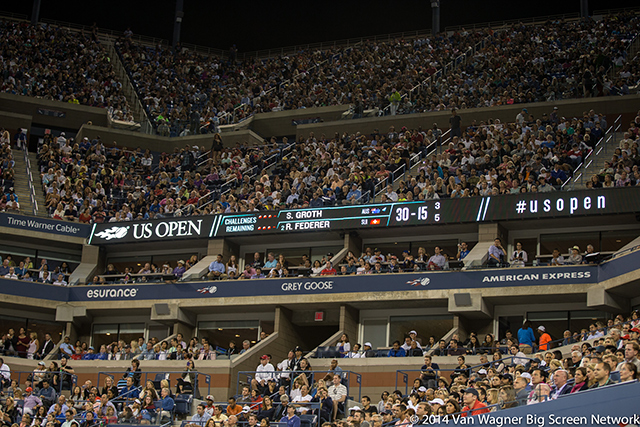 Adobe: What’s next for VWBSN and Adobe Creative Cloud?
McMeekin: We’re starting to dive into the rest of the applications. In addition to After Effects and Premiere Pro, we’re also working with Adobe SpeedGrade, Audition, Photoshop, and Illustrator. Previously, we had separate workflows for every step, but now we’re working with one seamlessly integrated platform. It makes our jobs so much easier to have everything look, feel, and work the same.
Kehn: We want to be a part of helping Creative Cloud grow even further by getting involved in the Adobe community and helping to develop great workflows for people in similar situations. We can see that Adobe is really listening to its customers to make the software even better, and we see ourselves working with Adobe for years to come.