One question that I get asked a lot is, “How do I create my own DCP’s for delivery to a Festival, or to theatres in general?”, and to be honest, it’s not an easy question to answer.  There is a lot of setup involved, no matter which NLE you’re using, so I thought the easiest way to go about doing this is to dedicate an article to the setup in each of the three main NLE’s, Media Composer, Premiere Pro and then FCPX, and then an article to the actual creation of the DCP itself.  In this article, we’re going to cover important things you need to keep in mind in general about DCP’s, their creation (no matter which NLE you use), and the delivery.  You’ll quickly see that the majority of your work will be done in your timeline, and you need to make sure you get everything right there, so you don’t run into problems down the line.

We’ve done a few articles here at PVC about creating DCP’s.  Rich Young did a write up back in 2013 about CuteDCP for Premiere Pro that you can check out here, and Don Starnes did a write up just the DCP creation process back in 2015, and you can check that out here.  We’re definitely at about that time where we need a refresher, as there are a lot of new options out there for everyone to use.

IMPORTANT THINGS TO GET OUT OF THE WAY NOW

Now, I’ve been making DCP’s for a long time now.  Probably a good 2-3 years, so I’ve created a ton of them.  What’s important to keep in mind is that in all the DCP’s that I’ve created, not one of them has been 4K.  Not one.  They are all 2K, either Flat or Scope, so for the purposes of this article, we’re only going to look at 2K workflows, but the 4K counterparts will work pretty much the same.  I’ve listed below all the acceptable resolutions for DCP creation for digital cinema for your reference.

So, that does bring up the big question, which one are we going to be using?  We’re going to be looking at both 2K Flat 1998×1080 (just a little wider than HD, at 1.85:1 aspect, as opposed to HD that is 1.78:1), and 2K Scope at 2048×858, at an aspect of 2.39:1.  You might be thinking “Who cares, I’ll worry about that when we’re done and ready to create the DCP!”.  WRONG.  You’ll worry about that before you even start shooting, because if you want a Scope aspect on your DCP, you might want to take that into consideration when everything is shot (camera type, format, matting on camera while shooting, etc).  The last thing that you want to have happen is that you’ve cut your masterpiece, only to realize that, in the end, you really wanted to have a Scope master, and all your footage is Flat, and you’re going to need to reposition all the footage, to get it to fit into the Scope aspect ratio.  Trust me, it’s a ton of work that can be saved by taking this into consideration in the end.  Not a big deal if you’re doing a two minute trailer, but a huge deal when you’re trying to submit a ninety minute master.  Remember, there’s nothing wrong with having a Flat master of your final production, just keep in mind that nine times out of ten it will be pillarboxed for the final product.  Don’t sweat this, as it’s a completely acceptable delivery format (Flat DCP pillarboxed for Scope), and one that I do all the time.  I should also mention that in all the time I’ve been making DCP’s, I’ve never created a 2K Full aspect (2048×1080).  Now, if all of these aspects seem a little confusing, I’ve put some images below to give you a better idea of what the resolutions actually look like, 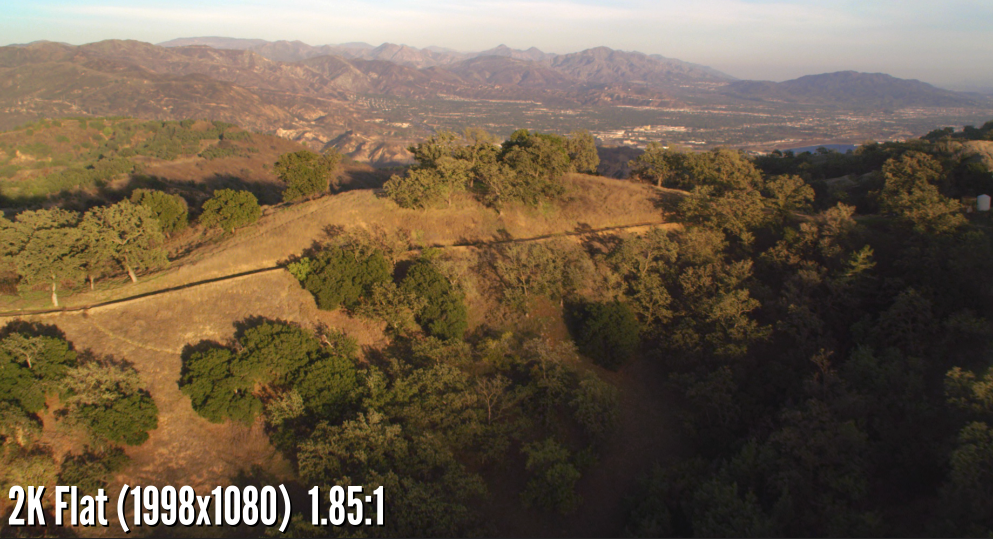 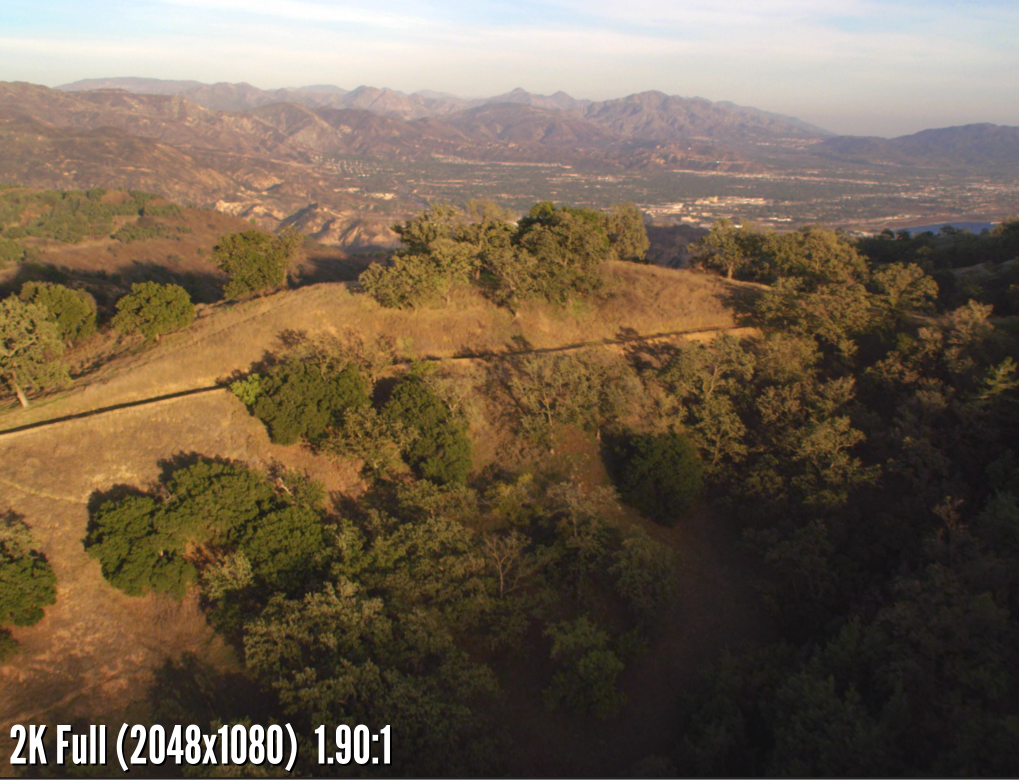 This is another big one that you need to consider.  Almost 100% of the DCP’s you’ll come across, are created in 24fps.  That doesn’t mean you have to create yours that way, as there are other acceptable frame rates including 24, 25, 30, 48, 50 and 60fps, but what happens if you have a master that is 23.98?  Chances are you will need to convert before you make your DCP. Now, there is some good news in this.  There are a ton of productions out there shooting 23.98, and most DCP creation applications will interpret 23.98 as 24, and let you create your DCP masters using your 23.98 masters (same works for 29.97 being accepted for 30fps), but this is something that’s exceptionally important to know before you get started, as the last thing you want is to get to the point where you’re ready to create your DCP, and the whole thing comes to a screeching halt, because the DCP creation program won’t accept your frame rate.

Again, another very important concept to keep in mind when creating your DCP in your NLE.  You will need to do a color space conversion from REC709 (assuming you’re working in REC709) to DCE XYZ color space.  Now, I know that might sound confusing, but don’t worry, it’s actually a pretty simple process, as it will be a LUT that we’ll add to our footage, but that does then beg the question, where can you find the correct LUT, as there are a few XYZ color space LUT converters out there, and they all don’t look exactly the same.  There are other things to keep in mind as well, when it comes to the REC709 to XYZ color space conversion, and that is you will notice some luminance variations, and things might not look exactly the same in XYZ as it did in REC709, but don’t worry, we’ll take about that in the individual NLE’s themselves.

I know you think that we might be putting the cart before the horse a little, but knowing where to find this LUT is important, as we’re going to need to apply it to our footage in just a little bit.  Believe it or not, if you have DaVinci Resolve installed on your system, you already the LUT, and for my money, it’s the most accurate REC709 to XYZ LUT you’ll find.  What exactly do I mean by that?  Well, there are other LUT’s that do the conversion, but are either too bright or too dark.  The DaVinci Resolve LUT is even, and just has the best overall look, when footage is being played back out of a Dolby Doremi DCP player.  You can find the LUT at the below locations for both Mac and Windows.  Take them from these folders, and copy them to a location that you have easy access to (as these locations can be a bit cumbersome to go to constantly.  If you don’t have Resolve installed, you should head over to the BlackMagic Design website, and download it now, as we’re going to need it in our upcoming lessons.

Here’s the big monkey wrench in all of this.  Most DCP creation software wants you to already have your footage in a “DCP Friendly” format, when you import it into the software, to create your DCP’s.  So, what codec are we looking to use for our DCP’s?  ProRes?  Nope.  Animation?   Negative!  We’re going to be working with JPEG 2000.  That’s right, now that does beg the question, where can we download this codec from, that we can work with it.  Believe it or not, the best codec that I’ve found is one that hasn’t been updated since 2012, and it’s fnord’s J2K plug-in.  It’s completely free, and the plug-in is for both Photoshop and After Effects.  Once you’ve added it to your plug-ins, it will come up in AE’s output module with the parameters looking a little like the below image. 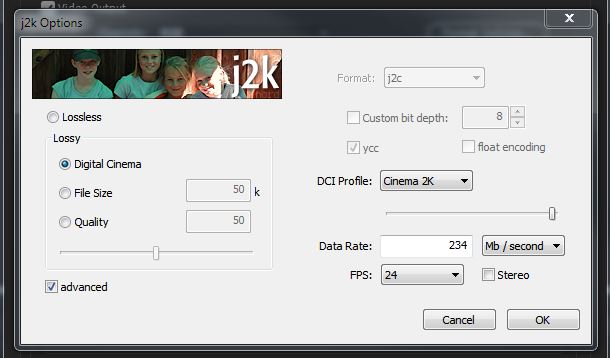 Now, I want to also mention that there is a DaVinci Resolve workflow for creating DCP’s, but I’ll also dedicate an article to just that application, as I mostly use it as a JPEG 2000 conversion tool, and not so much as an editor!

This is probably the most important part of the entire process, and one that you need to make sure you get right, as the last thing that you want is to be trying to deliver your final DCP to the theatre and they keep rejecting it due to something simple like the naming being incorrect, or the DCP not ingesting into their player.  You really, really need to make sure you have access to a DCP player, so you can properly QC your final DCP.  Checking it in the creation application is not enough.  Computer will play just about anything.  If your DCP isn’t created properly, the machine just won’t ingest, and chances are, won’t give you much of a reason why it won’t ingest, it just won’t do it.  This will require a little bit more money on your part, as you will need to have your DCP (depending on its size) on either a USB key or an external Hard Drive, to a facility that has a playout machine, but it’s worth the little bit of extra cost to do this, to avoid any hassles down the line.

Okay, I think that’s good enough to get started.  We’re going to cover everything you need to know, in depth, as we move along talking about the NLE’s and the actual DCP creation process itself!