Building upon a foundation of science, partnership, and field work, Conservation International (CI) seeks global solutions to problems that threaten the health of the planet’s ecosystems. The visual storytelling team at CI uses video as a primary way to communicate how the organization’s projects protect nature, empower communities, and shape public policy. Peter Stonier, senior director of visual storytelling, and John Martin, director of production at CI, rely on Adobe Creative Cloud, including Adobe Premiere Pro CC and Adobe After Effects CC, to aid their visual storytelling efforts.

Adobe: What is the mission of Conservation International?
Stonier: CI is an environmental organization with two distinguishing features. First, our mission focuses on conserving the environment for the well-being of humanity, not just for the environment’s sake. Our latest campaign message is that nature doesn’t need people, people need nature.

Second, because CI started as the international arm of the Nature Conservancy, our work tends to be outside the U.S. and Europe. We mostly work in remote areas around the equator because CI is dedicated to preserving wilderness areas that are vital to the health of the biosphere. 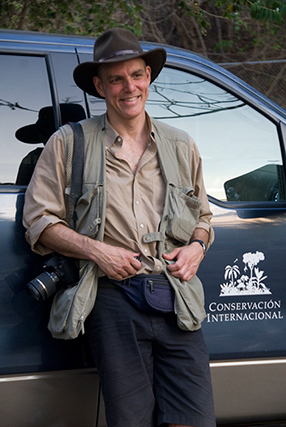 Adobe: How does the visual storytelling team contribute to the success of CI?
Martin: I’ve been at CI for 14 years in visual media production supporting field programs with awareness campaigns. Video remains the centerpiece of these campaigns that are supported with a myriad of visual products, such as posters, brochures, logo designs, PSAs for television in-country, and anything visual or photographic.

We’ve maintained a high standard of quality for what we shoot in the field in terms of film and photography. We believe the more beautiful and compelling an image is, the more traction it will get. When we do press releases with high-quality visuals, we have a bigger chance of getting our story picked up. 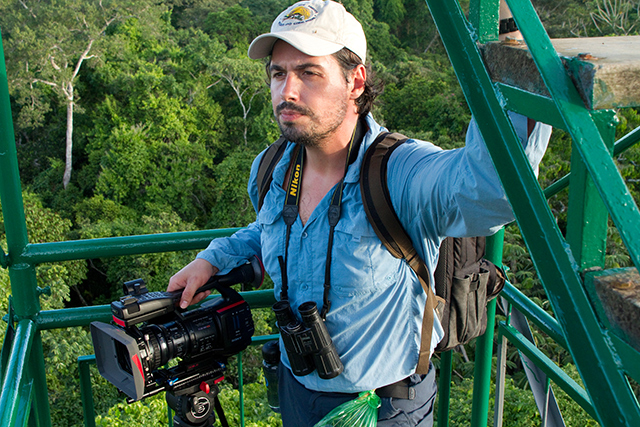 Stonier: Our unit started as a group that was sent to film what was going on in remote areas and bring those stories back to the rest of the world. Today, it’s evolved into highlighting solutions to big environmental challenges. We go to places where CI has a successful project that could be replicated elsewhere and, if taken to scale, could really make a global difference. Visual storytelling is an important part of turning successful prototypes into big programs.

Adobe: What is the typical workflow for one of your projects?
Stonier: The post-production workflow is pretty straightforward. We get our raw video transcribed and use the transcriptions to do a draft script. Sometimes we’ll storyboard with a graphic artist, but we edit the script on paper first, then we do initial cuts in Adobe Premiere Pro CC. As we do the initial cutting, we’ll put in placeholder graphics along the way. If we have a general graphic concept we want to execute, but haven’t figured out, we’ll mark that on the screen. When we get the main edit done, we get use Adobe After Effects CC to create all of our graphics. Once we have picture lock, we go to sound design and final audio mix.

Adobe: What do you like about working with Adobe Premiere Pro?
Martin: We work with many different cameras, and Adobe Premiere Pro lets us ingest assets in their native formats and work with them immediately. Eliminating the need to transcode saves time and effort and provides a lot of flexibility. Mixing formats on a single timeline without losing system performance or image quality is a tremendous benefit to us.

Adobe: How often are you delivering content?
Stonier: We typically complete something about every two to three weeks. You can see our videos on civisualstory.org. Most of them are only a few minutes long. We also do half-hour programs. Of course, which take longer to complete.

Martin: We also produce multiple versions of videos for different audiences. We might have a two-minute video and a five-minute video on the same topic. Or two five-minute videos, but one emphasizes indigenous people’s rights and another focuses on resource conservation.

Adobe: Are you using other solutions in Adobe Creative Cloud?
Martin: We have a graphic design team with four designers who are outside of the visual storytelling team, but are part of CI’s communications marketing and branding branch. We are all using Creative Cloud.

For photography we use Adobe Photoshop Lightroom quite broadly for photo organization, archival, distribution, and delivery. Many of the photographers we work with at CI also use Lightroom.

Stonier: We wouldn’t be able to do the type and quality of work we are doing without Adobe Creative Cloud. Adobe has brought down the price/quality ratio of video production so we can produce broadcast quality work on an NGO budget. Traveling around the world to create videos used to require an audience of millions of people for the producer to recoup the investment through advertising. Communicating about the environment to a small group of government officials or key decision makers could only be done with print, photos, and PowerPoint. Now, we can do high-quality video production because of the tools in Creative Cloud.

Adobe: Where do you get your story ideas?
Stonier: Our story ideas are natural extensions of our projects. Right now, we are producing content for our Vital Signs program, which tracks agriculture, ecosystems, and human well-being to learn more about feeding people without undermining the sustainability of nature. To illustrate the value of Vital Signs, we went to Tanzania expecting to create a whole package of stories, not just one piece.

To show how climate variability affects people, we found this wonderful woman, Mama Churi, who grows rice, farms fish, and tends beehives for honey. We spent a day-and-a-half filming her and her family to give small-holder farmers like Mama Churi a face and a voice. Another piece for Vital Signs involves a team of scientists. We traveled with them while the collected data to get a sense of their lives on the road.

Adobe: Is your primary goal to increase awareness?
Stonier: We do want to build awareness, but we also want to mobilize resources for projects and change legislation. Each project focuses on getting conservation results first and public awareness second. Our approach is to target audiences that can be as small as one person, if that is what will affect change. For example, we did a package specifically for the president of Columbia that resulted in the allocation of several million dollars and changes in legislation in Colombia to protect an environmentally sensitive area. Public awareness followed as a result.

Adobe: What will you be doing next?
Stonier: First, we have to finish editing our stories from Tanzania. Our next field project will be in Indonesia. CI has been involved in helping local partners sustainably manage the costal and marine resources of Bird’s Head Seascape near West Papua for about ten years. The Seascape is a marine area considered a major center of marine biodiversity and CI is helping it become a model for community-driven conservation. They say it’s the best diving on Earth and has more species of coral than the Caribbean Sea. We’ll be heading there in the April-May timeframe. I’m really looking forward to it.