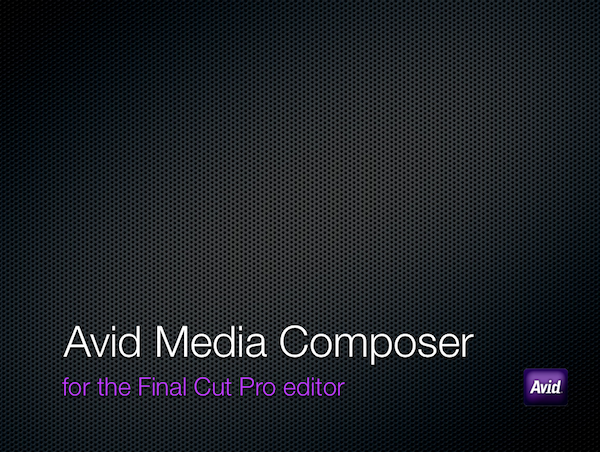 I’m very excited for my trip to the National Association of Broadcasters convention this year as I’ll be leading a couple of the In Depth sessions of the Post|Production world conference. The first, on Tuesday morning from 10:00 am to 1:00 pm and part of the Avid Editing Workshop is, Avid Media Composer for Final Cut Pro Editors. The second, Wednesday at 10:00 am, is Music Video Workflow. You must register to attend the educational part of the NAB show (unfortunately it’s not free) at the Post|Production World conference.

Avid Media Composer for Final Cut Pro Editors isn’t meant to be an epic battle royal© between the two applications where we compare and contrast item by item, or feature by feature. Instead it’s meant to take a look at Avid Media Composer through the eyes of an editor who either spent their whole editing career on Final Cut Pro or an editor who has an idea of what Avid is all about but still spends most of their time cutting on FCP.

The class description is this:

This course will look at using Avid Media Composer from the perspective of the editor who uses Final Cut Pro on a regular basis. We will take a project from initial ingest of footage through to the final output and finishing. This course can be for the experienced Final Cut Pro editor who wants to move to Avid or those that might be curious about other editing options outside of what Apple has to offer.

Why offer such a class?

It’s worth asking the question of why even have an Avid Media Composer for Final Cut Pro Editors class at all? First and foremost, Avid offers something that most all of the other major NLE producers do not: a free, full-featured demo. To me this is solid reasoning behind offering any type of beginner / here’s what the competition has to offer type of class. It allows those attending to leave the class with a bit of knowledge and some good exposure to the basics of an application and then be able to use the software on their own time, maybe in a real world situation. A full featured demo means the user won’t be hindered by limitations that shut the program down after a predetermined time limit, watermark the output of media and/or impose limitations on the tools in the software. While 30 days isn’t enough time to become an expert at using Media Composer (or pretty much any professional piece of software) it is enough time to really dive into the feature set and see what the program is all about. Couple that demo with a class like Avid Media Composer for Final Cut Pro Editors and I think an editor will be able to make a very informed buying decision.

Another reason I wanted to teach this class is I think that Avid as a company, and Media Composer in particular, often falls victim to the Apple-hype machine. Sure, there are users out there who have spent a lot of time working on both applications and have grown to hate one or the other. But truthfully I think those users are the exception and not the norm as most editors I talk to who do use, or have used, both will admit that they think there are some very strong features and performance advantages of one over the other. But those advantages very much depend on both the editor and the type or projects on which they are working.

Also, whenever Apple announces or delivers any product or update you’ll usually see a disproportionate amount of coverage around the web, on discussion boards and via Twitter about anything Apple vs. anything from most any other company (okay, with the exception of maybe RED). A minor update to Final Cut Pro doesn’t shake the Earth, except for the fact they seem few and far between these days, but to look around the Interwebs you’d often think that Apple had just reinvented post-production as we know it with something as minor as a Pro Apps bug fix. I’m often guilty of this too as Apple discussion generates more discussion in general and that’s part of the reason many of us blog, Facebook and Twitter: to engage in conversations about our chosen profession. While I may be exaggerating slightly here, it would appear that there’s way more to the Final Cut Pro universe in general that of the Avid-world.

I also think we’re in a very interesting time for post-production software in general. As computer hardware gets faster and faster our applications are doing more and more, often in realtime. We have been seeing a period of about 2 – 3 years now where two of the three “big A’s” of post-production have been working very hard at updating their applications. Adobe have gone from CS3 to the soon to be released CS5 in just a few years and have made significant advances across the entire suite of applications. Avid introduced Media Composer 3 at NAB 2008 and finally gave editors the release they had been asking for, speed and stability, and have been building on that with new features ever since. Apple dropped Final Cut Studio 2 at NAB 2007 and have since only delivered one new version, in Final Cut Studio (2009) which IMHO didn’t make the advances that any of the Adobe or Avid upgrades did. While I love my iPhone (and hopefully my iPad), as a professional editor who makes his living using these tools I want to see them moving forward at a regular pace. For the record, I don’t think Apple is going to dump Final Cut Studio (at least not until the decide they don’t want to make Mac Pros anymore) or sell it to another company but I doubt they will ever put the software suite on the fast track of upgrades the way we have seen both Adobe and Avid do in recent years. And in the interest of full disclosure, I’m on the current Avid Independent Video Professionals Customer Advisory Board. No one on this board receives any payment for their time or financial incentives to praise Avid or their products. But what the organization of this board says to me is that Avid is actually listening to customers and working very hard to make their products better. Since I use their products to help make a living and feed my family I want them to be the best that they can be, just like I want Apple and Adobe’s products to be the best they can be as well. It just feels like Avid and Adobe have been listening to their pro-video customers a lot more these last couple of years than Apple has.

Hmmm …. this post has turned into more of a commentary on the perception of the two applications so let’s get back to the topic at hand, the Avid Media Composer for Final Cut Pro Editors class itself. 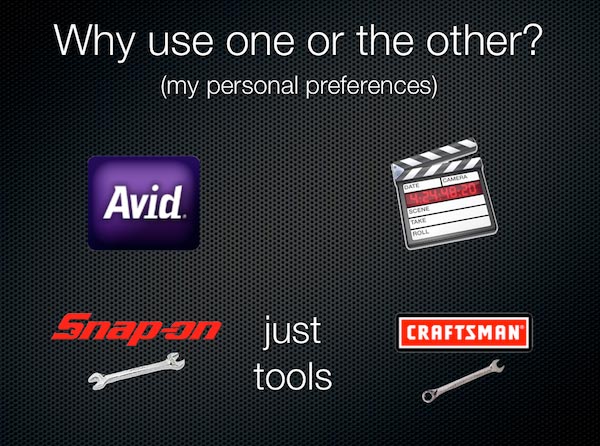 What we’ll do in this class is attempt to take media into an Avid Media Composer project from initial ingest of the footage all the way through to final finishing and output. That’s a lot to cover in only 3 hours (including breaks) but I think it’s important for those curious about Avid Media Composer to get a taste of all aspects of the application. Most people taking this class will probably already have a good knowledge of the process and how Final Cut Pro handles most tasks over the course of an edit so we won’t spend a lot of time explaining what the particular parts of the process might be; just how MC Soft handles this vs. how FCP handles that.

Here’s a quick outline of what we’ll cover:

If you have any other topics or ideas of discussion about the class (or if you plan to attend) then feel free to comment below, or shoot me an email. I hope to see you in Vegas!