This is the second of three chapters in CMG5 focus on the tools available in After Effects CS5 for motion tracking and stabilization, including the bundled 3rd party tools mocha and mocha shape. As the built-in tracker and stabilizer share many of the same tools, in the previous chapter on Motion Stabilization we covered the concepts and user interface elements that were common to both of them. In this chapter, we discuss the additional features required to make one layer follow a feature in another layer.

There are numerous scripts available to enhance the power of the After?Effects tracker. One of the best is TrackerViz, which “provides a tool box for visualizing positional data. Initially it was designed for manipulating tracking data, like averaging multiple trackers to get a better one, or visualizing trackers as little solids for better control. Now the script offers many more features. (…) You can work with path, and can create a new tracker from path vertices, and reversely (sic) you can create a new path based on an analyzed track” (in other words, you can make a mask path follow the results of a track). 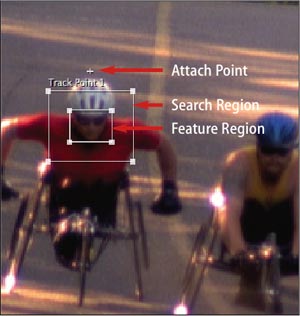 Adjusting the Tracking Regions Without Moving the Attach Point

With stabilization, the inverse of the tracking data is applied to the Anchor Point of the layer you tracked to make it appear stable. With tracking, the tracking data is usually applied to a second layer, hopefully making that layer move as if it were pinned to a feature in the layer you tracked. Key to this is the Attach Point – the crosshair that defaults to the center of the Tracking Regions – as this indicates where the Anchor Point of that second layer will be located.

Because moving the regions can accidentally move the Attach Point (but not vice versa), get in the habit of setting your Tracking Region(s) first, then placing your Attach Point. If you realize you set up the Attach Point in the wrong place after you performed the track, you can fix it using the Motion Trackers > Tracker 1 > Track Point 1 > Attach Point Offset parameter. This offset is used only when you click Apply; it does not fix the motion path after you’ve already applied it. 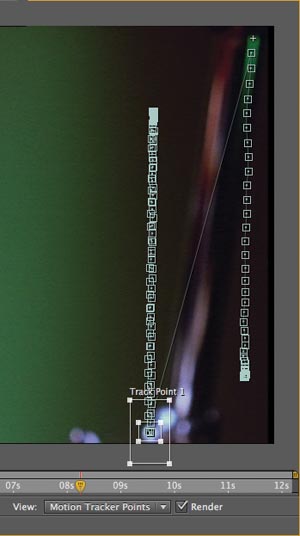 A feature that’s good to track might also not be present for an entire shot. In that case, you need to pick a feature, track it as long as it is viable, stop, back up to the last good tracked frame, then choose a new feature to track from there forward (until it too is no longer viable).

The secret to continuing a track with a new feature is to hold down the Option (Alt) key while adjusting the Track Point. As mentioned above, this will leave the Attach Point (the + symbol) in its current position. You will see the track motion path extending from the old track keyframes to your new position, as shown at right. Once you have set the new Feature and Search Regions, again click Analyze Forward in the Tracker panel.

There are a couple of ways to tweak the results after you’ve applied the tracker. Select the layer that has had the track applied to it and press U to reveal its keyframes. Click on Position to select all of the keyframes, and make sure the Current Time Indicator is parked on one of them (the keyframe navigator box in the Timeline panel will have a check mark in it). Use the cursor keys to nudge the layer directly in the Composition panel.

You can also offset the Anchor Point of the tracked layer to change its relationship to the master layer it follows, which is particularly useful if you need to change the center around which it scales and rotates.

Many advanced users prefer to initially apply the result of a track to a Null Object. You can later attach the real layer to the null using parenting, offsetting the layer as needed. Get in the habit of adding a Layer > New > Null Object to your comp before starting a track. 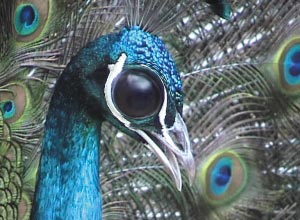 The Motion Tracker also allows you to have an Effect Point – such as the center of Distort > Bulge – follow a feature of the layer you are tracking. First apply the effect you want to the layer, then use the Tracker.

In the example here, we first applied a bulge effect to the peacock footage. We then tracked the peacock’s eyeball, placing the Attach Point at the center of the eye. After analyzing, we clicked on Edit Target, and selected Effect Point Control instead of Layer for the Apply Motion To option. We made sure that the target was set to Bulge/Bulge Center. Then all we had to do was click OK, then Apply, choosing both dimensions so that the bulge would follow the eye in both the X and Y directions.