If you can copy and paste it, you can save it: That is the philosophy behind Animation Presets. Presets allow you to save static values or keyframed animations for text, masks, effects, layer styles, and transformations. These presets are saved to individual files on disk and presented in the Effects & Presets panel for later application to any layer in any project. You can later edit these values to suit their new application.

In addition to being able to create your own presets, Adobe provides hundreds of factory presets that include effects, text, and shapes. These include one of favorite presets, Behaviors; these allow you to animate layers without applying keyframes or expressions. This chapter also explores Brainstorm, which allows you to select any combination of effects, keyframes, and parameters and have After Effects automatically generate variations for you to check out. Below are a few tips from this chapter:

Perhaps the easiest way to learn about Animation Presets is to use them. Open an After Effects project that includes some interesting animated layers that you’d like to apply the same animation to another layer.

First select some properties (masks, effects, transformation, layer styles, and so on) in the Timeline. When you select a property name, all of its keyframes will be selected. By selecting the name of an effect, you’ll make sure you capture all of its parameters as well as any keyframes or expressions that have been applied. Remember you can only save attributes that you can copy and paste, so layer-based switches and popups – such blend modes or the status of the motion blur switch – cannot be included in your selection.

In the figure above, we revealed all modified properties by typing UU, then Shift+selected their names in the Timeline panel. Selecting an effect’s name will grab all of its parameters and keyframes, even though they are not highlighted.

There are several ways to save an Animation Preset; the following methods all have the same result – so decide which is the easiest for you to learn and remember. Most of these require the Window > Effects & Presets panel to be open and forward.

In all cases, you will be presented with a Save Animation Preset dialog. Enter a name that describes the animation, such as “blur scale fade in.ffx” for your preset, then click Save. (The file extension .ffx should be used for all presets. This extension will not appear in the Effects & Presets panel.) Try to use words in the name of your preset that you can be useful to search on later, such as “blur” or “tint” and so on.

Where to Save Presets

You can create your own subfolders to keep your presets organized. Saving somewhere inside User Presets (or Adobe After Effects CS5 > Presets) will result in your new presets appearing in the * Animation Presets folder in the Effects and Presets panel. If you save them anywhere else, they won’t appear in this panel, although you can still open them from the Animation menu. 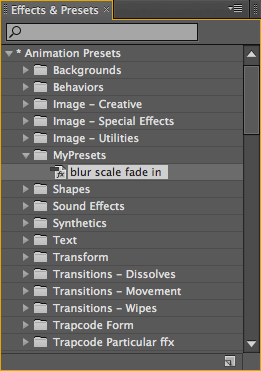 To apply your preset to another layer, select it and type I to locate to its in point. This is important, because when you apply a preset that has keyframes, the timing of the keyframes is relative to the placement of the time indicator when you apply the preset.

Also, make sure you deselect any masks and effects you wish to leave unaffected! To give an example, if you have an effect selected, and the the preset you’re about to apply uses the same effect, the preset will replace the selected effect rather than add another instance of the effect. Shift+F2 deselects all masks, keyframes, and effects without deselecting the layer itself.

Yes, you could have just copied and pasted these parameters. The advantage of going the preset route is that you can easily apply this same set of parameters anytime in the future, in any composition or project, without the need to hunt down the original source layer.

If you don’t like a preset, it’s best to Undo rather than try to remove the masks, effects and other attributes you believe were applied – it’s too easy to miss something!

Note that unlike “styles” or “instances” in other applications, resaving an Animation Preset will not dynamically update layers that you had previously applied the preset to. If you need to create instances, check out the script ft-Effect Instance by Francois Tarlier, available from aescripts.com.

Presets also remember Expressions – pieces of JavaScript code that tie parameters together – applied to the properties you copy, which makes presets a great tool for saving and reusing expressions. Expressions are covered in user-friendly depth in Chapter 37; the biggest gotcha here is if you save a preset with an expression that refers to another effect, layer, or comp by name, After Effects will complain when you apply this preset if it cannot find the same name it is looking for. You can usually just relink the expression to make After Effects happy again. When creating expressions, it helps to refer to generic layer names such as “Camera 1” or “Solid 1”.

In addition to being able to save and apply your own presets, After Effects ships with hundreds of ready-made presets for you to employ. Below we’ll use Adobe Bridge to explore and apply some of the hundreds of Text Animation Presets. Start by creating some text that you’d like to animate using the After Effects Type tool (if you don’t select a text layer, After Effects will create some dummy text for you).

Next, select the text layer, then choose Browse Presets from either the Animation or Effects & Presets Options menu. This opens Adobe Bridge, placing you in the Presets folder. Double-click the Text subfolder, and you will see another group of subfolders showing the many different categories of text presets. Click once on a preset to preview the animation in Bridge: 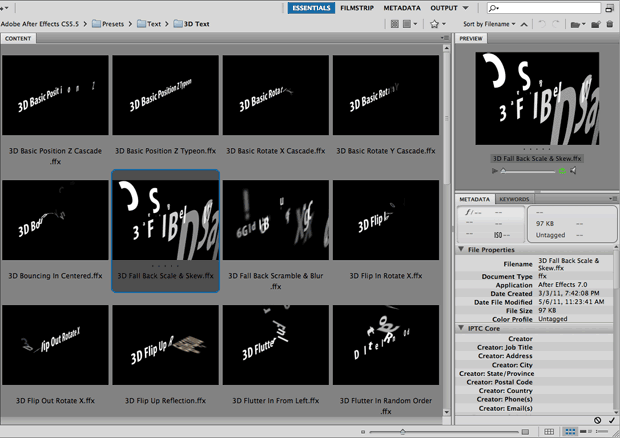 In addition to the presets that are bundled with After Effects (some of which are shown above), Adobe has posted over 300 additional Shape and 3D Text presets for After Effects on its Exchange website. Visit share.studio.adobe.com and go to the After Effects section to see all of what’s available.

When you find a preset you like, double-click it. You will be returned to After Effects and this preset will be applied to your text layer. RAM Preview. To figure out how it was created, type U to see which parameters are animated, or UU to check which parameters have been changed from their default values.

If you don’t like the animation, be sure to Undo to remove the preset and return to the original text, don’t just remove Animator 1 as you don’t know what else the preset changed! Press Home to return to 00:00 (remember: presets apply their keyframes starting at the current time). Return to Bridge and double-click a different one.

Since Animation Presets create normal keyframes, you can customize them any way you like by editing those keyframes – for example, by moving them closer together to speed up the animation, changing their values, adding eases (Animation > Keyframe Assistant > Easy Ease), or deleting keyframes or effects that aren’t needed or desired. 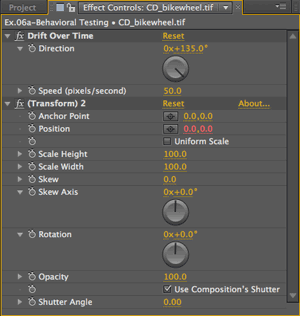 One of our favorite categories of presets is Behaviors. These use a combination of effects and expressions to automatically animate a layer without the need for keyframes – instead, you set general values such as “move the layer in this direction at this speed.” Here’s a few of our favorites, as well as suggestions on how to preview them.

Create a comp with a few layers in it, and select a layer. In the Effects & Presets panel, twirl open Animation Presets > Presets, and twirl open Behaviors. Double-click Drift Over Time to apply it. RAM Preview; your layer will slowly drift. The Drift Over Time behavior is handy to apply to text layers so that the title doesn’t have to stop moving after it’s animated on.

The Effect Controls panel should have opened when you applied this preset (if not, press F3); at the top are the custom controls. The first effect contains the custom controls; the Transform effect does the leavy lifting thanks to expressions under the hood. 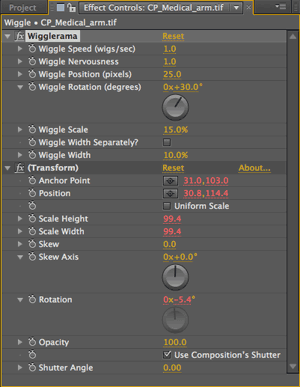 Some behaviors can be combined. For example, double-click Behaviors > Fade In+Out – frames to add it to your currently-selected layer. RAM Preview; the layer will fade in and out at the ends of the layer without having to set any opacity keyframes. You can edit the Fade In and Fade Out Durations in the Effect Controls panel.

On a separate layer, apply Behaviors > Wigglerama. RAM Preview; now your layer wiggles its position, scale and rotation randomly, without having to write your own wiggle expression (which is discussed in detail in Chapter 37).

Note: The Wiggle and Scale Bounce Behavior animation presets do not get along with any layer that is continuously rasterized, including all text and shape layers. If you enable the Continuous Rasterization switch for a layer that has one of these Behaviors attached, they will transform around the upper left corner instead of their anchor point.

Also try out the Autoscroll behaviors; RAM Preview to see an endless succession of your layer repeated across your screen. The advantage of using Autoscroll instead of the Offset effect is that the speed can be set in pixels per second, and because the behavior uses Motion Tile it can also use the layer’s motion blur setting:

In addition to the Fade In+Out behaviors where you can define the fade times in frames or seconds, the Fade In and Fade Out Over Layer Below behaviors automatically adjust their fade times based on how much a layer overlaps the next one in the timeline.