A compound effect is one that looks at a second layer to decide exactly how to treat the layer it is applied to. Examples of these vary from Compound Blur and its brethren, which can selectively blur one layer based on the varying luminance values of another, to Texturize, which is great for simulating those embossed station identity bugs most networks use these days, among other things.

Before we get into hidden gems on using Compound Effects, first we need to understand what is going on underneath the hood:

When an effect is applied to the movie, and that effect is told to refer to a second “map” layer for data, it’s capable of seeing the modifying layer only at its “source” – before any masks, effects, or transformations have been applied to it. In other words, it uses the modifying layer as it would appear in its own Layer panel with View set to None – not in the Comp panel. Hence, no scaling or positioning of the logo layer is taken into account by the compound effect: 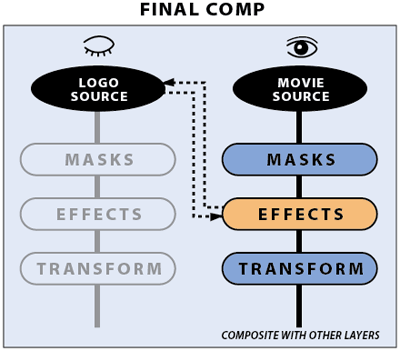 When a compound effect, such as Texturize, is applied to a layer, the effect looks at just the source of the modifying layer and ignores any masks, effects, or transformations that may be applied to the “map” layer.

The trick, then, is to present the effect module with a modifying layer that’s the same size (or at least the same aspect ratio) as the layer being effected, and with any attributes already applied to the modifying layer. You do that by preparing the map in a precomp that is the same size as the layer being effected. You can position, scale, and otherwise transform – as well as animate, mask and effect – the modifying source in this precomp, and the result will then be applied faithfully by the compound effect in the main comp: 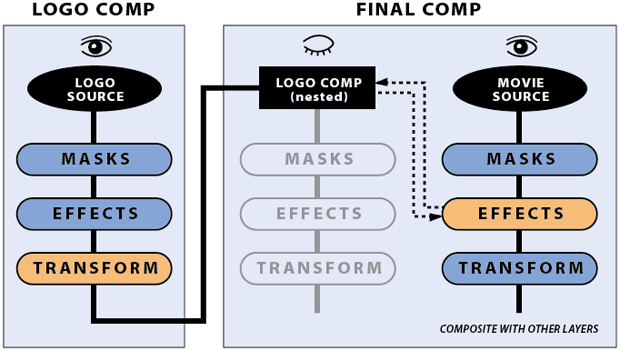 Apply any transformations (for example, scale and position the logo bug) to the modifying layer in its own precomp, and nest this into the comp with the layer that gets the compound effect (Texturize in this example). Now the effect will take the transformations applied to the bug into account when it processes.

If you have trouble following that explanation, perhaps the following movie will be more clear (this was included in our post last week of free movies we’ve created about effects):

Why Isn’t It Working?

If you’re having problems getting a compound effect to work as you expect, here is a summary of the most common reasons compound effects don’t seem to work initially:

Compound Blur (top) is a bit smooshy; Camera Lens Blur (above) yields a better simulation of an actual camera, providing a “squinty” sort of look.

(If you want to learn more about the new Camera Lens Blur effect aside from its compound blur applications, a movie on it was included as part of our After Effects CS.5 review – it’s the last video on this page.)

The Displacement Map effect can cause pixels to be pulled away from the edges of the original layer, potentially exposing other layers or the comp’s Background Color underneath, as seen below. Enabling Wrap Pixels Around can help, but may still result in unsightly edge artifacts. If you can’t rely on the edges being cropped off by a monitor’s bezel, you might want to scale up the result slightly to let the composition boundaries crop off the undesired bits. 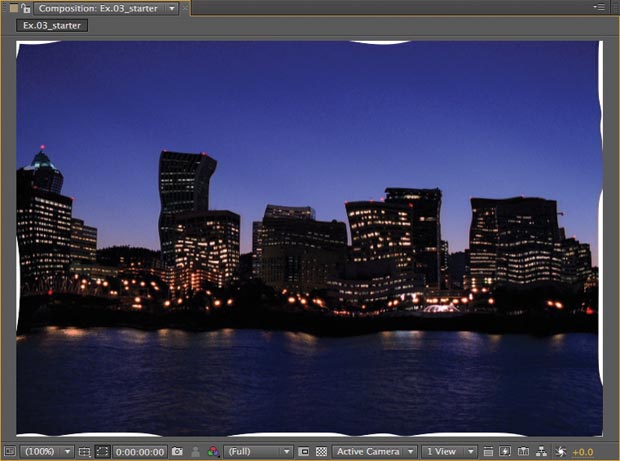 A map layer that has sharp, high-contrast transitions can sometimes cause aliasing-type artifacts as a compound effect switches its processing suddenly at those transitions. It is often helpful to add a slight blur to the map layer – in a precomp, of course (as compound effects don’t look at effects applied to map layers in the same comp).

In addition to the tips in Chapter 24 of CMG5, we also wrote an article for Artbeats.com on using the Displacement Map effect to make text appear to be projected onto the contours present in a video clip.