Continuing with Part 5, Precomposing is the second of three chapters that show you how to build a hierarchy of comps. In the previous chapter, we explained that nesting is used to group layers and fix visual problems caused by the default 2D render order. You’ll find that nesting is an intuitive way to create a chain of comps when you’re planning ahead. However, predicting exactly how many comps will be needed to build an animation is difficult; you may need to insert a comp in the middle of an existing hierarchy. That’s where precomposing comes in.

The third chapter in this series, Collapsing Transformations, will cover specific issues that arise when nesting and precomposing comps containing 3D layers.

Precompose is used primarily for the same reasons you would use nesting – grouping layers and manipulating the rendering order. The difference is that nesting implies moving up the hierarchy; when you precompose, you’re inserting an intermediate comp lower down in an existing hierarchy. You could think of it almost as nesting backward: The precomp created is always rendered first, before the original comp.

Just as with nesting compositions, all layers remain “live” for further editing. Simply double-click a nested comp layer to open it for further editing. You can switch back and forth between the precomp and the original comp using the tabs in the Timeline panel or by using the Composition Navigator (covered in Chapter 18). Note that if you need to open the Layer panel, Option+double-click on Mac (Alt+double-click on Windows) the nested comp layer. 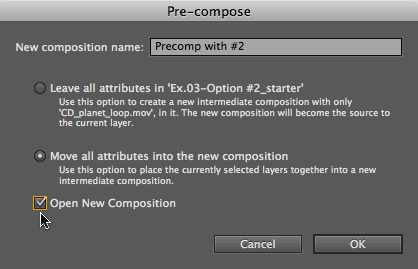 The Pre-compose dialog offers two options: Leave all attributes in “current comp”, or Move all attributes to the new composition. Attributes refers to the values and keyframes for masks, effects, transformations, blending modes, layer styles, trimming, and so on.

When you precompose multiple layers, only the second option, Move All Attributes, is available because the relationship between the layers can be maintained only if their attributes are kept intact. The layers that are precomposed will appear as one layer in the original comp so you can animate and effect them as a group.

To summarize Option #2, Move All Attributes: 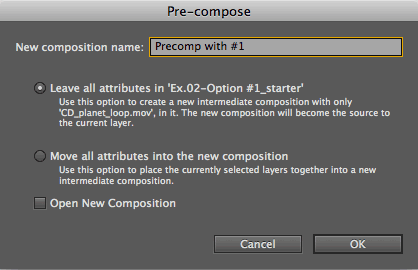 Precomposing a single layer is used to solve unforeseen rendering order problems. The solution to problems with the default rendering order is to reverse the order of some events by spreading the layer across two comps, so you can pick and choose which step happens in which comp.

To summarize what happens when you use Option #1, Leave All Attributes: 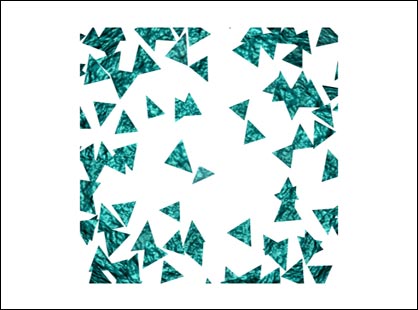