Chapter 11 covers the art of track mattes: borrowing the luminance or alpha channel from one layer to serve as a new alpha channel for the layer underneath. In the book, we talk about how to optimize mattes, the ability to animate the matte and/or “fill” layers independently from each other, strategies for keeping the two component layers together, and other important techniques. Here are a few tips and gotchas that might not be apparent from just poking around in the program, starting simple and ending complex:

We’ll start with the basics – although everyone gets caught out by at least one these at some point in their time with After Effects:

When the TrkMat (track matte) popup has been set for a fill layer, both it and the matte layer above get special icons next to their names in the Timeline panel, indicating the matte (on top) and the filled result (underneath).

(So, when would you want the Video switch for the matter layer turned on? You may wish to turn it on temporarily as you apply effects to it or animate it. Just remember to turn it off when you’re done!)

You Can See It All

The TrkMat popup exists in the same column as Blending Modes, which normally shares space with the Switches column. To flip between them, click the Toggle Switches/Modes at the bottom of the column in the Timeline panel, or just press F4.

However, if you have a wide enough monitor, you can see both at the same time: Just right-click on any Timeline panel column header (those Mac users still suffering with a one-button mouse can Control-click), and select whatever columns you want to see or hide. You can then re-arrange columns by clicking on their headers and dragging them left and right.

Not All Colors are Created Equal

A Luma Matte derives the overall luminance value from an RGB matte image to determine how transparent or opaque to make the pixels in the fill layer. If you’re using a color image for your matte (such as the one below on the left), there’s a good chance its luminance values may be lacking (below center), and that the result may be more transparent or washed-out than you hoped (below right): 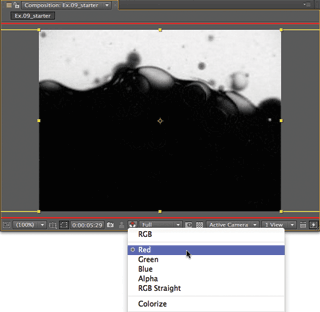 Instead, you want to pick the color channel in the matte layer that has the best contrast. To do this, turn on the Video and Solo switches for the matte layer to see it in isolation. Then use the Show Channel popup along the bottom of the Composition panel to audition the various color channels to see which works best.

Return Show Channel to RGB, and apply Effect > Channel > Calculations to the matte layer. Set the Input Channel popup the color you chose above. If necessary, follow this with Effect > Color Correction > Levels and use the Input Black and White as well as Gamma controls to maximize the contrast. Then turn off the matte layer’s Video and Solo switches, and you will have a better matte: 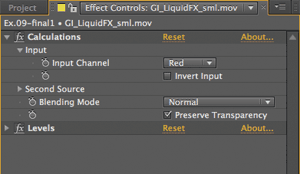 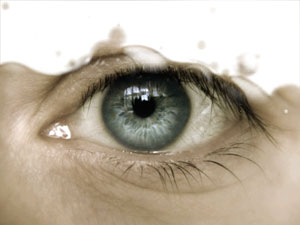 A common source of frustration when working with track mattes is you can’t seem to get shadows or other edge treatments to work properly. If you apply them to the fill layer, the matte layer usually chops off these treatments; if you apply them to the matte layer, they just alter the alpha channel of the resulting composite – not the color channels.

To work around this, place the track matte layers in their own composition and then effect this “nested” composition in a new comp downstream. Or: You can take advantage of Layer Styles. Borrowed from Photoshop, the little-known Layer Styles have a unique place in the internal rendering pipeline, being processed after the track matte is calculated. Just select the fill layer (the one on the bottom), and apply Layer > Layer Styles > Drop Shadow or any other desired treatment, such as Bevel and Emboss. 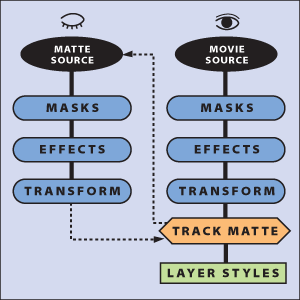 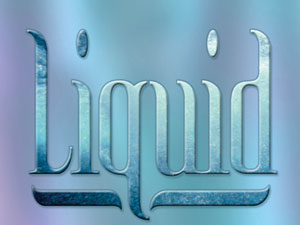 The movie and the matte each have their own set of Masks, Effects and Transformations, which are calculated before the Track Matte module. Layer Styles applied to the fill layer render after the Track Matte is calculated. 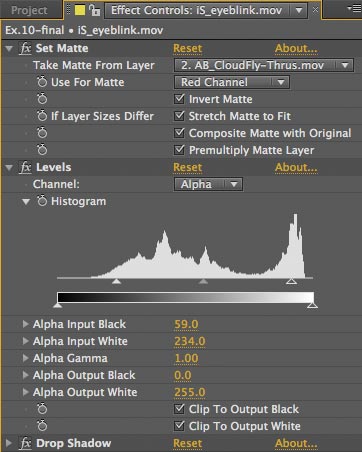 Multiple Mattes from One Source

Track Mattes require that their component layers be kept in pairs. However, sometimes you want to use the same source as a matte for multiple fill layers. If you don’t feel like duplicating the same source every time you need it inside a composition, you can try Effect > Channel > Set Matte instead.

Set Matte is applied to the fill layer, where it can then select any channel from itself or another layer to use as a matte, regardless of its placement in the layer stack. Since the Set Matte effect determines the transparency of the movie, you can then follow it with normal edge treatment effects such as a Drop Shadow, and they will work on the fill as expected. If you want to affect the strength or contrast of the matte, you can still use Levels (applied immediately after the Set Matte effect), but you must set its Channel popup to Alpha rather than the default RGB. An example of such a hierarchy is shown here.

The biggest drawback is that Set Matte is a “compound” effect, which in short means that any effects or animation applied to the matte layer must take place in a precomp.

Another solution for applying a single matte to multiple layers is to use a stencil, and that will be the topic of our next installment.