GoPro Cineform, aka the SMPTE ST 2073 VC-5 video compression standard, is a cross platform codec that in Creative Cloud piggybacks onto QuickTime (warts and all). The codec is available in Adobe video apps in CC 2014.1, and plays system-wide if you download the free player or free GoPro Studio app. GoPro Cineform is a wavelet-based codec that holds up well even after multiple encodes, and features full support for alpha and large frame sizes of 4K and beyond. One important takeaway is that the higher quality options seem to produce smaller files than the lower quality option. 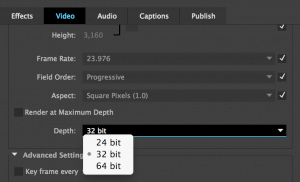 While Adobe does offer information on GoPro Cineform in Premiere Help and especially on blog posts (see below), render quality slider settings are a little less mysterious if you visit the Cineform forum. There Jake Segraves posted Understanding CineForm Quality Settings.

The numbers on the Quality slider control the levels of spatial compression, and Cineform had been recommending setting 3 or 4:

On October 31, Tim Kurkoski of Adobe posted clarifications of labels and other details in GoPro CineForm codec settings in After Effects, Premiere Pro, and Adobe Media Encoder CC 2014.1. He says that “the GoPro CineForm codec can encode pixels in YUV 4:2:2 at 10 bits per channel, or RGBA 4:4:4:4 at 12 bits per channel.” Updates coming soon should straighten out naming issues.

The information in this article will follow the Adobe blog by the AE team rather than information from other official sources, if they differ.

Exporting from Premiere, Adobe Media Encoder (AME) has 3 color depth options, though the corresponding Presets under the QuickTime option may use other terms. According to Adobe, the options are really: 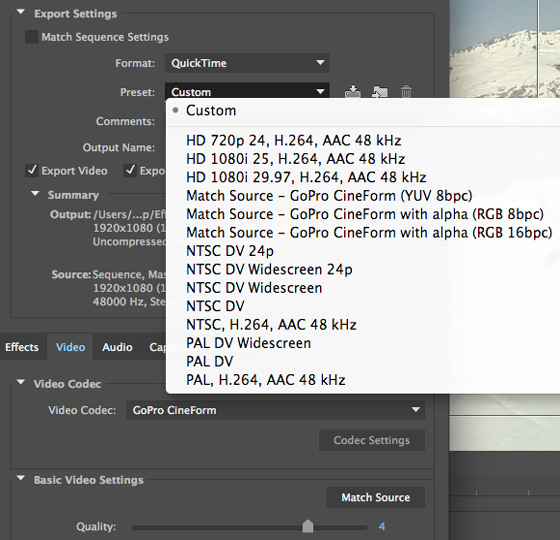 The UI is a bit murkier in After Effects, and uses different naming than Premiere Pro. In the Render Que Output Module Settings, you can choose QuickTime Format Options > GoPro CineForm. There’s one RGB and two RGBA Channels settings. Setting Channels to RGB or Alpha will encode to 10-bpc YUV. Settings Channels to RGB+Alpha will encode to 12-bpc RGBA, regardless of the Depth setting. There are no Presets to Match Settings and color depth when rendering from AE.

If instead you Export from AE to AME, the spatial quality slider has a range of 1 to 100, but it’s not clear if there are really more than 5 levels of quality (using AE v13.1.1.3, but perhaps that’s preview code leftover). For color depth, you get a choice of 24 bit or 32 bit in RGB, but those are misnomers. Setting Depth to “24-bit” (8-bpc) will encode to 10-bpc YUV.

Oddly, the Millions+ option renders a slightly larger file than the Trillions+ option (the options are apparently identical). But both of those flavors of the RGBA 12 bpc 4:4:4:4 codec render files smaller than 10-bpc YUV 4:2:2, regardless of the Project’s bit depth. Thoughts on this can be found in QuickTime 16-bit (“QuickTime truly sucks”) by CineForm co-founder David Newman. It seems likely that the Adobe version of Cineform is using the equivalent of the “Force 16-bit” encoding option found in the standalone version of Cineform (to avoid QT dithering). In tests here, the important takeaway is that the higher quality options seem to produce smaller files than the lower quality option.

It’s also difficult to determine just what quality or bit depth was rendered. Files rendered from AE or Premiere at Quality 4 are shown as Quality 5 in Premiere Pro Properties. Unlike ProRes, codec details do not appear in QuickTime Player or supporting apps. Though Premiere has more information on file properties, there’s no tag for bit depth. You can tell the difference between the 2 codec flavors inside of After Effects though: 10-bpc YUV flavor is reported as “Millions” while the RGBA choices both show as “Trillions of Colors+”.

In any case, the renders look good, and Adobe will no doubt provide more details and features in time. 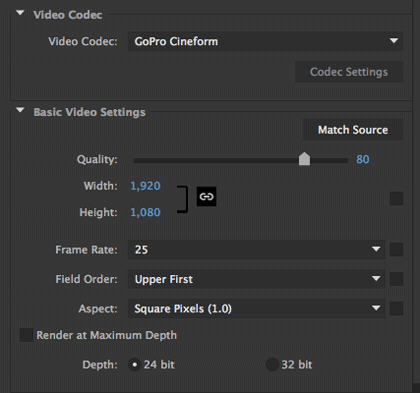 BTW, Mac users have a newish option with ProRes 4444 XQ in Creative Cloud. It’s the highest-quality version of ProRes, and you can manually enable it for use in Adobe video apps.

Here’s a few more notes and links on GoPro Cineform: