Over the course of 12 years, Drew Geraci’s has gone from being a photographer’s mate on a U.S. Navy aircraft carrier to a sought-after time-lapse photographer and videographer. After leaving the U.S. Navy, Geraci worked as a multimedia producer for the Washington Times before his amazing time-lapse photography was discovered by Academy Award nominated director David Fincher. A year later, Geraci’s work was being featured in the opening sequence of the award-winning Netflix series House of Cards, which led to jobs from big name clients including PBS, Corona, ESPN, and the National Football League. Along with fellow Navy alumnus Arthur Breese, Geraci founded District 7 Media, a fast-growing video production company that specializes in time-lapse photography. 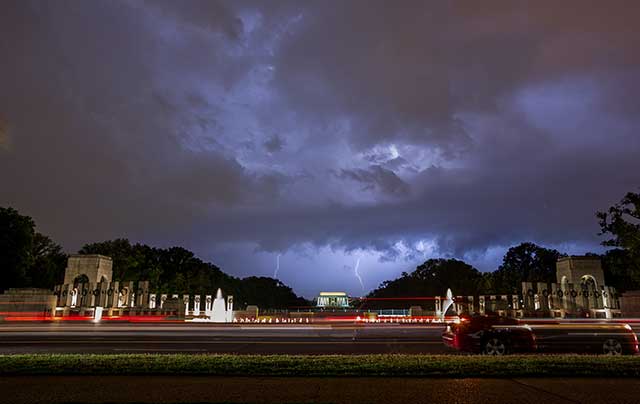 Adobe: How did you get started as a photographer and videographer?
Geraci: I really fell in love with photography during high school. After I graduated, I figured I could go straight to college or join the military. I joined the U.S. Navy as a photographer’s mate, and it was the best choice I could have made. I spent nearly five years on an aircraft carrier before attending Syracuse University for broadcast journalism. 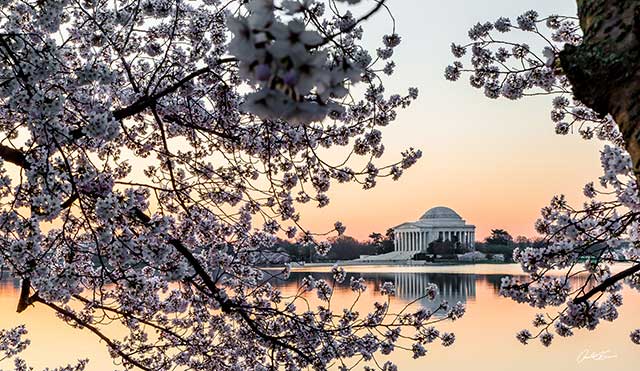 I finished out my enlistment producing and disseminating video for the military—first from a little island in the Indian Ocean, and then from Defense Media Activity in Washington, D.C. My time in the Navy really helped me grow as a storyteller. I started out as a photographer, but I learned to work with video, audio, and motion graphics—whatever I needed to tell my story. 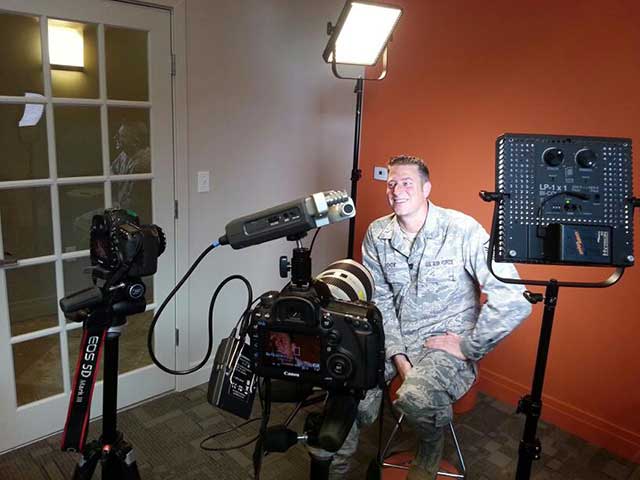 Adobe: What did you do after you left the Navy?
Geraci: After I left the military, I stayed in D.C. to work for the Washington Times, where I was able to tell stories that I wanted to tell, the way I wanted to tell them with different types of media. During that time, I never stopped working on my own projects. One particular video was an experiment I shot around D.C. that combined time-lapse photography with high-dynamic-range imagery. I threw the video up on Vimeo and it got more than 50,000 hits, so I was pretty happy. 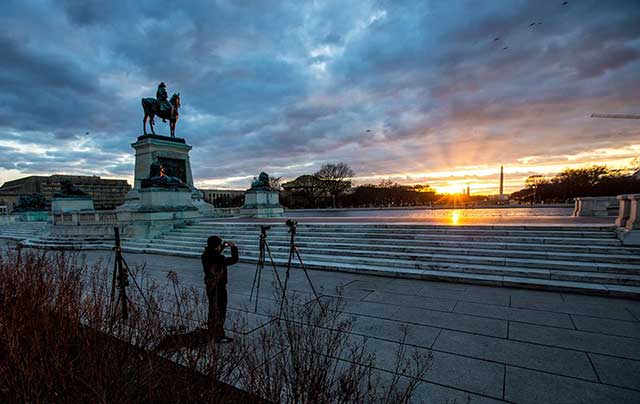 Adobe: What led you to pursue time-lapse work full time?
Geraci: A few months after I posted the video, I got a call from Netflix. The next thing I knew, I was having lunch with David Fincher at Union Station. He told me that he was working on a new project and he wanted me to do some time-lapse photography of the “dark and gritty” side of D.C. He didn’t tell me anything about the show but of course I said yes—it’s David Fincher!

I hired an assistant and for the next eight months we went out shooting time-lapse content and then handed it off to a production house. I found out three months later that the footage was being used for the opening sequence of House of Cards.

Adobe: How did House of Cards change things?
Geraci: Everything exploded. Suddenly I was getting calls from all over: Corona, Coach, PBS’s Frontline, Discovery Channel, and even the NFL. I started my own company, District 7 Media, and we’re growing every day. We still specialize in time-lapse photography, but we do full video production as well. It’s amazing how much things have changed, and it all started from one little video.

That’s the power of social media, really. It’s so important for artists to get their work out there. It doesn’t matter if a million people are watching or just a few hundred. All that matters is that the one right person sees it.

Adobe: What is the process for your time-lapse photography?
Geraci: Depending on the scope, we may shoot up to 4,000 images per day for a project. The first step is color and exposure correction in Lightroom. The ability to save and apply the same settings to all the images using Lightroom is a lifesaver. It really helps us streamline processes while ensuring consistent metadata, exposure, and color temperature for the final video. 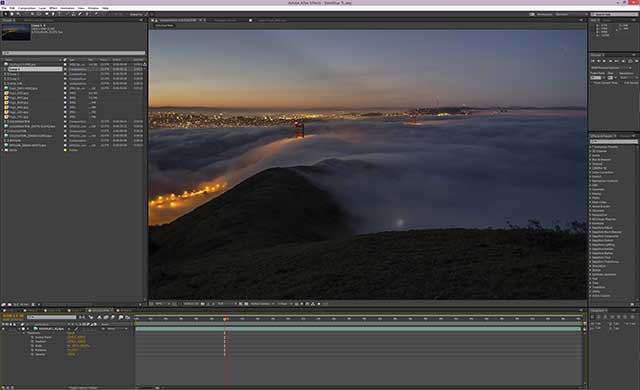 We export all the frames into After Effects, which is where we composite all the images and adjust the speed and movement to get the final take. Sometimes, we use Dynamic Link with Premiere Pro to create proxies and streamline the editing process even further. The integration between apps within Creative Cloud is really key for us, since it allows us to switch between programs without losing quality and work much more efficiently.

Adobe: Have you always worked with Adobe products?
Geraci: I started out with Adobe Photoshop back in high school. During my time in the Navy, I became familiar with all of the other Adobe creative software as well. Adobe Creative Suite really blew me away. Animation always sounded so difficult, but After Effects made it seem so easy. Premiere Pro also ignited my passion for video. Manipulating clips on the timeline is incredibly simple, but the features are much more versatile and robust compared to other software that I’ve worked with. 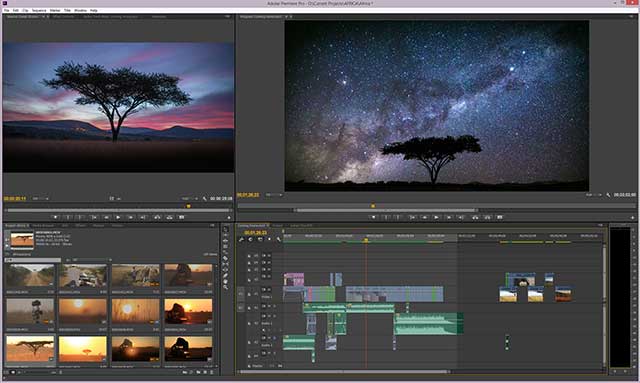 At District 7 Media, we mainly use Lightroom and After Effects for our time-lapse photography, but we also work with Premiere Pro, Photoshop, Illustrator, Dreamweaver, SpeedGrade, and Bridge. The ability to easily migrate data between systems through Adobe Creative Cloud makes sharing files and collaborating on projects a snap. With Creative Cloud the software is more integrated than ever, so we can get the most out of the functionality.

Adobe: What are some of the other projects you’ve worked on with District 7 Media?
Geraci: We did an amazing project with Corona called “Luna Corona,” which just won a Golden Lion at the 2014 Cannes Lions. Corona set up a billboard in Manhattan, and if you got the perfect angle, the moon dipped into the bottle like a wedge of lime. We had to work with mathematicians and astronomers to get it the angles just right. That project involved the time-lapse photography plus documentation, which Corona used as an advertisement. Another company bid for the job, but since we’re able to operate so efficiently, we were able to produce a higher quality project for less.

We’re also very involved with the NFL. We produce the time-lapse content for the Super Bowl XLVII and Super Bowl XLVIII videos. The Super Bowl in New Orleans was particularly memorable. The video combined time-lapse and high-speed photography to really tell the story of the city and get the audience pumped for the upcoming game.

Adobe: Did your experiences in the military shape your creative experiences?
Geraci: One of the great things you learn in the military is leadership—how to take control of new situations. Not only did it really prepare me to set up my own business, but it helped me learn how to express myself and give my stories clear direction. 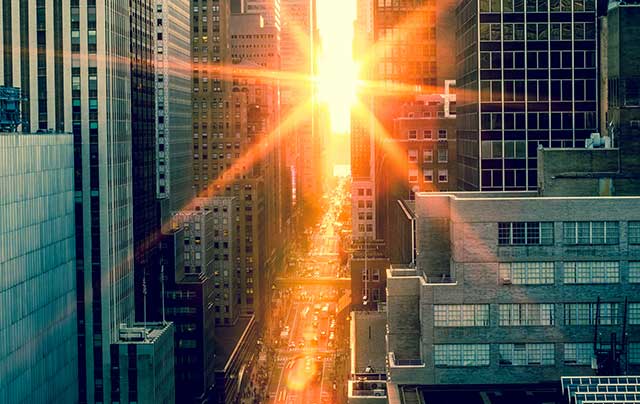 Adobe: Where do you see your business going in the future?
Geraci: We’ve started expanding into stock footage. We’ll be producing and providing incredibly unique content that people won’t be able to find at any other agency, including time-lapse and high-speed photography. We’re also looking to get more into feature film and documentary storytelling. Time-lapse may be our specialty, but we’re all excited to keep growing and opening ourselves to new challenges.