What The HDSLR Speculators Are Saying 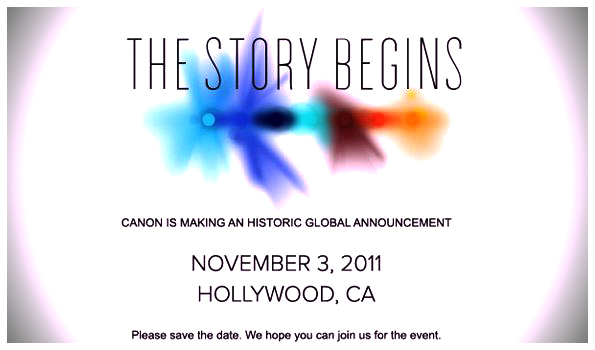 According to the invitation originally circulated by Engadget.com, Canon will be making “An Historic Global Announcement” November 3rd in Hollywood.  The event is rumored to be held at Paramount Studios, but this is unconfirmed. Speculations from the world of HDSLR seem to vary. Here are some quotes from the who’s who of the HDSLR filmmaking world.

Cinema5D: “I’d love to see that something that the recent Sonys should have been.”

CanonRumors: “I would say this event is NOT for an EOS or Mirrorless camera system, the city it’s being held in should be a giveaway.”

Philip Bloom: “My biggest worry is actually this is not a product announcement at all, not even a whizz bang printer.”

WideOpenCamera: “This is a Professional Video Camera not a DSLR.”

NinoFilm: “A camcorder priced around $15K.”

Cheesycam: “An upgrade like the Canon 5D Mark III, I doubt we’ll hear anything about that this early…”

Pocket-lint: “It could be a new DSLR sporting the new DIGIC 5 processor sneakily announced in the Canon S100.”

I hate to speculate about these things. Many times these global announcements are actually unannoucements, meaning they don’t have anything to say.  It’s merely a stunt to maintain market position until they do.

Having said that, as details become available, look for info on confirmed guests attending.  If any of the Canon Explorers of Light who are also cinematographers (including Shane Hurlbut, ASC,  Rodney Charters, ASC, Gale Tattersall or Vincent Laforet) are on the guest list, you can bet it will be an EOS announcement.

If Canon is going to the expense of renting out Paramount Studios during the height of the television season for an EOS related announcement, they will definetly want their Explorers of Light in attendance. If none of the Explorers of Light are on the guest list, it’s most likely a camera to compete with the Alexa, Epic and F3.

Of course, that’s just my opinion, and I may be wrong.