Get a sneak peak before the big screen premiere at CineGear 2012! 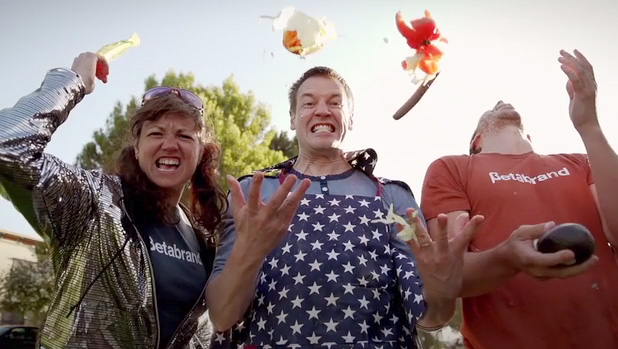 Adam Wilt and I will host a presentation on the new Sony FS700 at CineGear 2012. This video, a promo for clothing brand Betabrand, is the centerpiece. Get a sneak peek now, and get all the juicy camera details on Saturday, June 2nd, on the Paramount lot in Hollywood.

A version of this promo went live earlier this week on Betabrand’s Youtube channel. They wanted to include a link in their monthly newsletter, and at the time we hadn’t done the final grade. Now, though, I’m happy to present the piece in its final form:

Ian did a PHENOMENAL job of creating order out of chaos… which, if you think of it, is exactly what directors do. I call him the master of music and rhythm: he always picks the right score and does amazing things with it.

Before we go any further, I want to point out that the look of the video was largely created in post. The crushed blacks and the Kodachrome feel was created in Apple Color. The reality is that the camera sees a lot more shadow detail than what you see here. A LOT more. We’ll show that at our presentation on Saturday.

If you missed the original behind-the-scenes article you can read it here.

It took a few hours to get this look right. Part of the issue was that I did the grade myself, and I’m not a professional colorist. I know enough to be somewhat dangerous, but I’m not as fast, efficient and clever as someone who does nothing but grade things for a living. Still, I was within the production budget (“free”) so I took on the task with the help of Adam Wilt and director Ian McCamey. Adam set us up in his office at Meets the Eye Studios in San Carlos, California, where I graded the project on his 12-core Mac Pro with color accurate HP DreamColor displays. He and Ian watched on a large screen LCD that Adam had tuned up for the occasion. Ian brought examples of five looks that he’d mocked up at home and we quickly agreed on a ’70s feel, with warm sunlight and crushed blacks. (Was this decision driven by the disco pants in the opening shot? We may never know.)

We picked this shot as our hero shot: 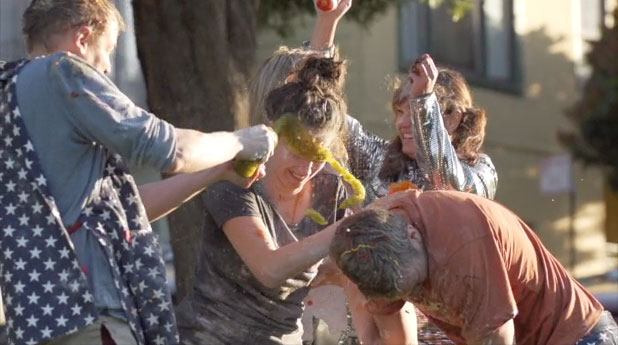 We then created a look and tried to match everything else to it: 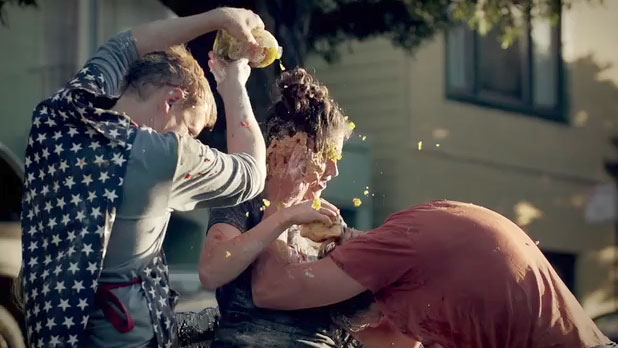 The first thing we did was crush the blacks. Adam set the black gamma as high as possible for our shoot in order to preserve shadow detail, but Ian and I wanted a crunchier look so we threw a lot of that away. That doesn’t mean we didn’t need that detail in the first place; grading is an inherently destructive process and it’s always better to have more information than less. Throwing away data is easy, but you can’t add what’s not there.

We added a fair number of vignettes to direct the viewer’s eye. It’s always nice to frame and light shots so that happens naturally but when you have a crew of three, virtually no grip gear, no lighting gear, and four hours to shoot a half dozen people throwing food at each other in cool ways, you tend to capture footage first and tweak later.

I was pleasantly surprised at how far I was able to push this footage, given that it’s recorded to 8-bit AVCHD. There are a couple of shots whose shadow detail I boosted by about a stop and the noise didn’t increase dramatically. It was quite easy to push highlights up and pull the blacks down without creating banding in the sky. There are a couple of areas where the camera shows some weaknesses–moire at high speeds can be an issue–and Adam will go over that during his presentation at CineGear.

Overall I’m very pleased with the Sony FS700. I learned that I’m not used to working off a built-in camera monitor (I usually have some sort of quality picture monitor nearby, with at least a built-in waveform display) and as a result I had a shot or too that were either too bright or too dark, but I was able to fix those acceptably in Apple Color. I also learned that, while this camera makes amazing images, it’s very important to get them as close as possible to the finished look in the camera–not because of noise, but because of compression artifacts. I’d say this camera’s biggest weakness is that it records to AVCHD, which is not my favorite codec. I’d prefer less compression, 10-bit color and a higher bit rate.

Still, when you consider the dynamic range (up to five stops over 18% gray!), the color (very cinematic), and the ability to record 240fps in full-res HD… I think it’s safe to say that this ~US$8,000 camera delivers. I think it’s also safe to say that when Sony sees how popular this camera is they’ll come out with a pro version that fixes a lot of these issues and costs a bit more. No, I don’t have any inside information–I just think that’s the next logical step. Affordable high-speed HD is currently the holy grail of visual effects filmmaking, and if this camera gives us 240fps for $8K then think what a $20K camera could do!

For those of you who get sweaty and light-headed at the thought of paying $20,000 for a camera, let me remind you that ten years ago it cost $60K just to buy a Sony F900 body. If you’ve never shot with an F900 I can assure you that it was great for its time, but shooting with one again is what gives me sweaty palms and nightmares. Two stops of overexposure latitude… that’s what keeps me up at night.

Five years before that a digital Betacam cost $70K, and you really don’t want to see what kind of picture that makes. It was brilliant when it came out, but an acceptable-looking interlaced SD video from the mid-90s, no matter how well shot, generally looks awful compared to what we expect today.

When I transitioned from film to video it was possible to buy a Betacam, pay off the loan in a year, and spend another nine years just making money off it. Those days are LONG gone.

Come see more at CineGear 2012, on the Paramount lot in Hollywood, Saturday, June 2nd. Adam and I are scheduled to go on at 2:45pm in the Sherry Lansing Theater. We’ll be showing Betabrand as well as Pacific and Fire and Ice. Adam has lot of resolution and high speed tests to show, and I’ve got a batch of dynamic range charts that illustrate what the FS700’s gamma curves do. It should be a very interesting hour. (And for those of you who can’t make it, I’m sure most of that information will eventually make its way to PVC.)

Art Adams is a DP who thinks in slow motion… and will eventually realize that saying such a thing is probably not the best marketing move ever. His website is at www.artadamsdp.com.