I never thought I’d have to worry about the technicalities of shooting high speed at night, but the FS700 has changed all that. There’s one very, very important trick to know before you take your new camera into the streets…

Adam Wilt and I presented a talk about the new Sony FS700 camera to an audience at CineGear 2012. As part of our preparation we ran around and shot a bunch of slow motion night footage… which is certainly something I’ve never been able to do before.

It’s been pointed out to me that my original article had things slightly wrong. I’ve since made some revisions. 6/9/12

The FS700 is similar to the Phantom in how it operates. When shooting slow motion the camera records first to a buffer, and when the buffer is full it lays the footage off to an SD card for storage. The reason for this is fairly simple: it’s impossible to cram 240fps footage onto an SD card fast enough. The throughput just isn’t there. The buffer is solid state memory, which is volatile but also very fast. It’s a perfect, albeit temporary, capture storage area.

When buffering is finished the camera writes the buffered data to the SD card at 60fps, the fastest write speed the card will support. It’s good that the data is laid off as fast as the camera can manage because that gets us up and shooting again as fast as possible. It’s also bad, but for a reason I never suspected.

Take a look at this Quicktime movie, assembled from one 240fps night shot:

Interesting, eh? Here’s what I think is happening:

U.S. power operates at 60hz (60 “cycles”), which means that there are sixty full cycles of alternating current every second. Each cycle causes discharge sources–lights with ballasts, which for a night exterior means fluorescent tubes as well as sodium and mercury vapor street and architectural lights–to pulse with light twice, for 120 light pulses per second. At 240 fps each frame isn’t getting a full pulse of light; rather, one frame gets most of the pulse plus some of the off period between the pulses, and the next frame gets most of the off period and some of the next pulse. (In theory it’s possible to capture a full pulse on one frame and a full off period on the next, but getting that timing right by accident is statistically unlikely.) Let’s actually call these two types of frames the “on” frame and the “off” frame.

I’ve been using the layoff period, at 60 fps, as a way to review takes, as I can see enough slow motion to get a sense of what I captured at the higher speed without taking the time to play back at the captured speed. At 240fps full playback of a take requires 80 seconds, while watching playback during the layoff to the card takes a quarter of that. It’s very tempting to look at the 60fps preview and say “Yup, I got the shot,” or “Nope, need to do it again.” But…

If there are any discharge sources in the frame this is a big mistake. At 24fps playback the flicker is visible, but at 60fps playback it is not. That seems to be because 60fps is slightly more than twice as fast as 24fps so the flicker is much less noticeable, and may be hidden by the on-board monitor’s latency. (I’ve yet to shoot slow motion with discharge sources and the FS700 with an external monitor.) You can’t see 24fps without toggling the camera into playback mode, which takes extra time–so the impulse to watch the layoff at 60fps and say “That’s good enough!” is pretty strong.

There is a way to fix this kind of flicker in post, as I’ve shown in the movie above. Speeding the footage up to 120fps results in the following cadence, where “(” and “)” denote the frames that are visible:

Speeding up to 60fps gives us this:

Either way we’re only seeing one side of the flicker at 60fps, which means the lights won’t flicker… which solves the flicker problem.

Slowing this footage to 60fps, or even to 120fps, solves the problem because now we’re only seeing the “on” frames and skipping the “off” frames, or vice versa. As long as we only see all “on” frames or all “off” frames there’s no flicker.

There’s one more interesting thing to notice. Look at these two adjacent frames: 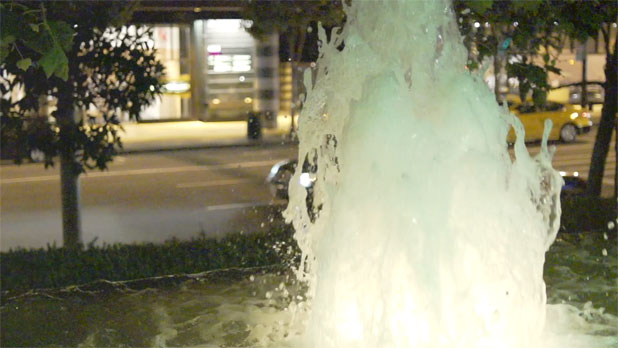 Background brighter, foreground leaf darker. I can see the shadow of a street light on the street. 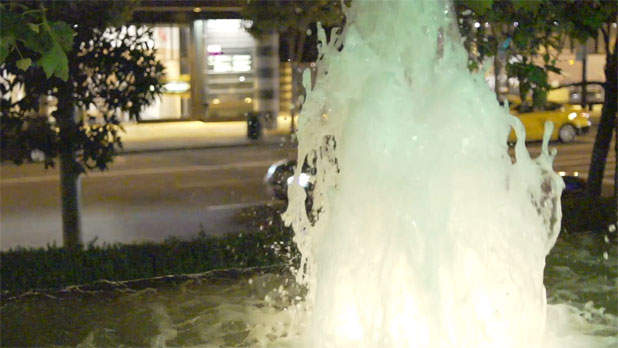 It looks like the far side of the street is on a different power phase than the near side, so it’s bright when the foreground is dark and vice versa.

The lesson here is that shooting slow motion at night is crazy cool BUT fraught with a little bit of danger. It’s important to shoot a test at your final framerate and then watch it back on set, on a decent-sized monitor, to make sure you know what you’re getting. If you’re shooting at 240fps, watch playback at 24fps, or full slow motion, and not just 60fps during the layoff process. The camera can do all this, it just takes time to toggle into playback mode and watch the entire clip. With a director leaning over your shoulder asking “Can we go yet?” that time can seem like an eternity–but it takes more time, and more money, to come back and get the shot again.

There are lots of sources that flicker at night: street lights, office building architectural and interior lights, traffic lights, brake lights, etc. You won’t know which ones are problematic until you get there and shoot a test. 60fps should always be safe, and 120fps can be safe (although some lights, like LED traffic lights and exit signs, sometimes refresh at strange intervals that may not line up with 60hz), but 240fps will almost always be a step too far. Make sure you’re good with what you see on a test clip before rolling on the real thing, and shoot a test at 120fps as well just to make sure that you can save the shot–if you have to–by dropping every other frame in post.

Do your homework before the shoot, or allot time during the shoot, and make sure you know what you’re getting by watching playback at the frame rate that you’re shooting. Don’t assume that what you see during the camera’s layoff period is an accurate preview, because it isn’t.

For more info about flicker-free shooting take a look at this article.

For more about the FS700, check out Adam Wilt’s CineGear presentation. Mine will appear within the next few days.

Art Adams is a director of photography who hates technical surprises. His website is at www.artadamsdp.com.