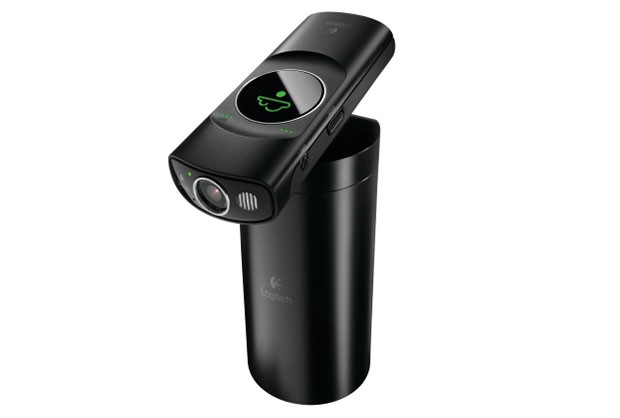 Logitech has just announced its Broadcaster Wi-Fi Webcam, the first Logitech product marketed specifically for video professionals. Although not specifically marketed towards professional producers, for quite some time the Logitech C910 with 720p HD has been used as a recommended remote host/guest camera for Mac-based remote hosts/guests (C920 for Windows-based ones), and each of those sold for under US$100 and connected via USB. Now the under US$200 Broadcaster Wi-Fi Webcam is cordless, features an external microphone input + built-in pan/tilt, internal mono mic, illumination lamp, and H.264 encoder. More details ahead in this article.

Exclusively for Mac and iOS devices

At least for now, Broadcaster Wi-Fi Webcam works exclusively for Mac (10.7 Lion or later) and iOS (iPad/iPhone) devices using iOS version 5 or later. Although not specifically indicated by Logitech, it will likely work with the latest generation iPod Touches too. iPhone 3Gs or earlier are not supported.

Broadcaster Wi-Fi Webcam has a 3x digital zoom and digital pan and tilt. I hope to evaluate the quality of these in an upcoming review.

Logitech has stated that recordings will be editable with Final Cut Pro X or iMovie. Although Logitech has not published the exact file format, we do know that the Broadcaster Wi-Fi Webcam has an inboard H.264 encoder, so it will likely be either a .mov or .mp4 file. Given the WiFi requirements (see ahead), the bit rate is likely to be around 2 megabits per second for a 720p file. Although not stated by Logitech, this file will likely be editable directly with Premiere Pro CS6 and with Avid, in addition to Final Cut Pro X and iMovie.

Logitech has specified that Broadcaster Wi-Fi Webcam is compatible with 802.11 g and n. So far, Logitech has not specified whether it is dual band (2.4/5 gHz) but I really hope it is. When I get an answer, I’ll update this or include the info in an upcoming article or review. Logitech specifies a range of up to 50 feet (15.24 meters) from the wireless router. For 720p webcasting, Logitech specifies a minimum of 2 megabits per second upload.

Battery powered for 100% cordless use

You charge the Broadcaster Wi-Fi Webcam via an included USB charger. Logitech estimates a 2-hour run time. However, this can vary depending upon how much you use the internal lamp.

Apparently Logitech has a loose partnership with Ustream, since it emphasized that service. However, Logitech also states that using their required but free Broadcaster App (www.logitech.com/broadcasterapp) as a front end, it will appear as a camera source with most Mac applications, and they specify Facetime, iChat, and Skype as being compatible. So presumably you could use any CDN from a Mac.

At least for now, Ustream seems to be the exclusive CDN from iOS. Blink your eyes and that could change.