The Stanford prison experiment is one of the most famous psychological experiments of modern times, playing a significant influence in academic and popular culture. Filmmaker Kyle Patrick Alvarez, known for his work directing Easier with Practice and C.O.G., brings the experiment to theater audiences in the upcoming feature film The Stanford Prison Experiment. With a strong ensemble cast including Billy Cruddup, Ezra Miller, and Olivia Thirlby, The Stanford Prison Experiment is slated to compete in the 2015 Sundance Film Festival U.S. Dramatic Competition. 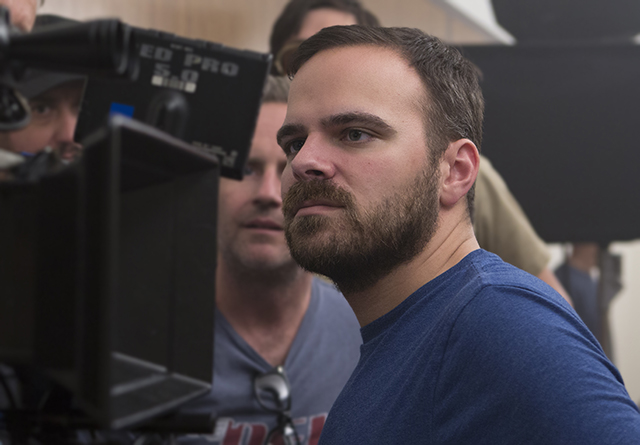 Adobe: Tell us about The Stanford Prison Experiment.
Alvarez: The Stanford Prison Experiment is based on the actual events from 1971. A team of researchers, led by Stanford professor Dr. Philip Zimbardo, selected 18 students to participate in the roles of prisoners and guards in a mock prison simulation. The controversial results made this one of the most well-known social experiments of all time.

Adobe: What were some of the biggest challenges you had making this film?
Alvarez: The biggest challenge had to be the shooting schedule. We shot 130 pages in 21 days, and almost every scene had at least a dozen people in it. It was an absolutely brutal pace, but I was lucky to be working with a great cast of young guys. They were so fun, but also very committed and professional. They could joke around and then immediately snap back into an emotional scene. It made it easy to get through a tough day.

Another challenge was trying to get around the insular feel of the movie. Most of the scenes take place in one hallway, so we had to be creative in how we shot it to make it feel bigger. We didn’t have a lot of time while filming or while editing, so the entire process was really intense. We definitely didn’t have room for a lot of time to sit around and wait for things to get done.

Adobe: Why did you use Adobe Premiere Pro CC?
Alvarez: In my first feature film, Easier with Practice, I shot the movie on RED cameras but discovered that waiting for shots to transcode for Final Cut Pro really weighed down shooting. For my second feature film, C.O.G., I decided to work with Adobe Creative Cloud. I had heard that I could use native RED R3D files in Adobe Premiere Pro without transcoding. The difference was night and day. We cut expenses and saved so much time editing. Adobe Creative Cloud and Premiere Pro are definitely the way to go for independent filmmakers like myself due to ease-of-use and affordability.

Adobe: Now that you’re familiar with Adobe Premiere Pro, are you doing anything differently?
Alvarez: I’ve definitely embraced some of the latitude that I get working with the raw footage in Premiere Pro. We shot the film in 5K and finished it in 2K, so that gives us a lot more space to play with. Don’t get me wrong, I try to do as much in camera as possible. But being able to play with the images gives us so many more options.

For example, if I’m thinking about zooming in for a dramatic shot but I’m not positive it will work until I see it, I can shoot it wide on set and play with the exact framing in Premiere Pro. I’m not locked into shots and really get the freedom to explore scenes creatively.

In one or two cases, I needed to fix some coverage and had to zoom in about 250%, but Premiere Pro handled everything incredibly well. I could render everything in full resolution with really smooth exports.

Adobe: What were some benefits of Adobe Premiere Pro for this film in particular?
Alvarez: I’m a firm believer that actors should have microphones on them at all times, even if they’re not central to the current scene. It really keeps everyone on their toes and helps them focus their performances. Since a large part of the film involves the same actors in an enclosed space, we had up to 25 actors on mic.

We muted most of the mics in the final edit, of course, but we still kept all of the mic tracks on the timeline. When you added in multiple cuts, camera moves, visual effects, and additional audio tracks, we ended up dealing with a massively complex timeline. Premiere Pro somehow kept everything organized and running fast. It was exciting to push the software and use it to its full strength.

Adobe: How are impressions of Premiere Pro different today than a few years ago?
Alvarez: There’s been such a change in terms of how Premiere Pro CC is perceived between when I cut C.O.G. on Premiere Pro in 2012 and today. People would say, “You used Adobe? How does Creative Cloud work?” They weren’t sure about the software or the membership model, but Adobe has done a great job educating people and now the vibe is totally different. I encounter more people who have tried Premiere Pro or who have heard good things and are thinking about switching. It’s exciting to see that change. It was alien to cut on Premiere Pro two years ago, but today it’s fairly commonplace.

Adobe: What’s next for The Stanford Prison Experiment?
Alvarez: We’ve been accepted to the Sundance Film Festival, which is incredibly exciting. We’ve got a great ensemble cast dealing with a famous subject finally brought to film, so we’re hoping that people will be able to see the movie on screens near them before long.