Blu-ray drives offered from MCE just no playback in OSX 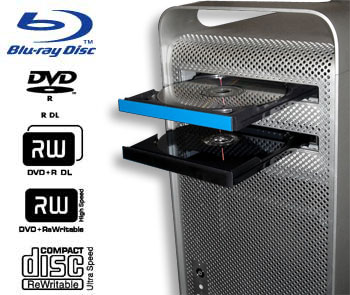 So we all know by now that Steve Jobs called Blu-ray a “bag of hurt” and that Apple doesn’t officially support Blu-ray on the Macintosh. Yes we can author in Adobe Encore and burn with Toast. You can even back-up data galore onto Blu-ray data discs and mount those in the Finder but if you want to watch a Blu-ray movie then you got to look elsewhere because Macintosh doesn’t support that. One option for the Mac is a Blu-ray drive from MCE. If you’ve got a Mac Pro or a G5 tower then you’ve probably got a second optical bay just waiting for something to be shoved into it!

They claim the “fastest, most versatile Blu-ray drives available for the Mac.” Things like:

I put an asterisk by the “Play Blu-ray movies on your Mac” since that requires “Boot Camp running Windows XP or Vista.” According to MCE:

As of now, playback of Blu-ray movies is not yet available under Mac OS X. There is simply no software yet that will do that. This situation will likely change very quickly. You can, however, with the software provided, playback commercial Blu-ray movies on your Mac Pro with Apple’s Boot Camp running Windows XP or Vista. You will need to make sure to download the latest graphics drivers from either Nvidia or ATI, depending on your graphics card, in order to ensure smooth playback of high definition Blu-ray movies as you’ve never seen them before on your Mac.

And price aren’t too bad. They range from a starting price of $399 for a 6x internal drive to $529 for an 8x external (USB 2.0 or eSata). Of course blank DVD media cost is still expensive: 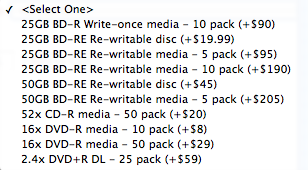 That’s $9 for blank 25 gigs discs. But the thought of backing up 50,000 photos from Lightroom on to a single piece of optical media is nice!

But rebooting into Windows is a lot of work to go through just to get playback of a Blu-ray disc. More than that it shows the sad state of Blu-ray support on the Macintosh in general. The thought that you can’t easily author a simple Blu-ray DVD for a corporate client and check right on your machine after burning is a huge incentive not to offer the service at all! Of course you always check your burned DVDs in a desktop player but I will always mount a finished DVD for playback on my machine first. There’s no way I’d waste time to reboot to Windows to check a Blu-ray disc so it’s a lot less likely that that will be offered. It may also be a comment on the state of Blu-ray in general. With prices for players and discs still high and Netflix charging even more for renting Blu-ray discs their days may be numbered. But until I can easily download movies that look just as good with all the extras and supplements I’ll still enjoy what Blu-ray has to offer. I just wish the powers-that-be who pull the Blu-ray strings would get their heads out of their asses and see that even though they won the format war, Blu-ray has a long way to go before it gets total acceptance.