Was Grant Petty channeling Rodney Dangerfield when he discussed how we should better respect classic analog NTSC/PAL interlaced footage?

Yesterday I watched Blackmagic Design’s live broadcast, which included many new exciting products. As has been customary for many years, the presenter was Grant Petty, Blackmagic Design’s CEO. I’ll likely cover some of those new products in upcoming articles or reviews. However, one of Grant’s compelling message actually made me think that he may have been channelling the now deceased US-American comedian Rodney Dangerfield (born Jacob Rodney Cohen; November 22, 1921 – October 5, 2004), whose tagline was “No respect!”. This portion of Grant’s message was all about how we should properly handle classic, standard-definition analog NTSC/PAL interlaced footage when digitizing it. You may recall that NTSC had a field rate of ≈59.94 fields per second (since 1953) while PAL had exactly 50 fields per second. Those ≈59.94 NTSC fields were “knitted” together to become ≈29.97 frames per second, while those 50 PAL fields per second were “knitted” together to become 25 frames per second. (However, PAL had two advantages over NTSC: color purity and 100 additional lines of resolution.) In summary, interlaced video was (and is) a technique for doubling the perceived framerate of a video without consuming extra bandwidth. Most of our modern displays are progressive, without fields, so at some point we must de-interlace the original footage into progressive video. Grant (and others) have recently stated that we have been doing that de-interlacing the wrong way. Ahead I’ll cover that in more detail, and how it relates to Grant’s message.

We’ve been doing the de-interlacing wrong?

What’s wrong with that?

What should we be doing instead?

What is the best way to do the proper de-interlacing as stated above?

It depends: Although there is software and hardware on the market to do that (and I’ll probably be reviewing some of them in the near future), Grant says that this technology (to do it the ideal way) is still primitive. That’s why Grant recommends that we digitize our classic analog NTSC/PAL interlaced footage as such (maintaining true interlaced mode for now), so we can have access to all of its intended quality as the conversion technology improves in upcoming years. In fact, in the new HyperDeck recorders from Blackmagic Design, the true interlaced H.264 capability is a key feature to make the ideal conversion later to progressive, to avoid what Grant calls the “Apollo 11 effect”.

What do I read into that statement?

I interpret that to mean Blackmagic Design is likely working on either software or hardware to do a much better job to make the best possible conversion from 50 interlaced fields to 50 progressive frames… or from ≈59.94 interlaced fields to ≈59.94 progressive frames. Whether or not Blackmagic is also planning to establish research and development facilities on the Earth’s moon is beyond my current prediction.

What should we do in the meantime?

I have already seen conversions done (using free or inexpensive software) from NTSC footage from ≈59.94 fields per second to ≈59.94p and it looks remarkably better than the typical conversions from ≈59.94 fields per second to ≈29.97p. Please stand by for more articles and reviews about that. Below is information on how to subscribe to my free bulletins.

Some of the manufacturers listed above have contracted Tépper and/or TecnoTur LLC to carry out consulting and/or translations/localizations/transcreations. Many of the manufacturers listed above have sent Allan Tépper review units or NFR software for review, including Blackmagic Design. So far, none of the manufacturers listed above is/are sponsors of the TecnoTur, BeyondPodcasting, CapicúaFM or TuSaludSecreta programs, although they are welcome to do so, and some are, may be (or may have been) sponsors of ProVideo Coalition magazine. Some links to third parties listed in this article and/or on this web page may indirectly benefit TecnoTur LLC via affiliate programs. Allan Tépper’s opinions are his own. Allan Tépper is not liable for misuse or misunderstanding of information he shares. 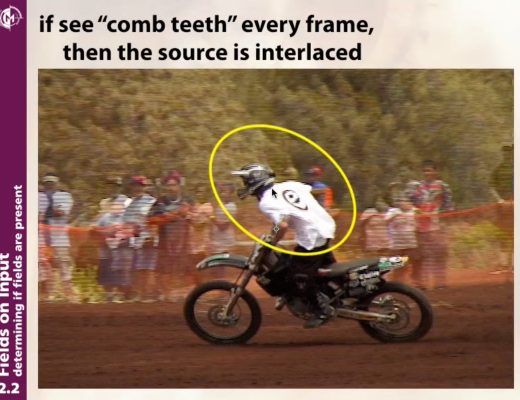 Some of our older video & motion graphics courses are being retired from the Lynda.com/LinkedIn Learning catalog. However, a...