Red, Blue, or Green. Sometimes just monitoring in a primary color helps a cameraperson nail the shot.  In the past year, Blackmagic has pushed consistently to developing their products for a live broadcast consumer. They updated their ATEM Switcher, Teranex converters and even released a Web Presenter. The URSA Studio Viewfinder is a relatively recent addition to the live broadcast catalog. Announced at the  National Association of Broadcasters in 2016 the viewfinder is really in the early stages of its life in a broadcast studio. Yet, there are plenty of useful features in the viewfinder I wish Blackmagic would place in their popular Video Assist and 4K Video Assist. By combining the just announced URSA Mini Pro and the URSA Studio Viewfinder a production will have a very adaptable kit. 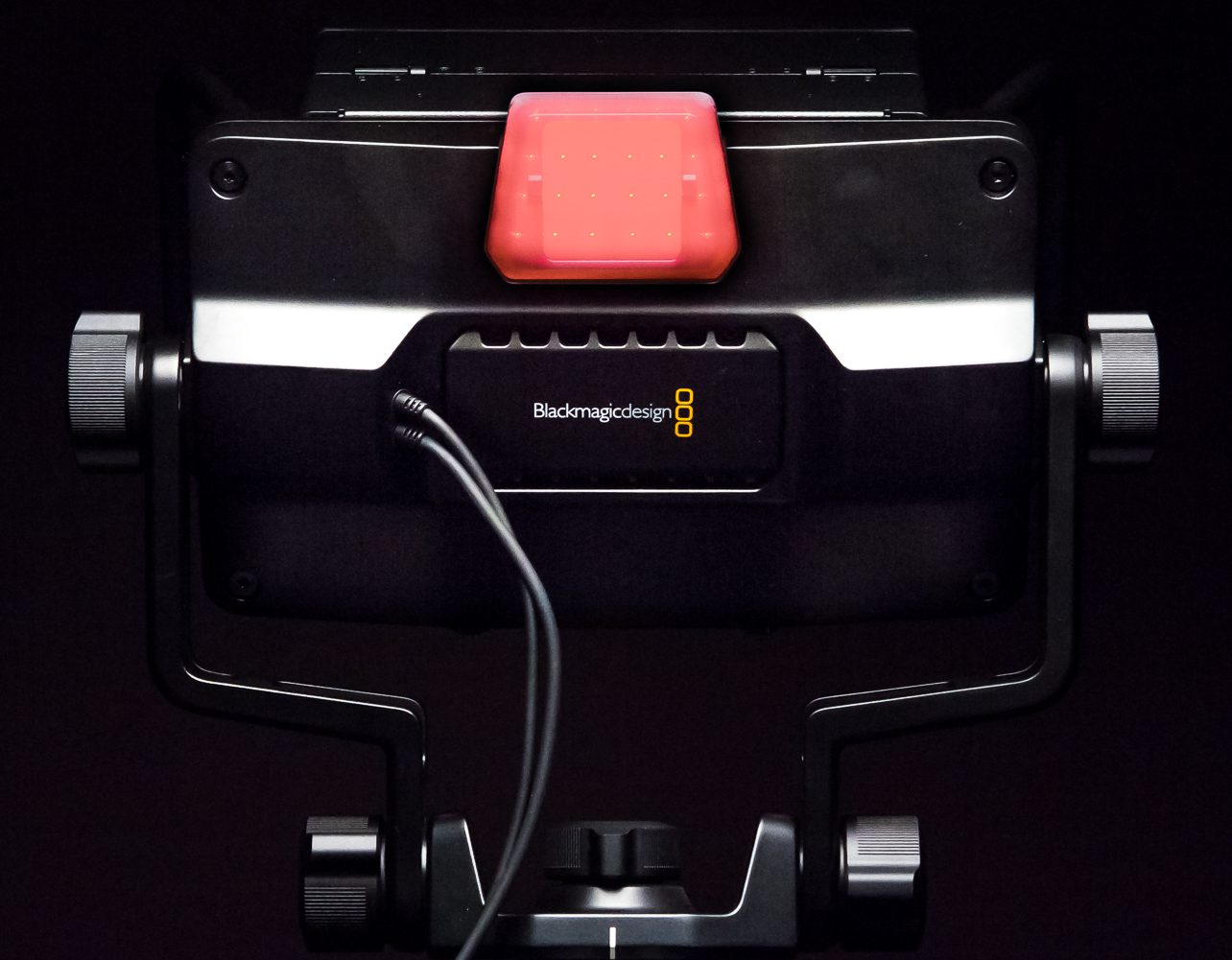 At first, I thought the URSA Studio Viewfinder might only be an inside the studio piece of gear. I thought the viewfinder would be like some the old studio viewfinders I encountered during my first job in television as a studio cameraman in Texas. In some ways, the URSA Studio Viewfinder pays homage to the old while moving the accessory forward and making the idea of a studio viewfinder much easier to use. Did it make shooting video a little easier absolutely and it should.

The three knobs on the right of the viewfinder access “Bright,” “Contrast,” and “Peaking.” Adjusting the knobs is, well, easy. The knobs have a sturdy feeling to them and hard stops on each end of their rotation. Compared to the 4K Video Assist I can say I like having knobs to adjust and feel the knobs may speed up the process of changing brightness, contrast or peaking than tapping into the features on a touch-screen like in the 4K Video Assist. Of course, I do not mean to diminish the 4K Video Assist. Sometimes swiping to access feature is exactly what is wanted when shooting. 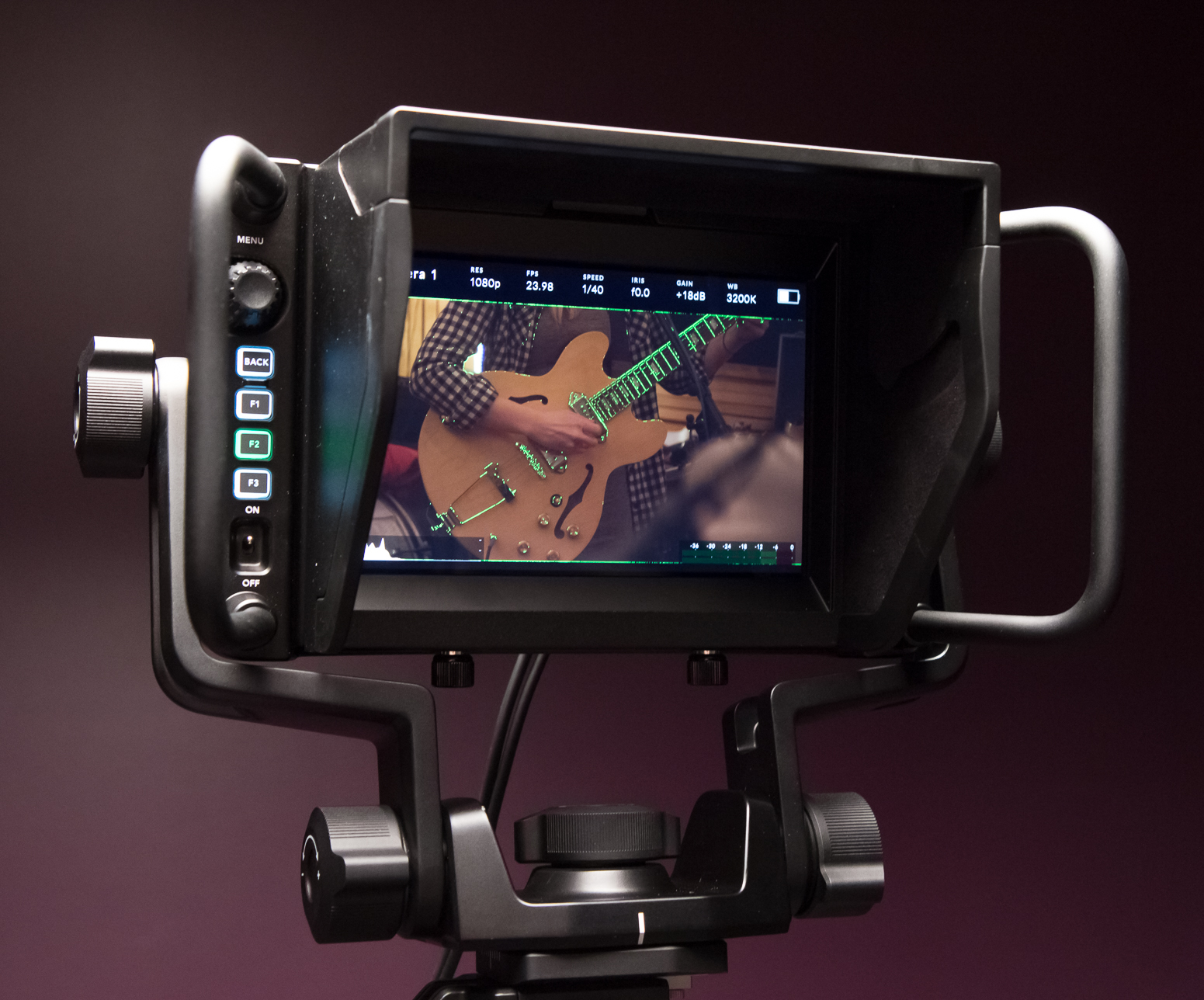 Found on the left side of the screen are four buttons and a menu knob. Three of those four buttons are customizable and can be used to display false color, zebra, focus assist, and customizable frame guides so framing for overlay graphics is easier for the operator. I bounced between these settings often. I finally settled on focus assist, false color, and zebra. If I was shooting a show or anything where graphics may be added later I’d probably use a little framing help. The framing guides for graphics are customizable and once a production has their set they can be mapped to any one of the three customizable buttons.

Dive into the menu and an operator will find more ways to customize the image. I found a couple of favorites I immediately took to using regularly. 1. Single color monitoring. If the focus was pulled on the fly I’d often time set my screen to a single color channel: Red, Green, or Blue. Then I’d set my edge focus assist to be the complimentary color. For example, I shot a bit with a red screen and green edge focus. This made pulling focus and operating the camera much easier. I felt very confident in my ability to follow a moving target with this setup. The other menu diving setting I used was the luminance histogram. I love using them on other cameras and monitors and since it is such a useful tool I glad to see it appear in Blackmagic’s URSA Studio Viewfinder. Blackmagic has placed these knobs and buttons show an operator has no need to remove their eyes from the monitor. 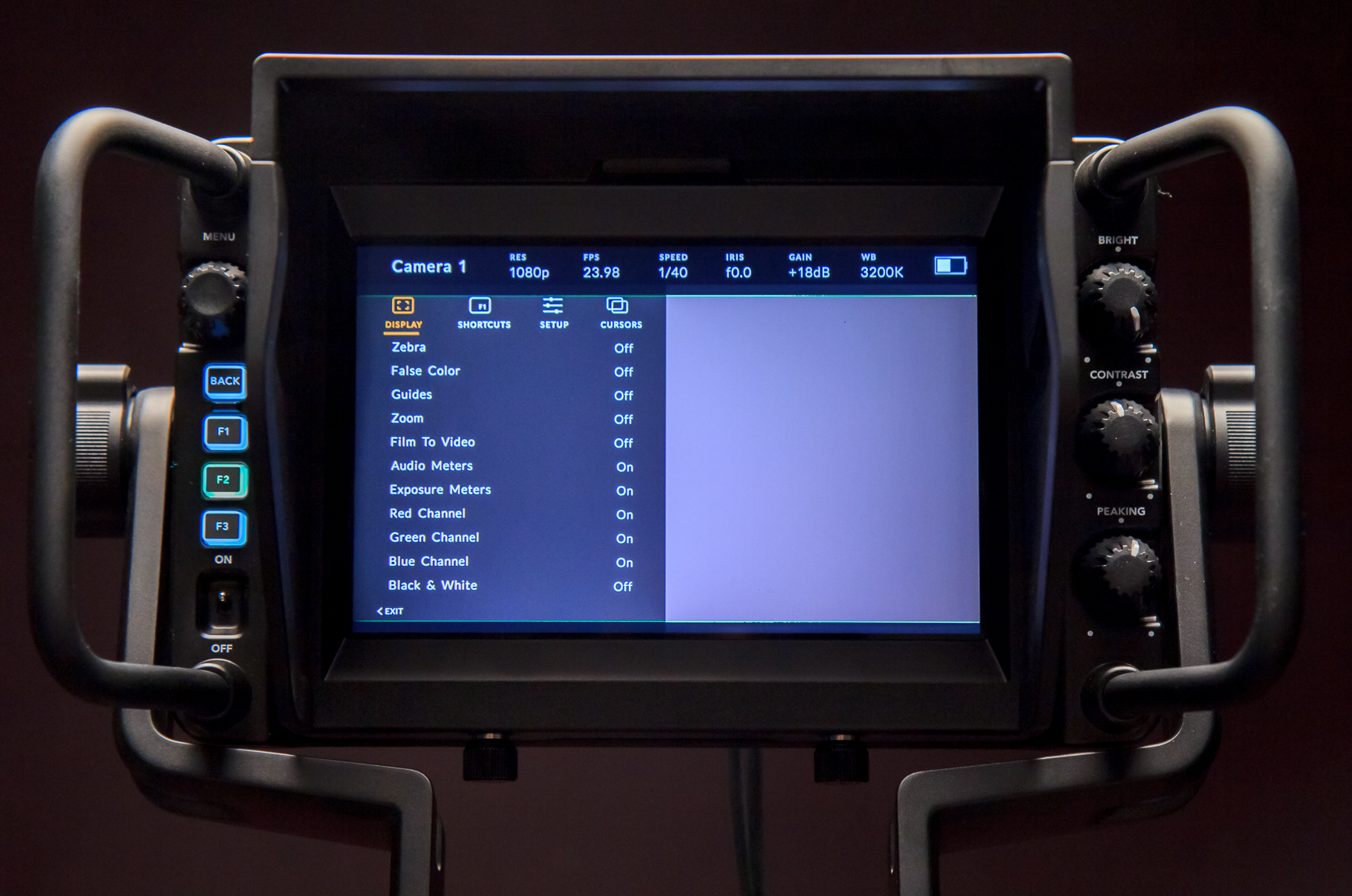 To attach the URSA Studio Viewfinder one simply torque screws the viewfinder to the top handle on the URSA Mini. It’s a good fit and the handle and viewfinder feel like one solid piece. Then Blackmagic placed hand grips along the left and right side of the monitor. These feel strong with zero play. I felt at ease gripping them and moving the monitor as needed. You will also find tilt knobs on the monitor as well as on the attachment piece closer to the camera. All of these feel strong and help a shooter find the best positioning needed to work comfortable.

With the right set-up there is every reason an URSA Mini and URSA Studio Viewfinder will work well in a studio. The screen is bright and the controls are easy to access. To me, this is one helluva live camera combo and a large format sensor paired with a great lens can give live shows a unique feel. There are plenty of features to help a studio cameraperson keep the subject in focus and all the features any other studio viewfinder may have to offer. To get the large sensor look will require the right lens. I think Fujinon and Canon both make lenses to work with the URSA Mini’s 12-pin power adapter on the front of the camera. Let me dive into hyperbole for a second, this combo may be close to an Alexa mini live tv combo if such a thing were possible. Alright, that’s enough hyperbole for now. 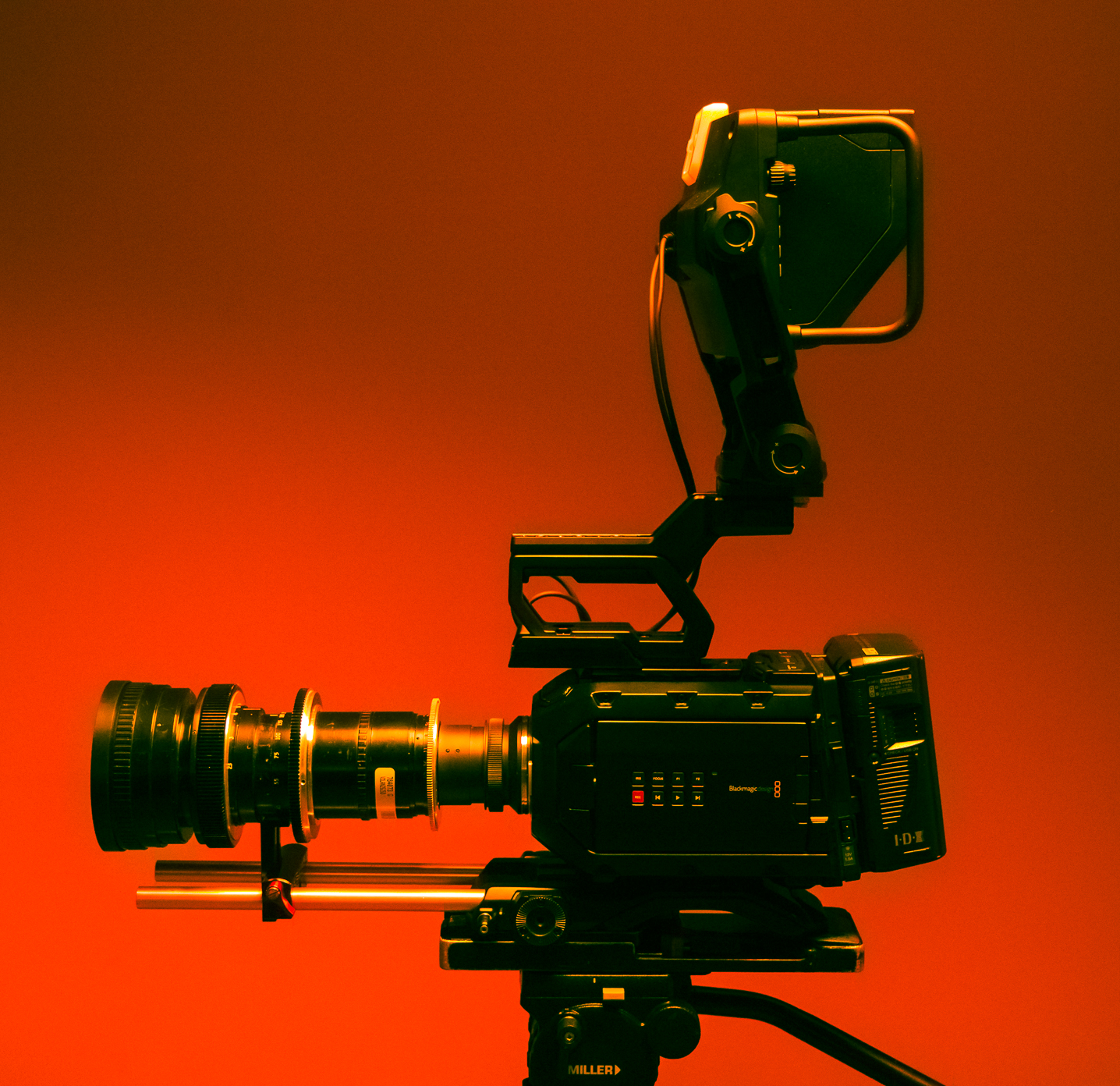 When I asked to review the URSA Studio Viewfinder Blackmagic wondered if I would try the viewfinder with the TV Station where I work. Here is the one big problem with this. All of the TV stations I know now use robotic cameras in their studio. Across the country TV stations are going robotic in the studio, hubbing master control, and potentially hubbing graphic departments. Not all of the TV stations, but a larger portion are moving in that direction. Who I see using the URSA Studio Viewfinder is not a TV News Station. I see websites like “Tested” and online video creators like “Rated Red” make great use out of the URSA Mini / Studio Viewfinder combo. Those hungrier upstarts may be more interested in achieving a different look in the video than established tv stations where an older generation still holds the controls. Plus, a website like “Tested” can shoot in their studio and out in the field with the same camera whereas a TV station is going to have dedicated cameras for their studio and dedicated field cameras.

For less than two thousand dollars this is a good buy. If you shoot a lot of TV productions and use the Blackmagic URSA Mini, or even the URSA Mini Pro then this is the Studio Viewfinder for you. Yep, I’m capt obvious with my last statement. The key will be finding the right lens and lens controllers so you can operate from the rear of the camera. I think the Fujinon 19-90mm, 20-120mm, and Canon 17-120mm may be excellent choices for lenses for a live tv camera kit for the URSA Mini and the URSA Studio Viewfinder. Either way, finding the best way to shoot a more like a traditional tv production will help you stay comfortable and able to shoot for long periods of time. Personally, I would love to see some of the features found in the URSA Studio Viewfinder into the Video Assist and 4K Video Assist. Features like isolating color channels and a removable sunshade. 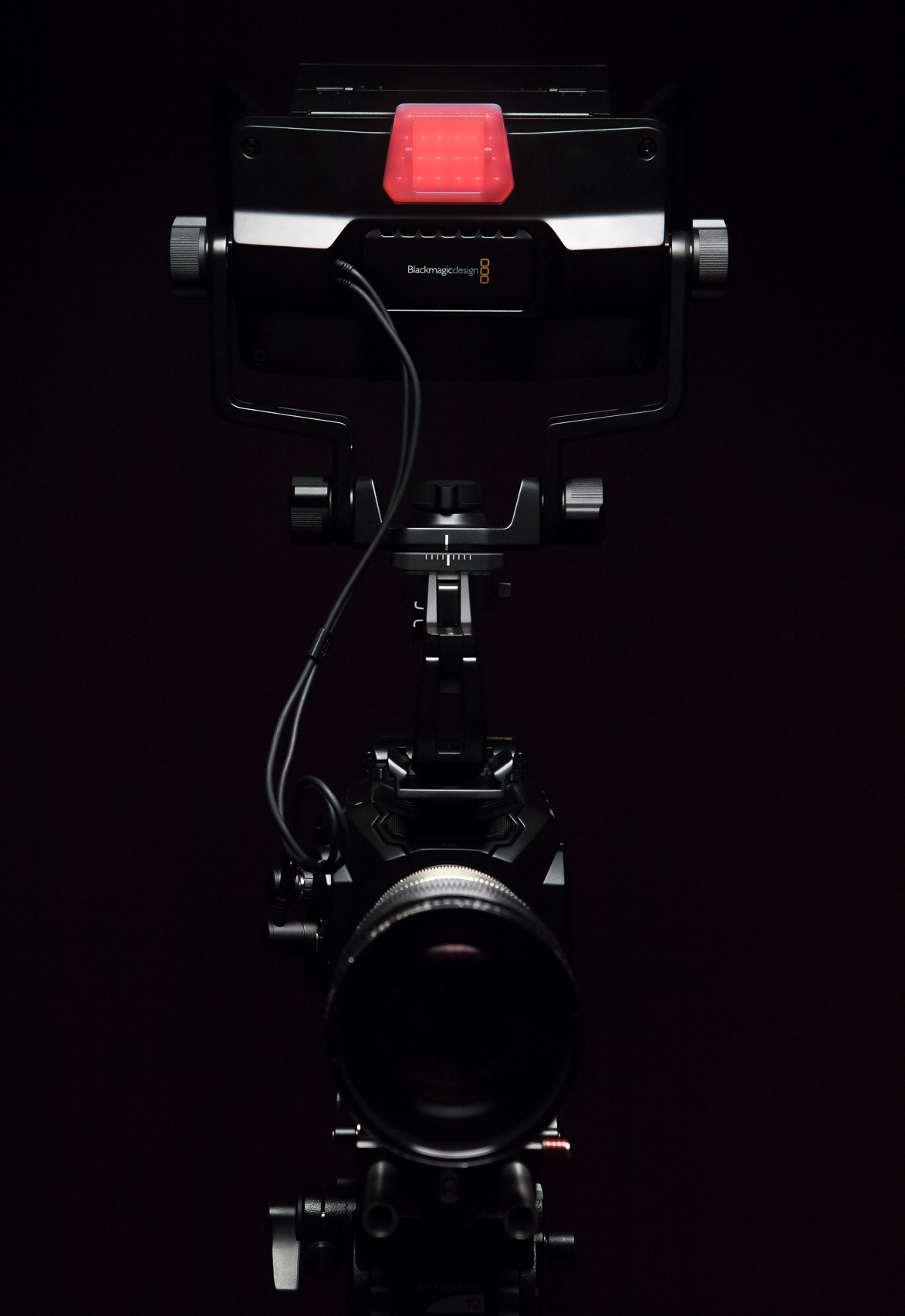 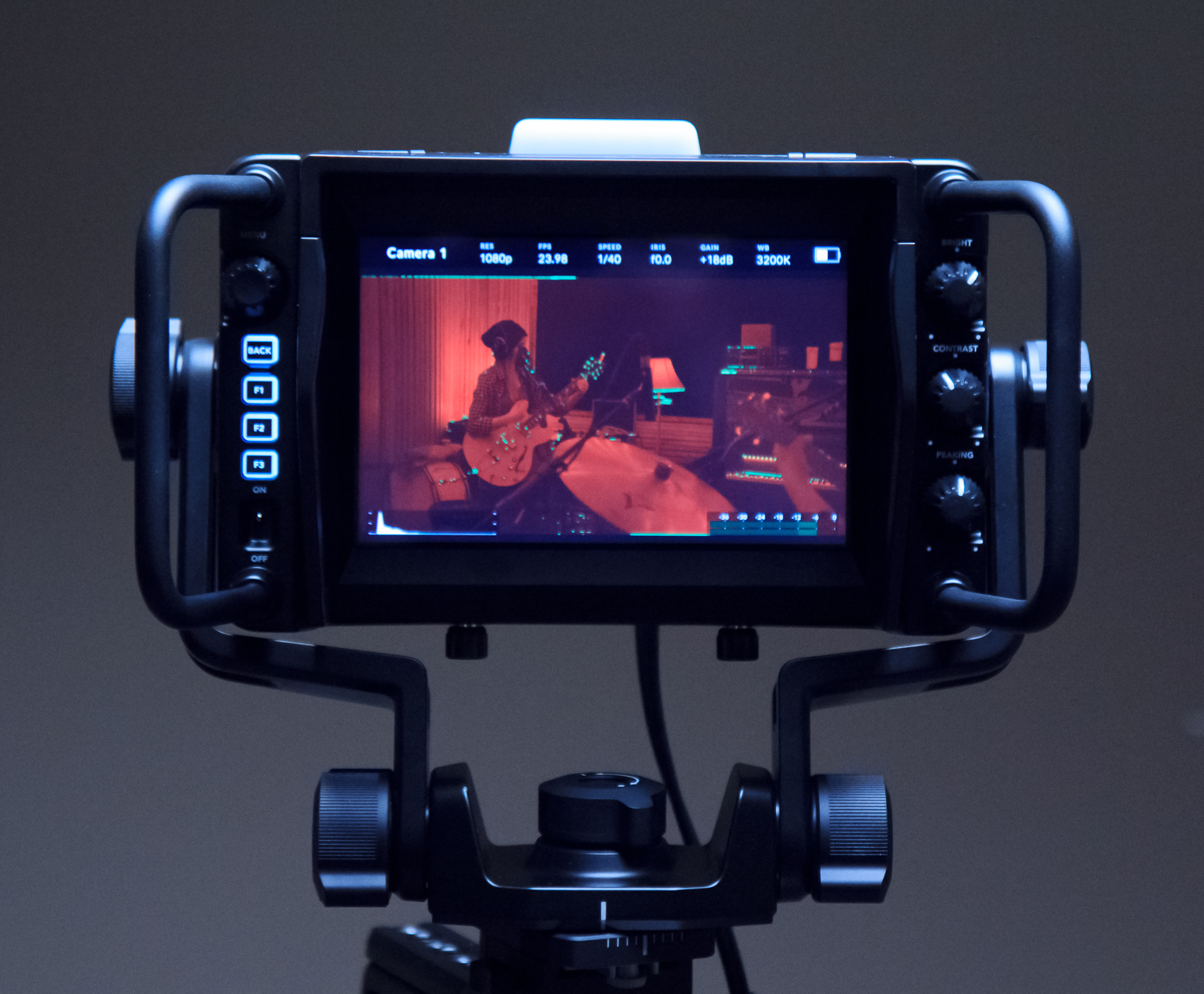