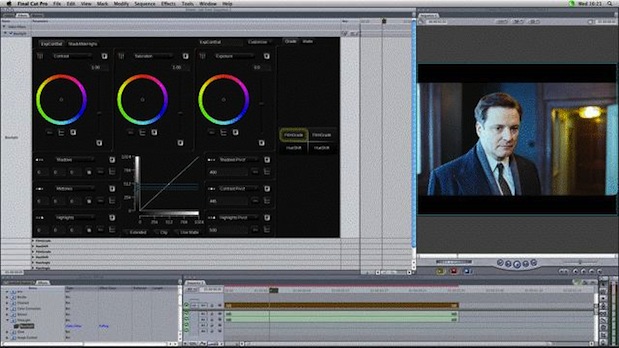 One of the first big announcements out of the NAB gate comes from Filmlight and it involves their Baselight product line. The overall news is an update to Baselight (taking it to version 4.3) and a new Blackboard 2 control surface. But the biggest surprise comes in the form of the Baselight Plug-In for Final Cut Pro. This “under $1,000” plugin looks to offer parts of the actual Baselight user interface right in FCP’s Viewer window.

Here’s the bullet points from the Baselight Tutorials website:

And for a bit more details check out their PDF press release. Here’s a quote:

Baselight for Final Cut Pro is not merely a port that uses the Final Cut Pro interface. Rather, it provides editors with access to Baselight functionality directly within the application. Editors can grade projects and then either render within the host application, or export the grade as an XML list-with all metadata preserved-to a full Baselight system for final adjustments and rendering. Similarly, grades prepared in a Baselight suite can be exported seamlessly to Final Cut Pro for conform and final editing.

Baselight for Final Cut Pro provides additional cost savings in that it is compatible with Avid MC Control and MC Transport panels. It does not require FilmLight’s Blackboard control surface.

I think this is pretty significant as that allows a color grading control surface right in Final Cut Pro for the first time, what used to be the MC Color but is now the Artist Color from Avid (I hope Tangent Wave support is coming too). If you have a Baselight in your facility or you send work to a Baselight colorist it looks as if they can give you back all of their grading data for you to render in your Baselight FCP system. That’s cool too, not because you want to tweak a colorist’s work after the fact but rather you can get all the grades back to FCP for final finishing without the grades being backed in.

How will this work with the new FCPx? That remains to be seen but it’s probably written using FCP’s more modern plug-in architecture which I’m guessing FCPs will support as well. If you look at the images above you’ll see a red render bar in the FCP timeline which says Baselight for FCP isn’t realtime. But most of the other major color grading plug-ins for FCP aren’t either. If FCPx has some really good GPU performance then imaging Baselight in FCP with a control surface running in realtime. That’s exciting stuff provided FCPx can do “pro” things like that. Stay tuned for more news on this product. 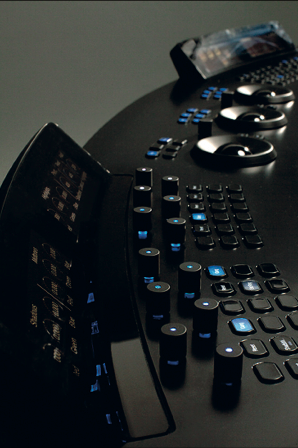 The Blackboard 2 control surface. Baselight says it has a wood finish.

Baselight also announced an upgraded control surface in the Blackboard 2 . There more information available in the press release PDF too.