It’s a little sad to see such a new, powerful tool come along this late in legacy FCP’s life

At NAB 2011 FilmLight surprised most everyone with a preview of their Baselight for Final Cut Pro plugin. It was surprising because I think many people expected them to release a lower cost, Mac-based version of their flagship Baselight color grading tool. Instead they showed a different strategy that looks to revolve around very powerful color grading plugins and interoperability with the full Baselight systems. The FCP plugin had been in beta for a while and was just released. For $995 Baselight for Final Cut Pro can be yours.

The Editblog posted a video preview of the FCP plugin a while back. I’ve been playing with the Final Cut Pro 7 beta plugin recently as it’s available to current Baselight customers and my employer, Filmworkers, has several of the Baselight systems. I think the elephant in the room that must be addressed is that this plugin is for legacy Final Cut Pro (you may have been seeing banner ads around the internet) and legacy FCP for all practical purposes is dead for many. At $995 that’s no small investment to be made in support for dead or dying technology but there are still a lot of FCP7 systems, users and installs out in the world. Filmlight has had the Baselight for FCP in development for some time and probably had no idea that Apple was going to change direction with FCPX so it makes sense to try and recoup at least some development costs. Larger facilities that are a primary target for the Baselight for FCP plugin probably aren’t moving to FCPX anytime soon and will keep their FCP7 installs working for the foreseeable future, possibly until Apple abandons it entirely in the Mac OS. In addition to the FCP plugin, Filmlight has announced a Baselight for Nuke as well. The idea of having the Baselight functionality directly in an NLE makes good sense to me so maybe we’ll see Baselight for Avid Media Composer or Adobe Premiere Pro. 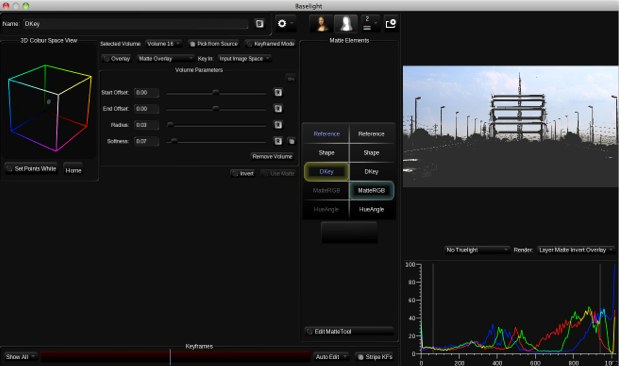 The Baselight for FCP interface pop-out showing a key pulled with the DKey.

I’m not a Baselight colorist but I’ve pounded away on it quite a few times working on some of my own projects. It’s amazing to see what is pretty much a duplicate of the Baselight interface in the Viewer of FCP. It really shows the power of FCP’s effects architecture that something like this could be a plugin. In fact Baselight for FCP is one of the most advanced plugins for FCP I’ve ever seen.

Baselight isn’t the most user friendly interface in the world so a new user will definitely have to take some time to understand exactly how it works. There’s not a whole lot of information out there on Baselight and the one that is, Baselight Tutorials, has been down for a while. I only understand a fraction of it myself. One use for this plugin, according to the Baselight for FCP website, is education: “An editor familiar with Baselight for FCP can easily transition to using the same interface on a fully-configured Baselight system, providing an easy learning and migration path.” This would let the colorist unfamiliar with Baselight get up to speed on the interface since the Mac version of Baselight that exists isn’t available to the general public. It’s only for full Baselight system customers. Since there’s a free 14 day trial of Baselight for FCP available you can get a taste of Baselight right on your Mac. 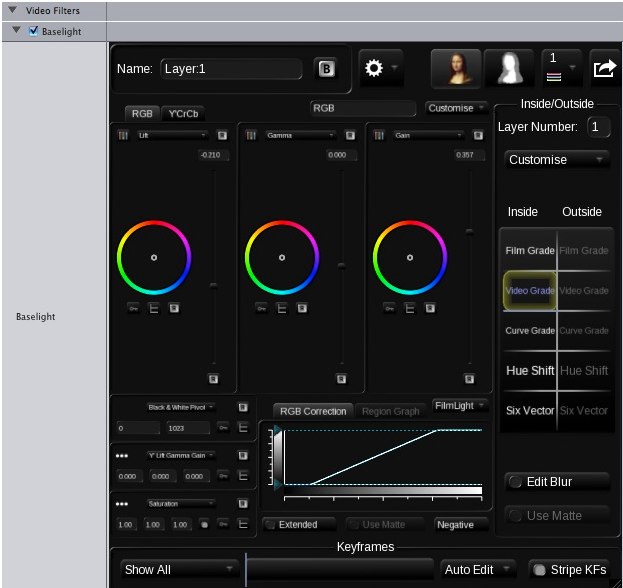 A Video Grade showing the familiar Lift, Gamma, Gain and color wheels. This interface in the FCP Viewer can be popped-out for more options and serious grading work.

I’ve only dug into a small part of the Baselight for FCP plugin but for simple Lift, Gamma, Gain corrections and some keying. The Video Grade option will look most familiar as it is based off the color wheels that most editors have come to know well. Baselight is a layer based color corrector (as opposed to DaVinci Resolve which is node based) and in the FCP version you can add layer after layer as you build a more complex grade. The Baselight for FCP videos can walk those curious about Baselight through a few operations to get a quick idea of how it works. All the things you’d expect from a color grading tool are there: mattes and keys, hue and saturation controls, filters and curves, shapes and windows just to name a few. The Avid Artist Color series control surface is supported as well if you happen to have that hardware interface as an option. 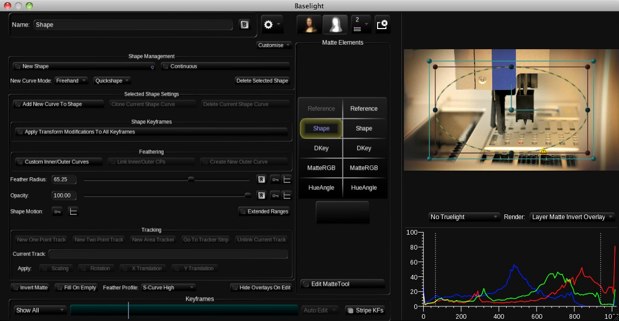 A simple oval shape is shown above, used to put a vignette on the image. 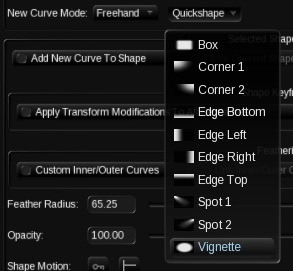 There’s a number of shapes predefined or you can draw your own custom shape in the pop-out interface.

Speaking of the interface, while you do see a mini-version of the Baselight interface right in the FCP Viewer Filters tab, you can “pop out” the Baselight interface into a much larger window. This will be the preferred way to work if you’re doing any serious grading. Controls are fast and responsive (I have been using only a mouse) and there’s an option to “Always Sync Updates with Final Cut Pro.” This makes the onscreen feedback more interactive outside of the pop-out window as you tweak settings. That’s important as the interface is quick to update both in the Baselight window, the FCP Canvas, the FCP video scopes and the grading/client monitor hooked up to a third party video card. The overall response wasn’t that much less with the Always Sync setting. There didn’t seem to be an option to make that setting stick by default as I kept having to turn it on when applying new filters.

It’s cool to see the RGB values pinpointed in the histogram below the image viewer as you click and drag around the viewer when the Baselight for FCP interface is popped out.

One strong selling point of the Baselight for FCP plugin is its ability to interface with a full Baselight system. Work you’ve done in FCP can be exported via XML back to the full Baselight for further tweaking. The flip side of that is that anything done on a full Baselight can be XMLed back into FCP. Apparently even grading operations that require tools from the full Baselight can be brought back to FCP though they won’t be editable I assume since there are some tools the FCP version doesn’t have. Read over the offical word at this PDF. This type of round-tripping could come in very handy. Imaging being able to offline the edit, send it to a full Baselight for grading, get the grades back into an FCP system (with the Baselight for FCP plugin installed) for the online but still have the ability to extend shots if need be since the grades wouldn’t be “baked in.” Once the program is done then render the final grades in FCP. That’s a really nice workflow. 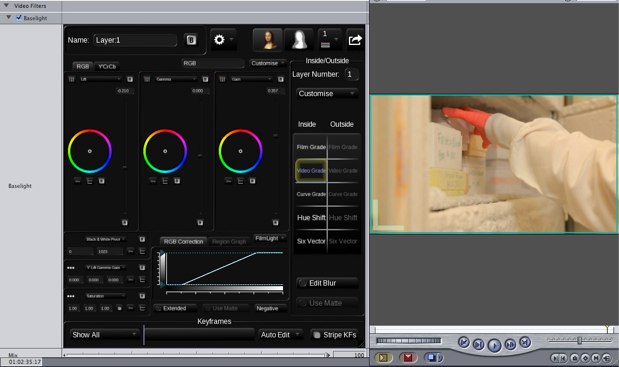 One task was to mute the very bright glove above. 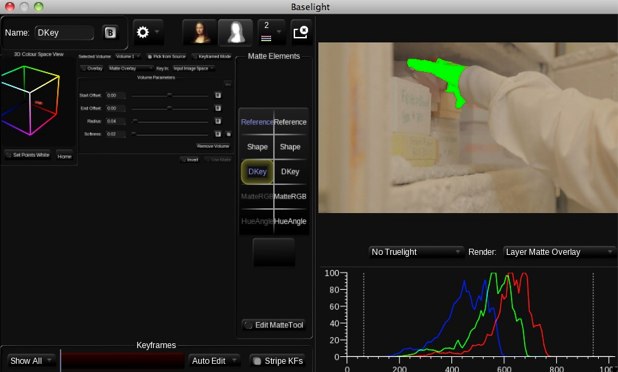 A DKey was able to isolate the glove and view the matte with the Layer Matte Overlay options, among other matte viewing options. 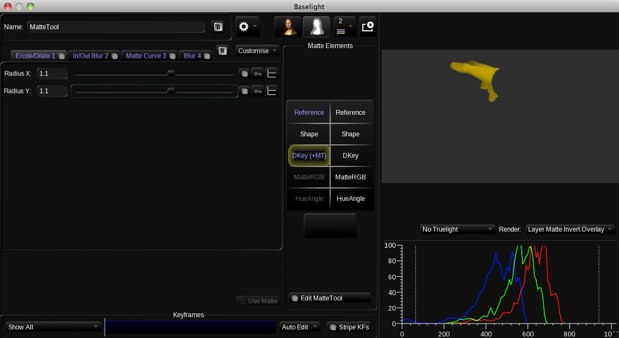 A bit of softening helped the key. 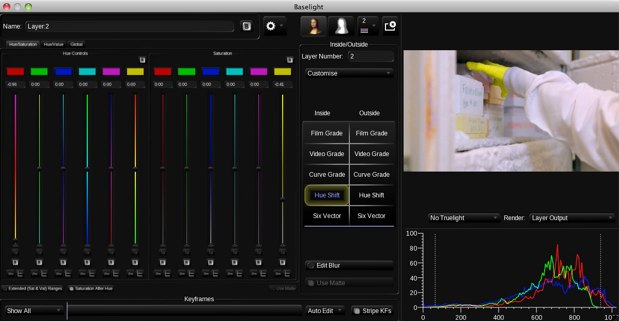 The Hue Shift option was then used as a tug of a slider turned the glove into a more muted yellow that blended with the scene.

Now for a bit of a lament: seeing a plugin this powerful in legacy Final Cut Pro 7 makes me sad. Many of us are moving beyond legacy FCP since it is no longer being developed by Apple. The Baselight for FCP plugin is a good reminder of just how robust, powerful and useful FCP has been all of these years. While Baselight for Nuke has been announced I think its real usefulness will come in the NLE. Only I’m not sure how useful it really will be in FCP7. I’ve heard that Avid’s AVX plugin architecture is more difficult to develop for than that of FCP so we might not see it on Media Composer any time soon. Ditto for Adobe Premiere Pro. I doubt Filmlight will sell that many seats of Baselight for FCP to the casual FCP user though it’s probably the most powerful color grading tool for FCP7. If you’re a facility that is heavily invest in both Baselights and FCPs a $1000 plugin will pay for itself in a single headache saved on a single job. I hope there are a lot of situations out there like that as Baselight for Final Cut Pro is one helluva tool.