A first look at Avid Studio for iPad, and an extrapolation as to what it can mean for pro video editors in the short and longer term. 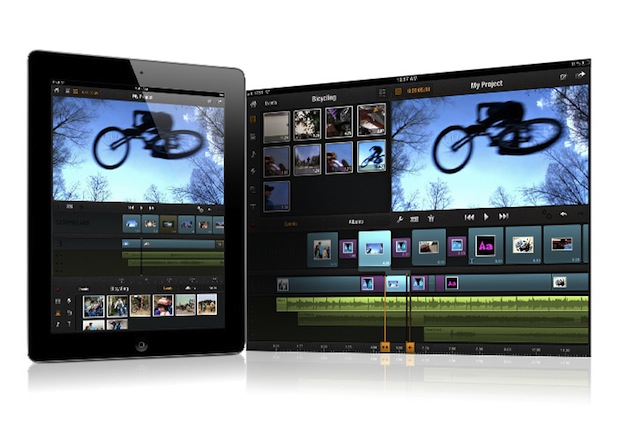 I was privileged to find out a few hours in advance of the public announcement of Avid Studio for iPad, since Avid contracted me to translate and localize the press release, as fortunately they often do. There was something about this press release that really intrigued me. It wasn’t so much the specific advantages that Avid Studio for iPad has over other editing apps for iPad, like offering both Storyboard and Timeline views in a single iPad app, or being able to import source material from anywhere inside or outside of the iPad. It was more the fact that the announcement was coming from Avid, and the spirit of the two quotes that appear at the end of the press release. In this article, I’ll give a first look at the app, define what it is (and what it isn’t), and extrapolate about what this can mean for video editing in the short, mid, and long term. Of course, I’ll include those two quotes that intrigued me so much.

Those scintillating quotes from the press release

Both of the following are the original English versions.
First, a quote from Avid:

“More and more users are relying on mobile devices for media content creation, viewing and sharing, and we’re proud to deliver a feature-rich new app that takes powerful Avid technology and adapts it specifically for the iPad. Now video editors have a great, powerful and fun way to create movies and tell their stories,”

“Editing enthusiasts can now use a mobile application that has our industry-leading video editing technology built into it -with the interactive capabilities of iOS- to help them make incredible movies at home or on the go.”

Now a quote from a user:

“As a content producer, I can tell you that a video editing app like Avid Studio for the iPad is a breakthrough. Avid is the industry leader in the field of editing. Being creative and having trust in your tools is essential. Whether you’re new to video editing and animating a series of family photos, or a seasoned professional working on a music video for the “next big thing,” having a robust editing tool in the mobile environment is a must. The technology is here and the time has come with Avid Studio for the iPad,”

Did those quotes intrigue you as they did with me?

Avid Studio for iPad, not Avid Media Composer for iPad 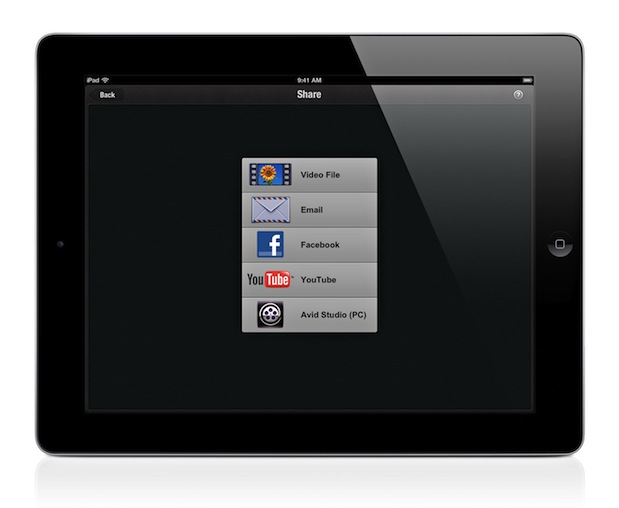 For sharing a video already edited with Avid Studio for iPad, it offers e-mail, Facebook and YouTube. Vimeo and DropBox are mysteriously missing, although I imagine that Avid will add those capabilities soon.

UPDATE: This section of the article has been revised thanks to the comments/corrections by reader Conzza. Thank you Conzza!
According to Avid, Avid Studio for iPad will not allow you to import 1080p video files. If you have a camera that can shoot 720p29.97, 720p25, or 720p23.976 (See my article called Why the iPad will dictate your shooting framerate & shutter speed) then you should be able to edit with no problem. Avid Knowledge Base article 432599 states:

This information applies to Avid Studio which runs on iOS.

Avid Studio will detect and use all video that is supported by the device itself (with the exception of 1080p and protected files).

But Conzza says that Avid Knowledge Base article 432599 isn’t quite true, and that using his iPad 2, he is able to import 1080p files from his Canon 7D camera into Avid Studio for iPad, but that Avid Studio for iPad unfortunately will only output 720p. Let’s hope Avid updates the app soon to permit both input and output of 1080p.

In the next 72 hours, I expect every video editor on planet Earth who already owns an iPad to purchase and download Avid Studio for iPad. At US$4.99 (introductory price) they won’t be able to resist the temptation to try it, even though some of them may be aware of the current limitations which exclude 1080p (at least output). And even if their first experience is with video recorded with the iPad 2’s built-in camera (which records up to 720p anyway), I expect them to fall in love with the Avid Studio for iPad’s interface and its use of the touch-screen.

The next 90 days for Avid Studio for iPad

In the next 90 days, I expect Avid to update Avid Studio for iPad to support 1080p output and output directly to Vimeo and DropBox, and I expect Avid to be showing it off at NAB in April with 1080p, either on an iPad 2 or (if it’s released on time) with an iPad 3.

The next two years

I believe that editors will become so attached to the touch-screen that they will demand higher-end features. It will be up to the developers whether they’ll want to add them to the current versions (i.e. “Avid Studio Pro for iPad”) or release corresponding higher-end products to the desktop equivalents (i.e. “Avid Media Composer for iPad”).

Is Apple jealous of Avid for having a more professional video editing app on the iPad first?

I really doubt that Apple is jealous from a business perspective, considering that Apple will earn 30% on all of Avid Studio for iPad’s sales. Of the US$4.99, approximately US$1.48 will go to Apple without Apple having to develop the product.

For more info or to buy Avid Studio for iPad at its introductory US$4.99 price

On the web, visit www.avid.com/studioapp for more information. To find it on the Apple AppStore, click here.