It was announced at NAB and now it’s shipping: the next version of Avid Media Composer which looks to be version 8. I had heard that Avid was going to move away from version numbers with the new subscription program but you might see the v8 designation which is this new version. The official name is now Media Composer | Software for that downloadable version most of us will use. 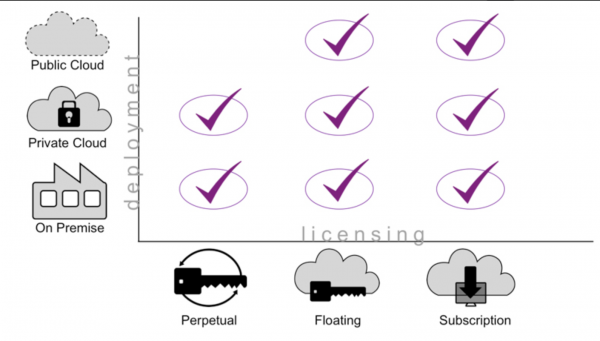 The best outline I’ve seen for What’s New comes via this Avid Blogs post that outlines what’s new. Obviously the biggest news is the different pricing options that includes both subscription (“rent it”), perpetual (“own it”) and floating (“lease it”) options in the mix. I didn’t come up with those terms, that’s in the What’s New blog post. Flexibility is good but what has to be noted is that with the perpetual “own it” license you have to buy an Avid Support plan at $299 per year in order to get any updates. From that PDF fine print we need to understand this about the perpetual “own it” license and the new yearly support requirement:

If you decide not to renew your plan, you can still continue using Media Composer (you own it) at the last version update received. However, should you decide to upgrade your software later on, you will need to purchase a new perpetual license ($1,299) again, or you can choose to start a subscription.

I don’t think that’s the end of the world but it has to be noted if you opt for an own it model, especially if you have multiple seats. My guess is Avid had to go this route so they could properly offer upgrades legally and promptly in the new subscription software world that Adobe has pioneered with the Creative Cloud. The days of having to wait for big, monumental feature releases seem to be over. But different from what Adobe has chosen to do Avid is offering options so that is a good thing.

Since I already own Avid Media Composer with the Symphony option I think I’m going to opt for the perpetual license which means I’ll have to pay $299/year for support. From what I understand from the Avid Media Composer License Comparison Guide pdf I’ll just have to keep buying that support year after year. I have until the end of 2014 to do so. Effectively that’s kind of like a $25 / month subscription for existing Media Composer owners. I’m guessing I get to keep the Symphony option for that but looks like we won’t get the NewBlue Titler Pro 2, Sorenson Squeeze Lite or Boris Continuum Complete Lite. This seems like it’s forcing support on some of us who never have used it but if you bought a $500 upgrade for MC every year then this new $299 support option will save you some money.

One big rumble that has gone through the Avid Media Composer world with this update is that ScriptSync and PhraseFind is no longer an option. Avid didn’t make much of an issue of the rather large omission (large for those that depend on these great technologies) by that Knowledge Base article linked above was quickly discovered. This is all due to the licensing of technology from Nexidia and it was followed up on the Avid-L mailing list that talks between Avid and Nexidia are underway as they try to hammer out an agreement. You can dig around the Avid-L2 group posts to see some of the reactions.

I think it’s safe to say that both ScriptSync and PhraseFind are VERY important to Avid and they will do all they can to bring them back to Media Composer. I can imagine that attorneys and accountants on both sides flipped their lids when Avid when to this subscription model and that would really change the way Nexidia made their money through licensing when the customer payment model changed. Avid had a target date in mind to release this new version and had to launch at their planned date, Nexidia contract in place or not.

While you wait on ScriptSync to come back to MC, Frontline documentary editor Steve Audette has outlined a workaround for using Avid Media Composer Script Interpolation in place of ScriptSync.

There’s several other changes to the bundled software that have come with Media Composer in the past. Both Boris Continuum Complete and Sorenson Squeeze now come in a “Lite” version with options to upgrade to the full versions. Most all details of this can be found in the Media Composer Licensing FAQ. It’s too bad that Avid FX isn’t a part of this version as that was the key to getting blend/composite modes in Media Composer since those aren’t built in. The BCC Composite effect was another way but that’s not part of the BCC Lite according to the FAQ.

UPDATE: Boris FX have announced he new Boris RED 5.5 for the Avid Product Family. Full compability with the old Avid FX you just now have to pay extra for it. From that Boris RED 5.5 announcement: “Owners of previous versions of Avid FX (now Boris RED), including the bundled version from Avid Media Composer, Avid Symphony, and Avid Newscutter can upgrade to Boris RED 5.5 for $295 (MSRP USD).” And seems there's a new RED v.6 coming later this year.

As for features in this new Avid Media Composer update, there are a few that seem to have crept in, some making their way in from NewsCutter. The most interesting one seems to be Alternate Edit.

That seems a bit like Auditions in Final Cut Pro X but I may be way off since I’ve never used the Alternate Edit feature in NewsCutter and don’t quite get it exactly from that description. NewsCutter was around before FCPX so it won’t be Avid copying an Apple feature if it is like Auditions.

It is a brave new world of Avid Media Composer but the first question Avid users must answer is how to license. That’s a question we never asked with any of our NLE software just a couple of years ago.