While audio in video is not only music, music is an important part for new videographers. Be sure to use only legal music! 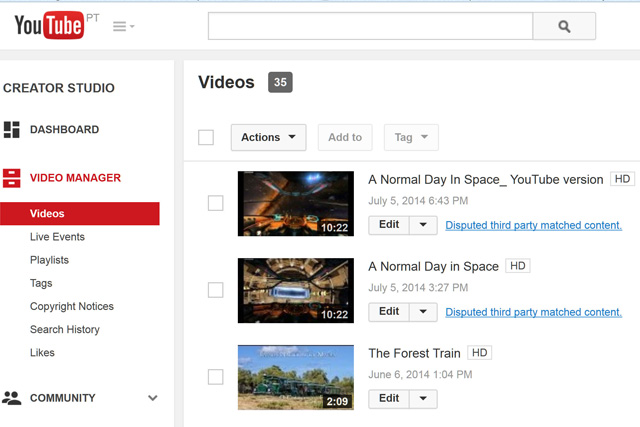 When starting in videography with a DSLR, the main problem a newcomer has is with sound. DSLR’s excel at image but are absolute crap when it comes to sound, either monaural or stereo. So, the first option for someone starting on this path is to skip the sound recording at the source and think of some background music or sounds to add to the video afterwards. Choose your music widely.

Music is easily what comes to mind first, because it is somehow easy to work with, and a well chosen theme will do wonders for your images. Ambient sound clips are great, and some can be used, but mostly new videographers – unless they have deep pockets or a rich aunt –  will look for music.

Now, using music in your videos is a problem. We all know some story of a professional wedding photographer – in the early days of video and the web – that created a great video from the happy couple, and used some very popular musical theme to go with the images. Then, the video appeared on YouTube (or similar website) and a lawsuit followed.

People – some people, it seems – have learned that they can not (or should not) use the themes from their preferred artists on their videos,  but some still continue doing it, unaware of the consequences. Or not really caring about the rights of others… There will always be people that do it, for movies used in private, but, in general terms, it is a bad practice, and one that any videographer aiming to share his work professionally or simply with friends and family, should avoid. I do understand people love to mix their images with sounds that say something to them… but there are other options and sounds that will also be meaningful to you, if you care to explore the web.

Although video is something new to me, I am quite familiar with photographic slideshows, and for those I also use music as an essential component to create the mood, as shown on the example used here, created for an exhibit, DIIS MANIBUS – Rituals of Death During the Roman Age.  Choosing a theme that adapts to a series of still images is as difficult as picking the music for moving images.  You need both to have an idea of what you want… and ways to get it legally.

I’ve explored different sources through the years, but I’ve somehow settled for a single source for my music material, as I tend to find there solutions to my needs: the website Incompetech, from Kevin MacLeod. This author and composer shares much of his music on a Creative Commons License that lets you use the themes freely for multiple purposes. 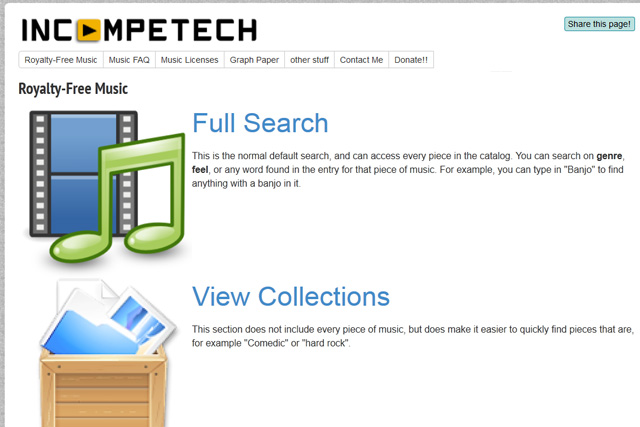 Incompetech offers a large collection of music usable by videographers. Visit the website to know more

Incompetech also sells music, so it is your choice to buy some of the themes. You can also pay a sum and download all material available on the website. Everything is clearly explained  by Kevin MacLeod, so no one has doubts about the legal aspects of using his music. This said, you might have some trouble when you put your videos in YouTube (probably in other similar websites, but my experience is with YouTube), and this is a something I think may be of interest for a lot of people. So here it goes my story. 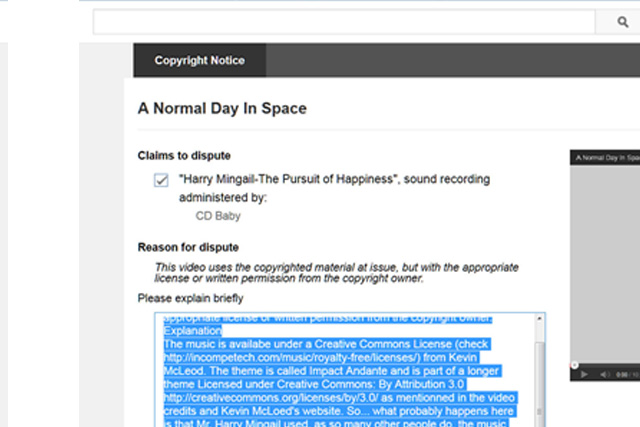 The Copyright Notice from YouTube, a sign that the automatic system has marked your audio as someone elses. Dispute the Claim if you know you are not doing anything wrong!

When I recently uploaded a video to YouTube, showing what intends to be a narrative of a space pilot’s day in the virtual world of Elite Dangerous (a PC game to be launched by the end of 2014) I was surprised to get, within a few hours, a warning under my video – Disputed Third Party Matching Content – and a note from YouTube stating that the video used copyrighted material, but with the appropriate license or written permission from the copyright owner, I could continue to use it. This type of claim is nothing new to me, but I must say I had not seen it happen for some time. Being absolutely sure that I was using legal music, perfectly identified in the credits at the end of my video, I did what I’ve done before: I disputed the claim.

Being a journalist at heart (and well aware how the automatic detection of music in YouTube works…) I decided to investigate. The claim mentioned the theme I was using had a title, “The Pursuit of Happiness”, an author, Harry Mingail, and a company releasing the product: CD Baby. Following the links it was not hard to find that Harry Mingail is no composer, but a speaker at public events, and that the music from Kevin MacLeod was used in one of his videos published in YouTube. Furthermore, the, name of the real author appears in the final credits…  So, Harry Mingail, did, as many other people, me included, use Kevin MacLeod’s theme, which in fact is called “Impact Andante” and is part of a complete series of themes. 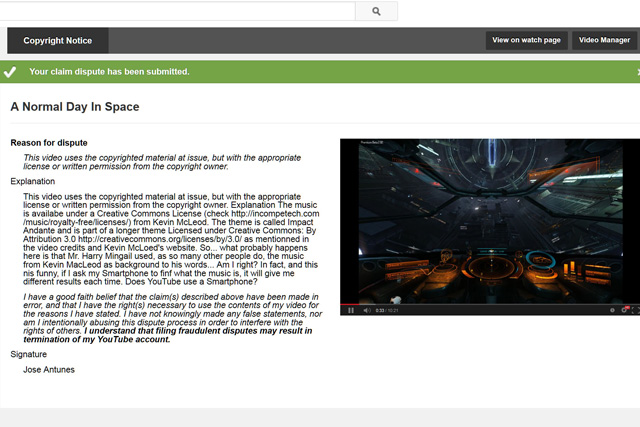 After having disputed the claim the system gives you a note that it has been submitted. In a couple of days the process ends

Aware of the confusion, I replied to YouTube stating my findings. Within 48 hours the claim was gone.  As I’ve written above, this is nothing new to me, I’ve had these problems with YouTube multiple times, and they’re  getting faster at closing these cases, what may be a good sign. But if I was not able to dispute the claim or filled fraudulent information, I could see my YouTube account terminated.

So, the best thing to do is to make sure any music or sounds you use in your videos are completely legal. There’s a wide choice of sources for people starting out with video (I point to some of them in my article More Sources of FREE Music and Sounds) that may be more than enough for a whole life of projects. And if at some point in your videographer career you find you’ve earned some extra money – if you go the professional way – , think of sharing some of it with authors like Kevin MacLeod.  But please, use legal audio on all your videos.