Easy-to-use scripts and other resources 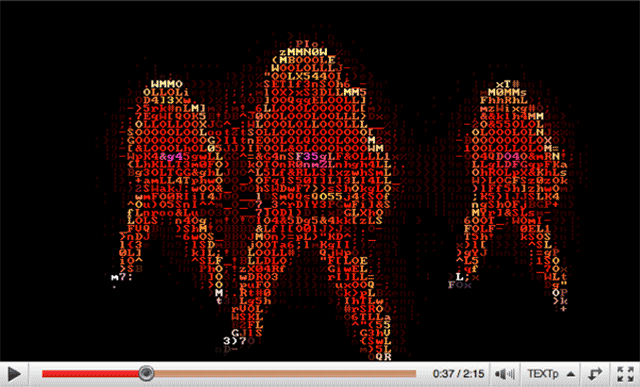 ◊ In 2011, TechCrunch noted that YouTube adapted their player with Adobe’s Pixel Bender to convert the videos into ASCII with a 3D effect; see Behind The Scenes Of YouTube’s ASCII Prank. The effect was available only on April Fool’s, and the only trace is YouTube’s post TEXTp saves YouTube bandwidth, money. In the same period, ASCIImeo, an ASCIIized version of Vimeo, was available but had disappeared by 2014.

At one point creating ACSII was a challenge, but now there are at least 2 scripts to help. L3tt3rM4pp3r, aka LetterMapper, from BGRA Entertainment, is an inexpensive textmode and ASCII art video mapping plug-in for After Effects from AEScripts.com.

There’s also ASCII Generator from Motion Boutique, with more then 200 presets, and now downloadable from Aescripts.com.

There are a number of other resources to view and create ACSII movies, including some other approaches for After Effects (not including particle effects):