AJA’s Io XT is the first professional audio/video with a loopable Thunderbolt connection. 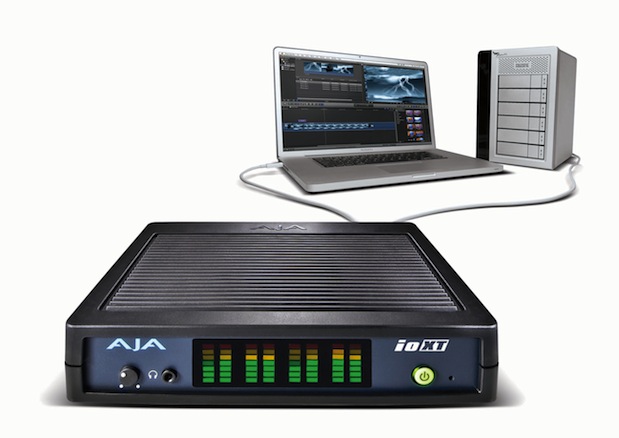 Today AJA announced and is showing its new Io XT audio/video interface with Thunderbolt at IBC stand 7.F11 in Amsterdam, Netherlands. Unlike other Thunderbolt-capable professional i/o interfaces from other manufacturers which I have covered earlier this week here in ProVideo Coalition magazine, the Io XT from AJA is the first and only one so far to offer loop-ability (aka “daisy-chaining”) to other Thunderbolt peripherals or even standard DVI/HDMI monitors via an inexpensive adapter or cable (under US$30 in most cases). This first look at AJA’s Io XT will cover its features, specs, and pricing.

As covered previously, the HP DreamColor monitor’s DreamColor Engine demands that its input signal be digital RGB over HDMI (or DisplayPort), not YUV. The HP DreamColor Engine also demands that the input signal be pure progressive (not PsF or interlaced). I have already covered the fact that Matrox’s MXO2 family devices already comply directly with the DreamColor at standard broadcast HDTV framerates, and that Blackmagic’s new UltraStudio 3D currently requires an additional device in order to comply. I am awaiting an official response from AJA to determine the Io XT’s status regarding this issue, and will update this article as soon as I receive their response.

Io XT is not a end-point Thunderbolt connection, which facilitates loop-ability

Io XT is not an end-point Thunderbolt connection (as are the current offerings from Blackmagic and Matrox), which is one of Io XT’s first notable difference. As a result, you can loop from your computer to your Thunderbolt-based disk array RAID (i.e. Promise’s Pegasus) to the Io XT interface, and finally to a standard DVI or HDMI monitor via an inexpensive adapter, which normally costs under $30.

Io XT is planned for availability in Q4 of this year for US$1495.