Setting up the motion tracker/stabilizer. 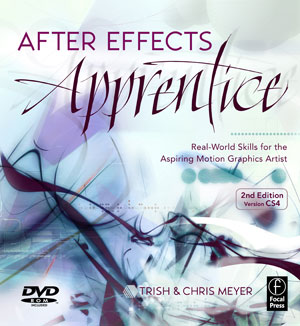 Earlier this year we released After Effects Apprentice (2nd Edition). The DVD-ROM that comes with the book includes an hour and a half of video tutorials that provide gentle introductions to major features inside After Effects. We are releasing these videos one per month here on PVC; they are also being made available on Focal Press’ web site – make sure you visit their After Effects micro-site for more related freebies.

This tutorial will help you get started with setting up the motion tracker and stabilizer built into After Effects. Although this video uses AE CS4, the tracker’s controls have been largely unchanged over the last several versions, so this will also be of use to those using other recent vintages of AE. The tracker in AE is much-maligned (and AE CS4 now comes bundled with mocha for After Effects as an alternative), but once you know the secrets of how the track points work and how to set its options, it works fine for a large variety of shots.