The 3+ hour video course on the Final Project from After Effects Apprentice 2nd Edition has finally been released. 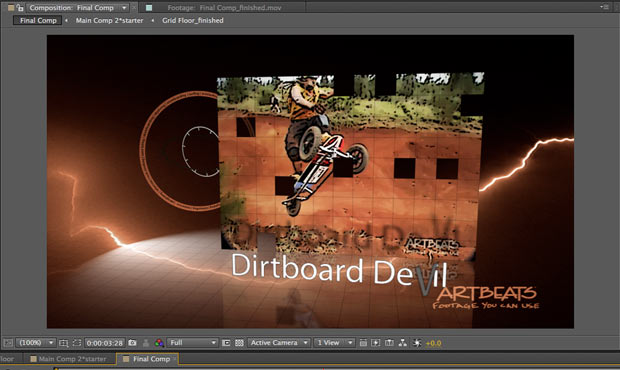 As we mentioned awhile back, we've been busy the past year and a half creating an extensive, multi-course video training series based on our popular beginner's book After Effects Apprentice. We're happy to announce that the course based on the Final Project from that book has now been released to subscribers of lynda.com, and is also available for individual purchase from Class On Demand.{C}

In this 3+ hour course recorded in After Effects CS5.5 and applicable to all recent versions, you will pull together skills you've learned in the previous Apprentice lessons, including using masks, effects, shape layers, text, layered Illustrator files, blending modes, track mattes, collapsed transformations, nested compositions, motion blur, expressions, animation presets, audio, a 3D camera and light, and more. Along the way, we share the mental process we go through as we design a video project, including unifying the overall look and handling client changes.

The final two “chapters” of this video package are mini-courses in themselves, as Chris discusses strategies for efficient rendering (including creating versions for archiving, non-linear editors, widescreen, center cut, and the web), as well as how to recreate the Illustrator “dial” elements using shape and text layers inside After Effects.

Below is the introductory movie from the course; we'll also be posting a series of free movies from the course next month (April will be busy enough with NAB!).

After NAB, we will be starting work on the third edition of After Effects Apprentice, bringing the book up to date with the current version of After Effects. At that point we will then produce additional video courses for the major additions to the book, including a new Final Project.