Rocket Randee Downloadable After Effects Rig Overview from Daniel Gies and friends is the reboot of the Rocket Randee character tutorial series for After Effects (an older set was done about 11 months ago). To kick things off they've released the Segmented Rocket Randee puppet project files at e-d-films. This long series of tutorials builds a multi-angled, segmented puppet using After Effects, Photoshop, Premiere Pro, and Pro Tools. For additional resources, see Animate a character in After Effects: A survey of resources.

In the recent 'Made With After Effects' event, Trish and Chris Meyer noted that many submissions (not this one) had predictable variation in motion tweaks, so some may need to change up their variables more often (like the ones shown by Anders Sundstedt, or perhaps with the animationPATTERNS script below). Here's Mr. Gies:

Andrew Kramer at Video Copilot announced that Metropolitan and Element 3D V1.5 is Now Available! The new update of Element 3D plug-in for AE is free. Metropolitan is a new model pack that features over 100 buildings and skyscrapers for creating 3D Cities and Virtual skylines inside of After Effects (but works with numerous 3D programs too).  Secret Feature: “Inside Element 3D UI, if you hold down SHIFT and click File, you can export your Extruded Text to an OBJ file”.

Here's the news from Andrew and company:

Paul Conigliaro posted the summary and transcript of MoChat 26 – After Effects’ 20th Anniversary, which has some historical details that even longtime users might not know. For more on the 20th anniversary, see After Effects at 20: A Trip Down Memory Lane.

The 2013 “made with after effects” top-10 were announced and later the finals show during the 3rd Annual Made with After Effects Competition, which streamed online free, with giveaways and guests. Good show, and ! Most of the giveaways ($4600 worth) are for answers to a final question: What does it mean to feed your brain? The answer must be in the form of a YouTube video, and you now have less than 7-days to complete the project.

Here's one of the finalists:

BAO Perspective Changer, by François Leroy, is an amped-up Corner pin plug-in (AE-native) that allows you to change the perspective of your image without degrading it.
animationPATTERNS, by Markus Bergelt, is “a keyframe-based easing assistance, that allows you to edit and create new easing types. It comes with a dockable palette, a set of default interpolation methods like bounce, rubber, pendulum… and is very easy to use! !animationPATTERNS does not work with properties that already use expressions. They'll get replaced by clicking apply pattern.”
For other assist tools see AE Preset: Back N Forth + animation aids. Here's Markus:

For homebrew types, Johan Borgstrom shared AFX Preset: Sinful Animation ;p (for a sine-type blinking) and After Effects and Trigonometry (for expression involving arcs), both which leverage another post Unit circle, which demonstrated the relationship between rotations in degrees and radians and coordinate values.

Meanwhile, Mamoworld is offering a New Upgrade Path for iExpressions, which provides UI access to expressions:

After Effects: Smokey Rays, from Motionworks, is a free AE project download for rendering a moody background with volumetric rays. It's “based on After Effects’ Fractal Noise and Optics Compensation effects, with some Curves, 4-Color Gradient and Mojo for the colour grade” and created in full HD.

Clay Asbury posted an article, Importing Premiere Pro Projects Into After Effects. There's more in Import an Adobe Premiere Pro project in AE Help, Alternate workflows by Oliver Peters, and of course from Stu Maschwitz. His DV Rebel's Guide was mostly on finishing movies in a pimped up After Effects, and some years ago advocated merging Adobe apps to beat Autodesk Smoke to the desktop (or even Hitfilm). That didn't happen and, while we're waiting for the next steps, founder-connected filmmakers demo more mixed workflows for Adobe in The making of “Waiting for Lightning”: recording and notes from seminar with Jacob Rosenberg at Premiere Pro Work Area. Here's Maxim Jago on Sending Work from Premiere Pro to After Effects: 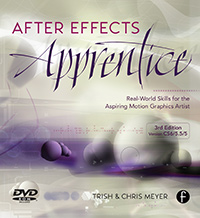 Ninja Crayon has a new Book Review: After Effects Apprentice, on the new edition from Chris and Trish Meyer.

Next, In Depth: Time Effects – Time Displacement aka Slit-Scan, with Examples by Michele Yamazaki looks at a few time-displacement plug-ins. Toolfarm has an identity crisis with its “After Effects Portal Facebook group,” where Eddy Bergman posted a note on his tutorial Slit Scan or Time Displacement Effect Tutorial; it's an in-depth discussion of AE's Time Displacement effect. BTW, Toolfarm's Top Ten Plug-ins is back up.

For more on slit-scan videos, see Golan Levin’s comprehensive Informal Catalogue of Slit-Scan Video Artworks and Research, which includes various forms of code to build your own. He doesn't seem to include a reference to pioneer John Whitney, who demoed his slit scan set up to Trumbull and Kubrick. See also My God! It’s full of stars! Slit Scan camera effect in After Effects 6.0 by Stephen Schleicher. Here's an older tutorial on displacement:


After Effects and the state of GPU computing by Phil Rhodes at Red Shark adds another voice to the chorus hoping for Mercury Engine acceleration inside After Effects. While AE is 20 years old, it might not be too old or downmarket to pick up ideas from other more expensive apps. Even inexpensive apps can have interesting features, like HitFilm 2 with all-in-one editing, effects, compositing, 3D particles, and 3D models. Perhaps it's just a matter of time until AE has some things shown in this eyeon Software GPU or in Nuke 7 or even Hitfilm:


The Conduit Effect System is now available as a set of free plug-ins for Mac OS FCP X, Final Cut Pro, Motion, Aperture, Photoshop, and After Effects. Extending this is PixelConduit Complete, a $129 add-on pack that provides functionality for advanced tasks like live video recording, creating cues and events, batch processing, working with stereo 3D footage, and a live video interface with other apps.

“…Conduit has an exciting new lease of life. It is now called PixelConduit, it works in FCPX and it is now free.

The majority of plugins that are now released for Final Cut Pro X are written in Motion. In fact they shouldn't really be called plugins, they should be called Motion effects. There is a limitation to what you can build within Motion and very complex effects tend to slow everything down.”
Here's an earlier version of Conduit in action:


Awhile back, Clay Asbury posted the text Speed Ramps & Freeze Frames in After Effects. Here's Todd and Angie in Slowing Motion, Freezing a Frame, and Reversing Time from Adobe After Effects CS6: Learn by Video.

Indie Mogul mentioned Flying Tutorial (Monday Challenge: Flying), a kicked-through-a-wall effect, from FrogMilan on YouTube. The kids are getting good, even in a first tutorial.

The answer is yes, of course, but watch out for Venus Flytraps. Templates have gotten even more popular since Topher Welsh wrote it, but his roundup still seems to be the best overview: 20 After Effects Template Websites.