The beauty of Adobe After Effects is that it’s approachable for simple tasks and at the same time has a feature set capable of producing complex film quality effects.

The beauty of Adobe After Effects is that it’s approachable for simple tasks and at the same time has a feature set capable of producing complex film quality effects. In the olden days we had to walk miles through snow to pay for After Effects tutorials, if there were any, but now there’s tons of worthy free stuff. The biggest gotcha with this material for beginners might be the new previewing features (more below) in the 2015 version of After Effects CC. General sage advice is to “start at the beginning,” but knowing Photoshop and Premiere or Final Cut gives you a big head start.

Adobe has After Effects CC tutorials from novice to expert and other resources in blogs (in several languages) and in Adobe Learn & Support, which contains the essential if sometimes elusive online manual that’s always good to have at your fingertips (on the web or PDF).

Beginners are free to ask questions on Adobe’s After Effects user-to-user forum, but there’s quite a bit more also available for beginners before taking stabs in the dark. Learning some basics learned in Photoshop is crucial but not difficult, like understanding the definition of a color channel or knowing the location of pixel 0, 0. One of the most important things to remember is the approach of “divide & conquer,” that is subdividing tasks into doable chunks: when searching for natural keyframes in a timeline or when duplicating layers, masks, and/or effects for keying green screen footage. Another important thing to remember is the After Effects rendering order, basically Masks, then Effects, then Transforms (position, scale, etc.) – but with gotchas!

Lynda.com has an updated course for After Effects CC 2015, After Effects CC Essential Training with Ian Robinson. In July 2015, it was the only course on the 2015 version of AE. Here’s one of the sample movies, on 6 workflow steps:

There are multiple ways of doing most things in After Effects, and it’s easy to learn a few timesaving shortcuts. The most essential are the keys PARTS, which are individual keyboard shortcuts that reveal animation controls for Position, Anchor Point, Rotation, Transparency (opaciTy), and Scale.

The complete list can be found in the Keyboard shortcuts reference in After Effects Help. A pleasant alternative is Jamie Spencer’s Creative Cloud 2015 Keyboard Shortcuts cheatsheets. There are several good videos of tips and shortcuts for AE, like Useful Tricks in After Effects You May Not Know About by ukramedia, in 3 parts so far. Here’s UX in Motion on some shortcuts (PDF available):

Video Copilot offers a free 13-hour Basic Training series from Andrew Kramer, a top trainer who brings the fun in more than 150 other serious tutorials. The only downside is that this series is based on an old version of After Effects, so see the explanation of new previewing features by Motionworks if you’re using the 2015 version of Creative Cloud. See especially the summary of this VCP series by former Adobe Help sage Todd Kopriva, which mentions what each episode shows especially well and adds links to documents that provide more information.

Previewing in CC 2015 will be a big sticking point after all, so the latest beginning tutorials are recommended, like ones at Lynda.com. After Effects: 2015 Creative Cloud Updates by Chris Meyer will likely be the best explanation around, and he’s offering a free 10-day pass too. If you want to nail previewing, see all about previews in After Effects CC 2015 (13.5) by Tim Kurkoski, which even old timers will need to consult over & over.  Given the problems often found in major new releases, new users might want to learn on an older version of the app, then switch to a stable release when oriented. But if you’re a member of Lynda.com, you can learn with the updated course for After Effects CC 2015, After Effects CC Essential Training with Ian Robinson.

Just as good as Video Copilot – but not free – is Lynda.com, which has more up-to-date beginner resources and tons of materials from leading authors like Trish & Chris Meyer and Mark Christiansen (vfx book). You can try the website with a free 10-day pass. There are several competing websites with varying amount of relevant materials, like Digital Tutors (more) or Udemy (with After Effects Crash Course – Getting Started Lite Version, a 2-hour video guide to get started with After Effects). Here’s Ian Robinson from an essentials course with After Effects CC 2015: 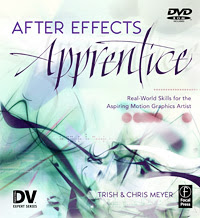 Chris & Trish Meyer have posted introductions from the DVD of After Effects Apprentice, a book designed for students and those who do not use After Effects full time, like video editors and web designers. The movies are an hour and a half of video tutorials that provide gentle introductions to major features inside After Effects, such as text and expressions. There’s a PDF for Lesson 1 of the book if you want to check out the best systematic written guide available. They also have many other free tutorials at Artbeats Tips and Artbeats video podcast, Pro Video Coalition (perhaps the best library of After Effects info available), and Lynda.com.

Classroom: After Effects CS5 video series by Adam Shaening-Pokrasso is an introductory course in Adobe After Effects CS5 that was recommended and outlined by Todd Kopriva, the current product manager for After Effects. Note that Todd’s detailed articles on each software release are essential to staying abreast of new features and fixes. And couple of years ago, Todd Kopriva and Video2brain provide a free video FAQ series to help you zip past common hurdles in just 20 minutes.

Andrew Devis’ After Effects Basics video series is just starting to age, but goes fairly well in-depth. There’s even an outline of this extensive series by Todd Kopriva.

Tuts+ paired down its After Effects offerings, but has a good library covering wide variety of topics and styles. Beginners will find help with AE lingo in What’s the Difference from Adam Everett Miller. They also have several inexpensive pay courses, including 30 Days to Learn Adobe After Effects with VinhSon Nguyen of Creative Dojo. And there’s a free 10-part in-depth series from Dave Scotland of cgswot.com, Welcome to After Effects. Here’s the intro:

In 2014, Mikey Borup alone blasted out at least 120 After Effects Tutorials w/ Mikey on his YouTube channel, plus additional tutorials and presets for other websites. He has 2 free playlists for beginners: AE Essentials: Getting Started with After Effects and After Effects Fundamentals Course. Here’s a recent example, Quick and Dirty Image Parallax:

Evan Abrams slowed his releases a little recently, but along with Mikey Borup, his YouTube channel helped buoy the AE tutorials scene in the last few years. Evan has an intro course on Skillshare, a website like Lynda.com An example of his other tutorials is Presets! (what’s the deal with those anyway?) (note that vignettes are easier now):

Mamoworld, makers of several important After Effects UI-based scripts, offers a free series of “Guru Lessons” that teach beginners all the basics needed to get started.

One of the advantages that After Effects has had over similar apps is broad industry support for 3rd-party effects plug-ins. Beginners won’t need anything extra since Adobe and licensees provide a ton of functionality. Still, there are shortcomings. Popular plug-ins include Trapcode Particular, Rowebyte Plexus, Red Giant Magic Bullet, Video Copilot Element 3D and Optical Flares, and big packages that attempt to cover every need on several platforms at once. To get a better idea about what plug-ins user think are important, see Toolfarm’s annual polls. Note that many plug-in vendors, particularly the ones mentioned, also provide industry leading video training for their products.

Like native plug-ins, After Effects scripts mostly have a UI, so there’s no scripting by the user. The best place to find scripts for After Effects is aescripts.com, which saw about 200 low-cost releases and updates in 2014. Just one example of these timesaving tools that run on the internal script engine is TypeMonkey by Ebberts + Zucker, which automatically generates kinetic typography.

Of course, there’s tons more of other free resources for those that want to continue on, although we can mention only a few right now: Motionworks (very useful new feature videos), Aharon Rabinowitz, Harry Frank, Premium Beat, Lester Banks, BakersTuts (and others on YouTube), School of Motion, Film Riot, Creative Dojo, Angie Taylor, Eran Stern, and Stu Maschwitz regularly post video tutorials (or articles about them).

And here on Pro Video Coalition, we have Chris & Trish Meyer, Chris Zwar, David Torno, Kevin P McAuliffe, Jeff Foster, After Effects Portal (70+ AE topic roundups), Mark Christiansen, and others posting all manner of tutorials and information on After Effects and allied applications.