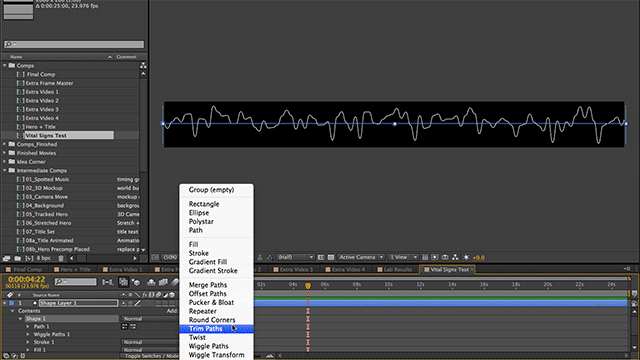 As we mentioned last week, we’re sharing the free movies from our latest video course that walks through creating an opening title (and more) for a medical-themed television special. As part of this, we wanted to create a series of vital signs traces to use as graphical elements in the background. However, we didn’t want to go through the trouble of tracing a real vital signs chart. In this movie, we show how to exploit the capabilities of After Effects’ under-used Shape Layers to create and animate similar-looking traces with minimal effort.

The process can be broken down into three broad steps:

The Wiggle Paths operator, by default, automatically animates the shape of the resulting path. This is fun, but doesn’t represent a typical vital signs trace where the line shape is static while a traveling window of it is revealed. That’s where the Trim Paths operator comes in. This procedure is demonstrated in the movie below:

One shortcoming of using Trim Paths with shape layers is that the start and end of the line is perfectly sharp. By contrast, a vital signs display often has a soft leading and particularly trailing edge, with a phosphorus radar-like decay. Enabling motion blur for the layer will help soften those edges (this is introduced later in the course); increase the Shutter Angle under the Advanced tab in Composition > Composition Settings to make the edges broader. Or, you can dispense with Trim Paths and instead animate a softly-feathered mask along the length of the line. To create differing amounts of feather on the leading and trailing edges, take advantage of the Variable Width Feather feature introduced in AE CS6. You might also get the effect you want using Echo or similar effects.

Lynda.com subscribers may view the entire course by clicking here. If you’re not already a Lynda.com subscriber, you can click here to start a free 7-day all-access trial; note that they will ask for your credit card up front in the event you like what you see and decide to continue with a regular subscription (they also do it to discourage content pirates from taking advantage of free trials – turns out that those who would steal content don’t like sharing their own credit card numbers…). Enjoy!