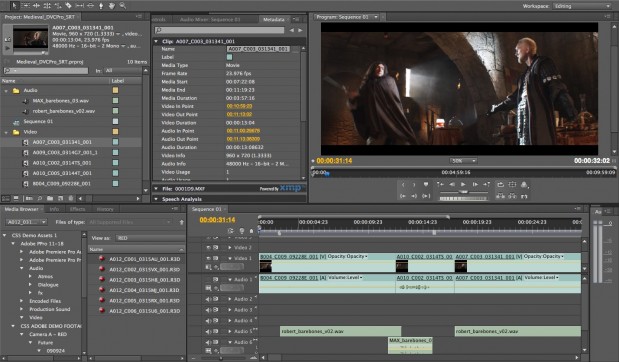 Video and film producers are migrating to tapeless HD workflows using powerful mobile and fixed workstations. Adobe’s Creative Suite Production Premium collection of tools, including After Effects, Photoshop and Premiere Pro, offers a complete, integrated production package. Its efficient, time saving, cross-product workflow, allows editors to work with HD in native formats with no need for intermediate rendering. But studios have been slow to fully embrace this powerful suite of tools. Until now.

Please help PVC by registering for the Dell Advisory Board.

Are you overlooking the champion?

If Adobe Premiere Pro was a politician, we’d say it had an image problem. Ask video producers what they think about Premiere Pro, and they often answer, “Not my first choice.”

But then ask the logical follow-up question, “When was the last time you used it?” Answers range from “About 10 years ago” to “Never.”

The thing is, Premiere Pro has quietly become more than a strong contender… for some pros, it’s the champion.

In 2003, it underwent a full code rewrite with a long-term goal in mind: create a non-linear editor that could smoothly handle any kind of video. In particular Adobe engineers designed Premiere Pro to work with video in native formats. Unlike other products such as Final Cut Pro (FCP), there would be no need to transcode or “wrap” video to make it editable. In addition, Adobe began to upgrade the Production Premium suite to ensure its products worked seamlessly together to create a fast-paced, hitch-free workflow.

Other features in CS5 further upped the ante. Premiere Pro CS5 runs only on 64-bit systems, has an updated playback engine that provides smooth playback and scrubbing of multi-layer native HD footage directly from the timeline, and offers GPU accelerated video effects. These improvements allow for real-time playback with no rendering needed.

To get that kind of performance users need to step up to higher-end, fully configured PCs such as the Dell Precision T3500 fixed workstation or the Dell Precision M6500 mobile workstation, equipped with at least 12 GB of RAM (32 GB ensures memory will be a non-issue) and at least a quad core CPU with hyperthreading. To use GPU accelerated effects PCs must have an Adobe certified video card. (http://www.adobe.com/products/premiere/systemreqs/)

With that hardware in place, the production workflow takes on a different feel. For example, Nelson Madison Films (http://www.nelsonmadisonfilms.com/), producers of the indie film “Delivered,” switched from Avid to CS5. They wanted to go completely tapeless using a RED Digital Cinema 4K camera… something their Avid system could not do. With Premiere Pro, they applied GPU accelerated color correction directly to multiple layers of RED r3d clips and played them back in real time from the timeline.

It’s a similar story for Big Screen Entertainment Group, makers of “Sucker” (a sci-fi, comic-book style film). They switched from Avid and FCP to CS5 to take advantage of the streamlined RED workflow. With FCP, they had to down-convert footage to QuickTime ProRes, whereas with Premiere Pro, they could edit RED files natively.

Event videographers are taking advantage of the speed Premiere Pro affords them. Edit1media, a high-end wedding videography firm, does same-day, on-site editing using Premiere Pro’s DSLR support for Canon 5D cameras. They are able to playback their edited wedding videos at the reception. In addition, in only a matter of a few minutes, they can go from the Premiere Pro timeline to a Blu-ray disc, with no intermediate transcoding, via dynamic linking with Adobe Encore.

The CS5 collection offers one other compelling production aid: Photoshop. This ubiquitous, image editing and video production tool becomes even more useful when combined with other products in the CS5.

For instance, all Encore menus are layered Photoshop files. Select a DVD menu in Encore, click a button and that menu opens in Photoshop. Make changes, choose Save, Alt-Tab back to Encore, and those changes instantly show up in the Menu panel. Don’t like how things turned out? Click another button to undo the Photoshop edits.

One strength of After Effects is animated masks. It’s a simple matter to open a still image, graphic or video frame in Photoshop, make a selection, convert the selection to a path, and copy/paste that path to any layer in After Effects. Then use Mask Path keyframes to animate that path’s shape, size and position.

That Photoshop to After Effects workflow was at the core of the independent sci-fi “road” film, “Monsters“. Its producer used Photoshop to edit still images (mostly signs), to give them different text and a grungy look. He then he used After Effects to insert the images into dozens of scenes. And he edited the entire film in Premiere Pro, relying on Dynamic Link to connect his sequences with After Effects.

Anyone who still thinks Premiere Pro is “kid stuff” hasn’t tried it lately. Combined with the powerful tools in Adobe CS5 Production Premium or Master Collection along with properly configured Dell Precision workstations, Premiere Pro is fast becoming the non-linear editor of choice for video and film producers.