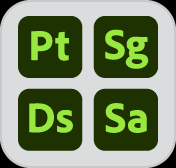 Adobe just announced the Substance 3D Collection, a new suite of 3D design tools centered around the Substance software they acquired in 2019 along with its parent company, Allegorithmic. At the time there was plenty of head scratching, with people wondering what Adobe wanted with a product that created surface materials for 3D models when their Creative Cloud lacked any kind of 3D tool that could take full advantage of them. Today’s announcement answers that question, at least in part.

The Substance 3D Collection is Adobe’s first step towards an end-to-end 3D content authoring solution. Up until now 3D in Adobe’s ecosystem has been limited to simple product shots in Dimension, card-based motion graphics work in After Effects, and a lesser-known 3D render and manipulation tool inside of Photoshop. 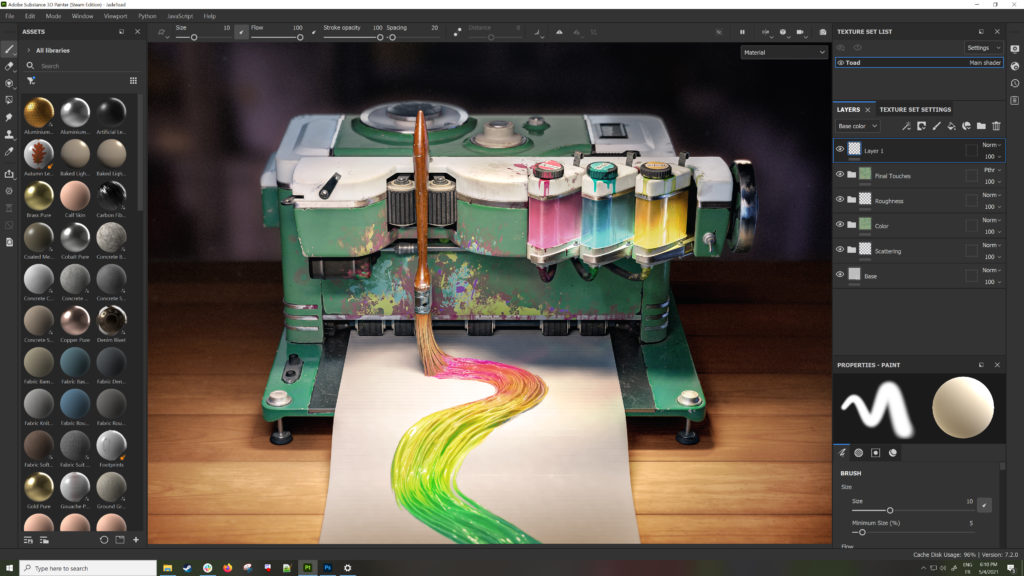 Let’s cut to the chase: the Substance collection isn’t yet a complete replacement for the likes of Maya or Blender, nor is it meant to be. Its primary focus is clearly on reducing the technical complexity of 3D design, making the tools accessible to graphic designers who don’t want to become computer scientists just to use the software. And while it’s not a comprehensive solution yet (Adobe has announced a private beta of a Substance 3D modeler tool for the collection), the dev team have clearly been busy to have developed as much as they have since the Allegorithmic acquisition in early 2019.

In this first incarnation there’s a strong focus on virtual product photography. The collection doesn’t yet provide animation tools, but it does provide drag-and-drop simplicity for the creation of product shots. Various HDR studio lighting environments are included with the software to immediately create hero looks for products.

Let’s take a look at the various “components” of Substance 3D Collection and what they offer.

Stager is exactly what its name suggests: a place to position and lay out your products, lights, and cameras for final product photography. It’s also the core piece of product news here; the other members of the collection—Painter, Designer, and Sampler—all existed as shipping products prior to today’s announcement. (Sampler was renamed from its original moniker, “Alchemist.”)

Stager expands on the Adobe Dimension philosophy of simple, “Adobe-style” setup of 3D objects. In fact, Stager apparently is built leveraging the Dimension code base. (Dimension remains a separate product, available as part of the Creative Cloud suite.) It includes some nice layout features like automatic physics collisions. This means that objects will snap to other surfaces (think books collapsing on a desk, rather than passing through it), solving one of the most frustrating aspects of scene assembly for newcomers to 3D. It remains to be seen how accurate that feature is—Unreal Engine and Houdini both have similar layout features and both suffer from convex collision hull approximations. Regardless, it’s a feature that will work flawlessly with the inherent symmetry in most product shots. 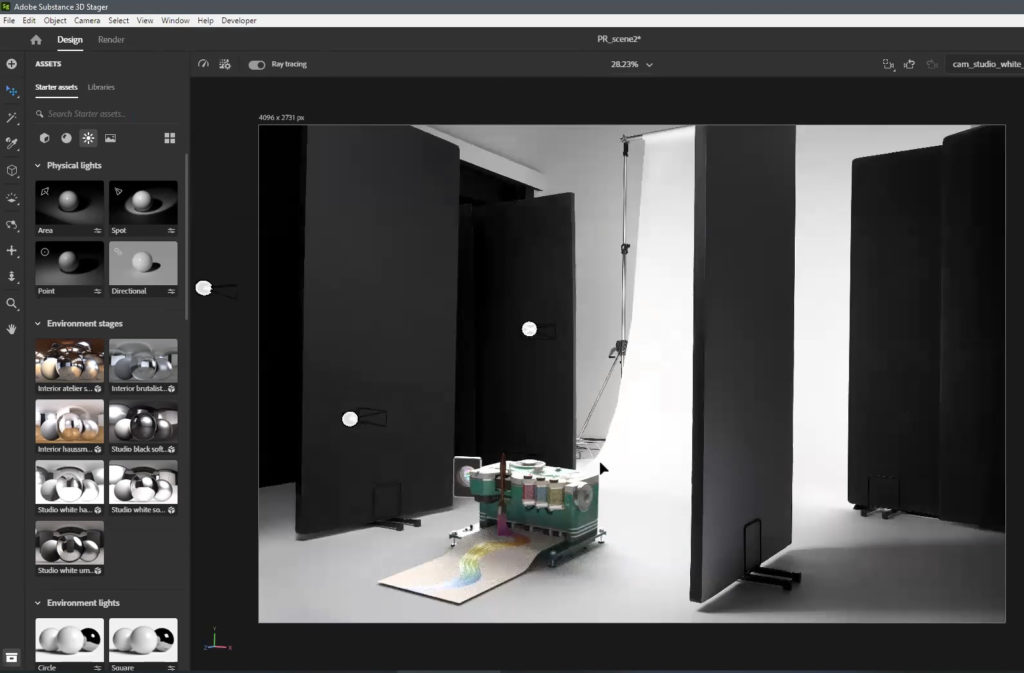 Stager provides an interactive physically based renderer to provide instant feedback for scene changes, and access to models from the Substance 3D Asset Library 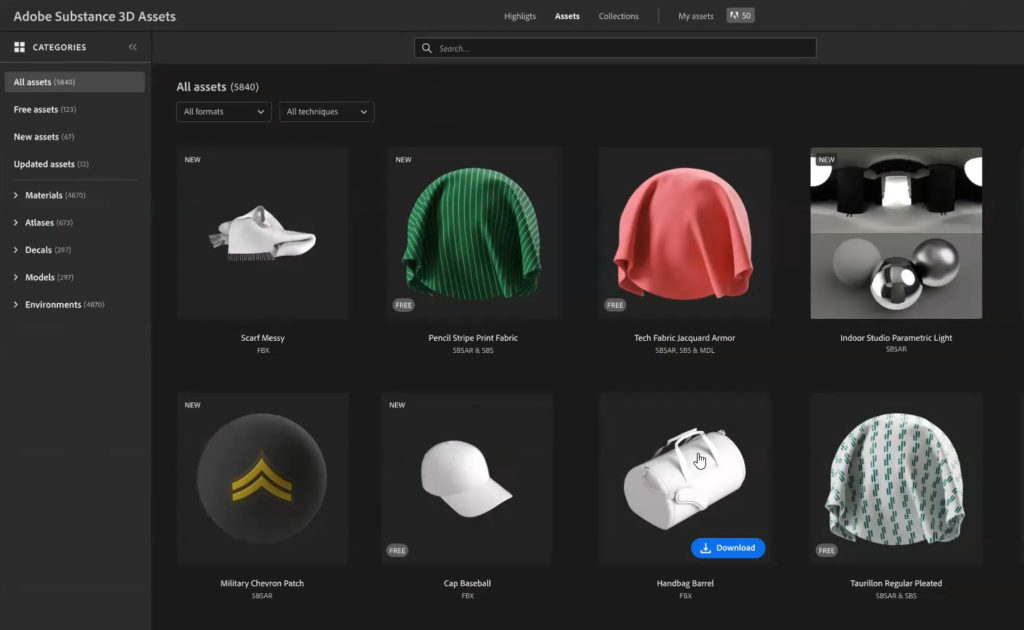 This is probably the other big piece of “new” news. Substance has for some time included a library of pre-made materials, but with the release of Substance 3D Collection, Adobe has taken a page out of the Quixel Megascan playbook and included thousands of 3D models for users to access and add to their scene. So if your cereal box hero product needs to sit atop a breakfast table, you can drag and drop said table from the asset library, apply the desired material, and click render.

Adobe has rightly identified models as being one of the critical issues for modern 3D creation. Even once the Substance modeler emerges from beta, creating a single quality model can take several days. Most commercial artists can’t afford that time or expense if they need dozens of objects in their shot. By providing thousands of generic items, Adobe allows artists to focus on the model that counts: their client’s hero product.

Formerly Substance Alchemist, Sampler allows an artist to take photographs of real-world textures with their phone and instantly turn them into Substance materials, thanks to the magic of machine learning. The results for common textures like wood and stone are pretty impressive, and orders of magnitude faster than traditional material creation techniques. 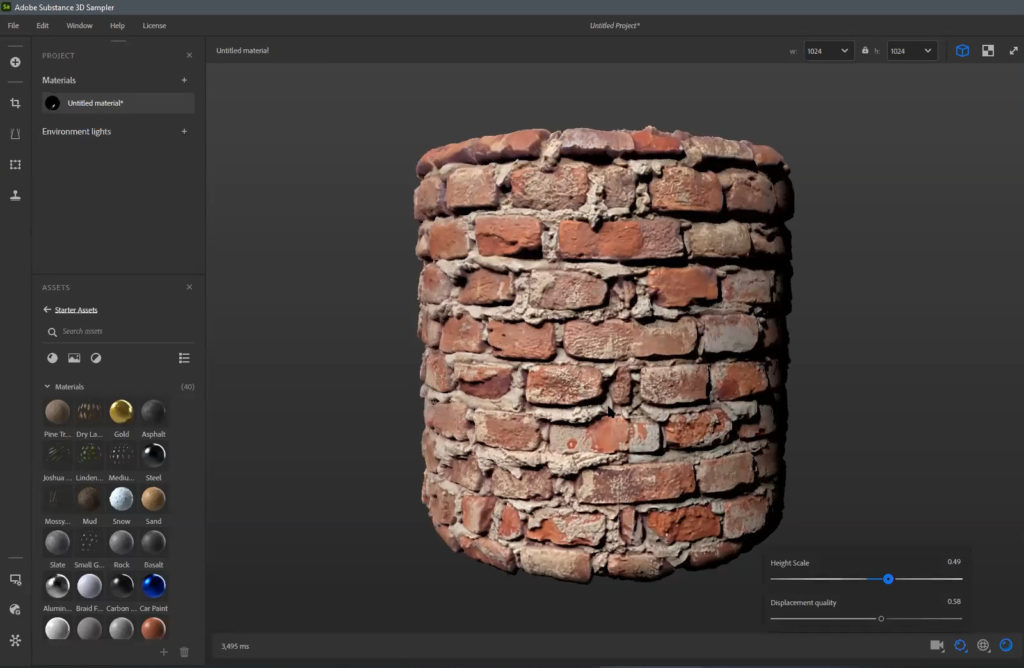 Speaking of material creation, Designer has always been the Substance flagship product, allowing artists to create very detailed surfaces. While there are simple tweaks that can be done here, be warned: this app is where the warm, fuzzy Adobe UI features start to move into the more technical world of nodes and math operations. And for good reason: Substance Designer is the industry standard tool in VFX, Games, and Animation for creating believable surface materials. So it’s not surprising that the technical complexity exists there. The good news is that the asset library contains enough preset textures that the average artist may rarely need to step into the world of custom node-based design, and can rather focus on Designer’s ability to apply the materials to objects and add real-world dirt and scuff marks where needed.

Painter rounds out the toolset, allowing artists to paint directly onto the 3D surface of the object. Brushon specific patterns, surface artifacts like scratches and cracks, or even paint on logos and other decals.

We don’t know too much about this yet, except that it’s a VR-based tool. (Time to plonk down the $300 for an Oculus Quest 2.) Given that Adobe acquired the VR sculpting tool Medium from Oculus at the end of 2019, I have to assume it will be some variation on that tool, or possibly even a rebranded update to Medium itself.

Now to the sobering news for some of you dreamers out there: Substance 3D Collection will not be included as part of Creative Cloud. It’s a separate subscription.

The Collection is available for a monthly rental of $49.99 a month (I’m not sure whether this requires an annual commitment-stay tuned for clarification), or $549.88 a year. Team pricing is $99.99, or $1,199.88 respectively. An “early bird” discount is available for new subscribers signing up between now and the end of the year.

For “traditional” users of Substance looking only for the texturing tools, there’s a “Substance 3D Texturing” monthly subscription of $19.99 per month, or a discounted annual rental of $219.88.

Link to the official press release