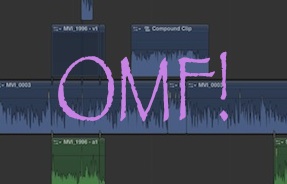 We all know that Final Cut Pro X doesn’t yet support import / export of XML data. And there’s no OMF export out of the box either. Automatic Duck is offering OMF export via their Pro Export FCP. As a test I exported a short OMF sequence out of FCPX and into Adobe Audition. Someone was asking about what the tracks looked like in the end. This was that result.

First let me say that I don’t have any real commentary here nor did I have time to really dig into the exact results of this test. All I wanted to do was see if it would really work since, according to Apple, translating FCPX’s trackless magnetic timelines out of FCPX into anything else isn’t really all that and/or easily possible. My thought has been that even though FCPX’s timeline is trackless the clips are still laid out in a similar manner to a tracked timeline only much more haphazardly. So there has to be some way to move the data in and out.

For this test I tossed in a few interview clips, those are MVI_0003, 1480 and 0004. Then I added some b-roll. For the MVI_1996 clip I detached the audio and video. I also dragged a piece of audio up ABOVE the video. Finally I made a Compound Clip to see if that came across. This is that timeline:

To see this image larger then check out the full size on Flickr.

Even thought the Automatic Duck site mentions OMF to Pro Tools with their tool OMF isn’t a Pro Tools specific thing. Since I don’t have Pro Tools I imported the OMF into Adobe Audition. Keep in mind that at this point in time there’s no way to specifically assign tracks to any kind of destination in FCPX. This was the result in Adobe Audition: 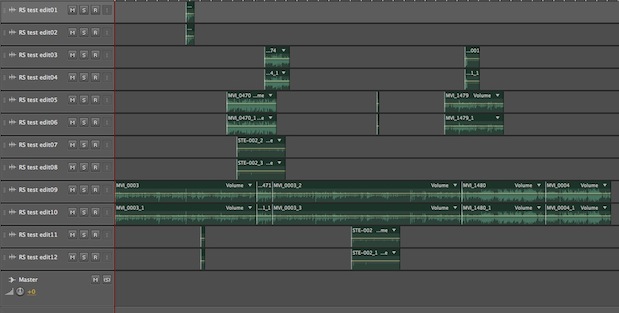 Here’s a larger version of that image on Flickr.

As an ironic side note, I tried this same OMF import into Soundtrack Pro and all it did was come up with a blank timeline.