Problems encountered in the process of preserving our video past

We had a project come to us recently that required the transfer of ¾ inch videotape to digital files. To those for whom analog videotapes have become a mysterious relic akin to Egyptian hieroglyphs, let it be known that much of our cultural heritage still exists only on this medium.

The equipment used to retrieve it is quickly wearing out and replacement parts and the expertise to operate and repair said equipment is also becoming harder to find with each passing day. 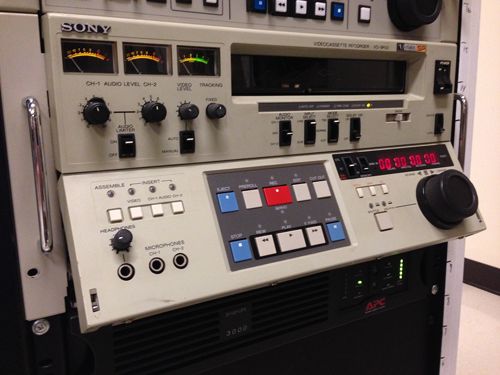 The Sony VO9850 3/4 inch UMatic tape deck in the Digital Media & Technology machine room of the USC School of Cinematic Arts used for the transfers described in the text.  The S-Video output was connected to an external time base corrector, converted to SD-SDI digital and recorded as ProRes 422 files using an AJA KiPro Rack.  This deck was manufactured by Sony circa 1989.

Luckily, just as there are folks painstakingly restoring nitrate motion picture film before it dissolves to powder, there are archivists who realize the value vintage television material has to human cultural history and are rushing to get early video programs produced on fading technology transferred to 21st century media.

But in many cases inconsistent storage conditions are what cause these archivists to lose sleep at night.  Storage under any but ideal conditions can lead to major problems when attempts are made to move recordings off tape and onto a digital medium.  It goes without saying tapes should be kept clean.  Just like dirt and dust is an enemy of film it also can be detrimental to tape as well.  Whether it is stored on its side or upright can even be a factor.

In addition, the media itself is breaking down.  Not like nitrate film, but with the same result – the media can be rendered unrecoverable. 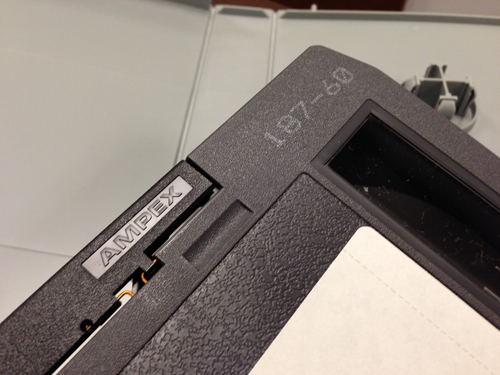 The videotapes we were tasked with transferring were made in 1996.  Just like so many tapes of years gone by, their storage history is unknown.  Had they been stored under ideal conditions there may not have been any need for extra attention.  While opinions differ slightly, the National Media Laboratory model for ideal conditions for magnetic tape is a constant 68 degrees at 30% relative humidity for long term storage.  Even then, there are still no guarantees.

Our tapes could have been squirreled away in a storage unit, garage, basement or attic.  We don’t know. Media thought to be lost turns up anywhere and everywhere.  The recording made of Super Bowl I is a perfect example.  When the game between the Green Bay Packers and the Kansas City Chiefs was played on January 15th, 1967, the national holiday aura the game has taken on over the years didn’t exist.  The game was the only Super Bowl that wasn’t a sellout.  In fact, it wasn’t even called the Super Bowl at the time.  It was called the AFL-NFL World Championship Game.  The Super Bowl name was given to the first couple of games retroactively.

No recording of the game was known to exist.  While the broadcast had good ratings, it was just another sports broadcast.  Along with morning and daytime shows, sporting events were not thought to be worth preserving.  Both CBS and NBC televised the game live (a unique story in itself), but neither network kept a copy, opting instead to take advantage of videotape’s reusability by recording other programs over the game recording.   Home video recording did not yet exist, so the only way a copy could have been made was at a television station or production facility.

Cut to the summer of 2005 when Sports Illustrated magazine named the missing Super Bowl broadcast one of the “lost treasures” of sports.  As the Wall Street Journal tells it, apparently from out of nowhere, an attorney approached the Paley Center for Media in New York City.  He brought forth a shopping bag containing two-inch quadruplex recordings made by the father of his client who at the time was an employee at a local television station in Pennsylvania.  The tapes had just been discovered after being stored in an attic for thirty-eight years.

We placed one of our 1996 tapes into our legacy ¾ inch Umatic deck and hit play.  The first indication there was a problem was erratic behavior of the timecode.  Then, very quickly, we heard a squeal from inside the machine as if the machine was pulling hard on the tape to get from the feed side to the take up side.  Upon closer inspection, the tape was indeed struggling.

Tapes that exhibit this kind of behavior should immediately by stopped and taken out of the machine and the tape path cleaned before another tape is attempted.

The questionable tape was exhibiting signs of binder breakdown.

Magnetic tape is made up of layers.  In simple terms, a layer of magnetic particles is attached with an adhesive (called the binder) to a backing of polymer (DuPont Mylar™ in the case of video tape since the mid-sixties).  When the tape is originally recorded, it passes over the recording heads and the magnetic particles are organized into an arrangement that can be reproduced later by the playback heads.

Tape not stored under optimum conditions (cited above) can go through a chemical process called hydrolysis.  The binder holding the magnetic particles to the polymer backing could absorb water from the air and become soft.  It’s not unlike a bag of potato chips being left open on a humid day.

Any attempt to play a tape suffering from binder degradation results in head clogging and increasing tension on the tape path and, in turn, causes the squealing sound.  Continuing to try to play these tapes will ultimately cause permanent damage to the tape and clog the tape path of the playback machine.

Fortunately, most tapes suffering from binder breakdown can be restored long enough to be transferred to current media.

This is where the baking comes in.

Once we determined what tapes were in need of special attention, we contacted several vendors who do tape restoration.  We settled on Penguin Recording, specialists in archival and re-issue recordings.  Penguin’s owner, John Struther is a recording engineer with thirty-five years of experience providing services to major artists, groups, individuals and recording labels.  Working with master tapes from decades past and virtually every brand and formula of source media, John deals with tape baking on nearly a daily basis.

When asked if he could help us with our videotape problem, John said yes,   “baking works equally well with videotape and audiotape.”

Our tapes were baked at a constant 125 degrees in a Blue M laboratory-grade environmental test chamber for several hours.  Once baked, the tapes could be considered stabilized for at least one week.

Later, I talked with John Struther about the process and how it came to be.  He said binder breakdown began to show up in the early eighties as a result of changes to the tape manufacturing process.

A chemist from a major tape producer told John the root of the issue began in the early seventies when manufacturers were attempting to get more flexible tape for video and audio use.  To do so they used chemical additives in the manufacturing process.  Over time, those additives began to absorb moisture.  Slowly, the hydrolysis slowly takes place.  It can be accelerated by inappropriate storage conditions as described earlier.

It was only through trial and error by manufacturers and engineers like John they were able to come up with a solution that works most of the time.  That said, he indicates from his experience, treatment for older tapes can be like “shifting sands.”

He has had tapes stored under very controlled conditions turn up with the same problems as those we experienced with our ¾ inch videotapes.  Also, there are those that imply tapes are good for several weeks contrary to John’s own experience where tapes are only dependable for about a week.   He also has been in situations where a tape must be baked more than once.  Worse, he says, there may come a time for these older tapes when baking may no longer work at all.

This article concentrates on videotape restoration.  In the audiotape world, the problems are more widespread.  There are ongoing discussions on the Internet as to how best to deal with other problems older tapes present.  For instance, acetate based tape cannot be baked and can suffer from “vinegar syndrome.”

Richard Hess, an active audio restorer, advocates a cold treatment or “wiping” for some models of audiotapes.  Hess provides a list on the Internet of degrading audiotapes by model number and how that model reacts to the various treatments available for aging tapes.

Back in our facility, we put our “baked” problem tapes back into our tape deck and played them without incident. They exhibited no adverse effects from the baking process.  Video was free of tearing, the audio was clean and time code was smooth and consistent.

The problems of videotape restoration rival those of film restoration.  The Library of Congress is doing as much as it can under a mandate from the U.S. Congress to transfer thousands of hours of videotape.  Unfortunately, it is also under funded.  Fortunately, there are post production houses and individuals working out of their homes picking up some of slack to make sure some of the relics from the early day’s of television are available to future generations.