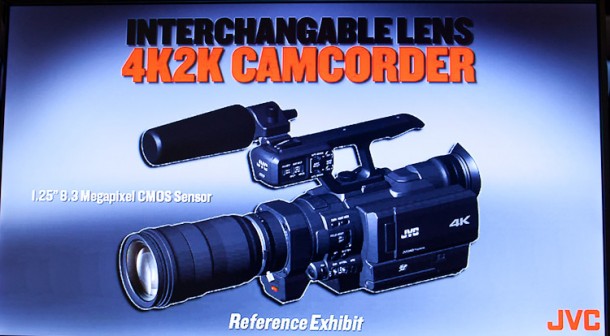 At CES JVC officially launched the GY-HMQ10 which is said to be the world’s first handheld 4K camera. A walk through the JVC booth also yielded a further surprise though, tucked away in a corner, behind glass was another 4K camera but this one had a Nikon F-Mount. This is the first time the camera has been shown in public and whilst it’s very much a work in progress , the interchangeable lenses and larger sensor than the HMQ10 make this look like a very interesting proposition with a possible price point of $10,000. I took a few minutes to talk with Craig Yanagi from JVC about both of these cameras. 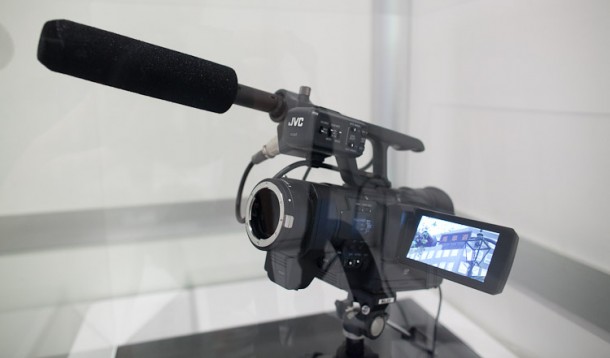 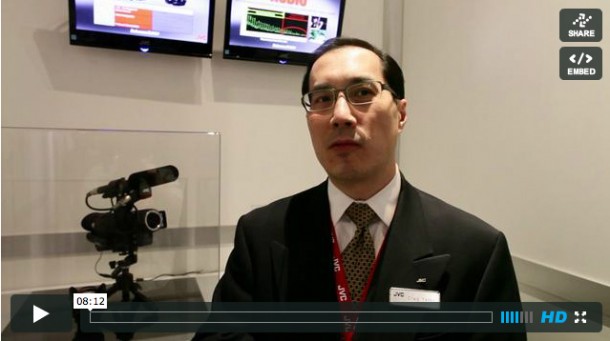 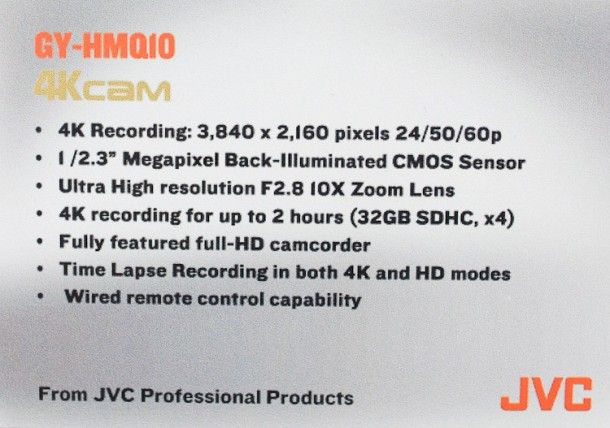 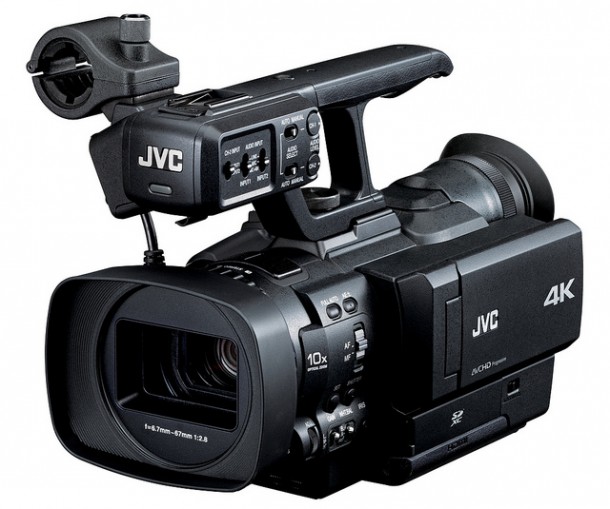 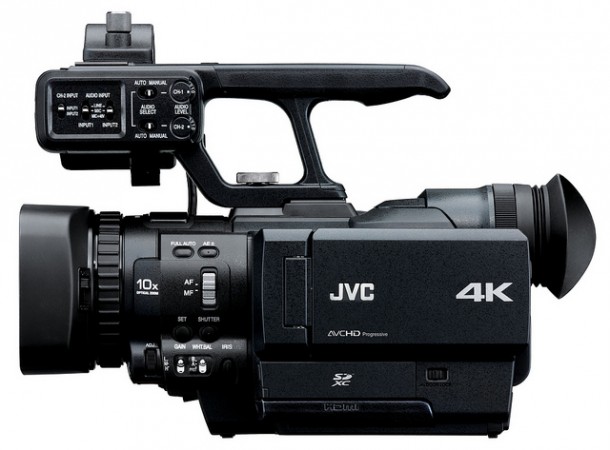 “We’re witnessing the birth of what is destined to become a broad market for full 4K end-to-end production,” said Edgar Shane, general manager of engineering. “The GY-HMQ10 is a breakthrough product that opens up 4K imaging to users who previously wouldn’t have considered it.”

High resolution 4K still picture imaging has been around for several years in DSLR cameras. Motion video capture with these cameras has always been done at a lower video resolution because of lack of processing power. Likewise, high end digital motion picture cameras may capture 4K images, but often provide a raw data output to an external storage array for later processing-again due to lack of processing power in the camera. There just hasn’t been the ability to capture, process, display and record full 4K images in real time until now.

JVC’s exclusive Falconbrid LSI processing takes raw image data from the camera’s CMOS device and dematrixes (deBayers) it in real time. Unlike many high end 4K cameras, the GY-HMQ10 is able to output 4K images to a monitor or projection system in real time with virtually no latency. This capability opens up applications in cinematography, medical microscopy, telepresence, specialized observation / surveillance, and live wide-view event coverage.

Using MPEG-4 technology and a variable bit rate H.264 codec operating at up to 144 Mbps, the GY-HMQ10 records up to two hours of 4K video to economical SDHC or SDXC memory cards.

In addition to 4K imaging, the GY-HMQ10 also captures and records astonishing 1080i or 1080/60p full HD, with extraordinary detail provided by its 8.3 megapixel imager and superior lens. HD is recorded on a single memory card in a format compatible with most editing systems. This combination of superb 4K and HD imaging was requested by attendees of JVC’s 4K forums, conducted throughout North America last year, and is unique in the camera industry.

Another feature requested by forum attendees was the ability to crop an HD image from a 4K frame. This can be accomplished in post production, or in real time during camera playback. The “trimming” feature makes HD cropping easy using the camera’s touch panel LCD monitor.

Similar in size to JVC’s popular GY-HM150 ProHD camcorder, the GY-HMQ10 includes a build-in F2.8 10x zoom lens with optical image stabilizer, as well as a color viewfinder and 3.5-inch touch LCD monitor with a new, intuitive user interface. The GY-HMQ10 is built in a familiar, comfortable and lightweight form factor for hours of field production with minimum fatigue.

The GY-HMQ10 is equipped with manual level controls for audio, with audio metering in the LCD and viewfinder displays. A microphone holder and two balanced XLR connectors with phantom power are located on the handle. The camera is equipped with a built-in stereo mic for ambient sound pickup.

Other features include JVC’s patented Focus Assist, as well as manual and auto control of focus, iris, gain, shutter, gamma, color matrix, and white balance. Plus, the camera has the unusual capability of live 4K output via four HDMI terminals.

“Historically, JVC has been a leader in camcorder and display technology, and the GY-HMQ10 is our latest breakthrough,” added Shane. “It’s part of a larger move at JVC to bring 4K technology to a wide range of customers.” In September 2011, JVC introduced an affordable line of 4K projectors to the home theater market. The company’s high-end 4K projectors are widely used in commercial flight simulators and planetariums. “4K is the logical step beyond HD,” said Shane. “And JVC is uniquely positioned to lead the industry in this new direction.”

JVC’s innovative approach to professional 4K will be unveiled in a series of industry announcements beginning at CES and continuing throughout 2012.

At a retail selling price of $4,995, the GY-HMQ10 launches today, with market deliveries beginning in March, 2012.