When a television program wins an Emmy award for Outstanding Graphic Design and Art Direction, it must be something special. World War II from Space, a program commissioned by HISTORY, is a stunning 90-minute documentary visualizing key events from World War II from the vantage point of space. This was a huge creative endeavor with 300 animations and 79 VFX shots—all completed over the course of one and a half years by U.K. production company October Films and visual effects studio Prime Focus. Simon George wrote and directed the film, while Prime Focus created the VFX, led by Design and Animation Director Hazel Baird, and Creative Director Simon Clarke. We had a chance to sit down with George, Baird, and Clarke to discuss how the video tools in Adobe Creative Cloud, allowed them to create their own bird's eye view.

Adobe: How was World War II from Space different from other projects for Prime Focus?
Clarke: It was the first time that a show like this was created only using visual effects. The only live action is the interviews. Prime Focus engaged with October Films to co-direct, in a way. We wanted to make learning about World War II much more appealing to younger audiences, more exciting than black and white film images. We asked ourselves how we could get a new generation interested, while still layering in the amazing information we had from our faithful historians. Ultimately, we created 78 minutes of pure CG content for a 90 minute program.

Adobe: Can you tell us a little more about what makes World War II from Space special?
George: We were recounting the battles and shifting tides of the war from a bird’s eye view, so there was enormous reliance on animations and VFX to tell the story. We had to rely on globe-spanning maps and highly detailed computer animations to recreate events from Pearl Harbor to the atomic bomb. We wanted to create a new style that would be relevant for all ages and that would be visceral, informative and visually stunning. 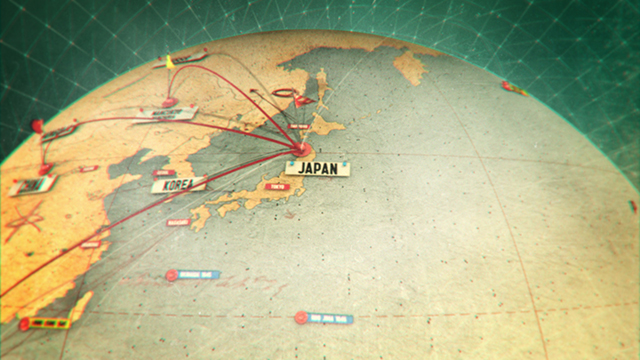 Adobe: With so many VFX shots and animations over 90 minutes, what were your biggest personal challenges as a filmmaker?
George: I really liked the idea of telling the story from space, because it was such a grand concept that had never been attempted before but so many things in World War II were occurring simultaneously, and each influenced the other. There was also massive global geopolitical wrangling and the only way that can be captured in a visually stunning and meaningful way is from space. But I have to say as I started, I didn’t know if it was a good idea. Nine months into storyboarding, drawing, and designing, I still had some doubt: could we make it work? As a filmmaker, it is difficult to think of an idea that is so enormous. When you are shooting a drama, you have finite resources. Yet when you are building everything in CGI, anything is possible. Our biggest challenge was how to rein the show in, yet make it exciting.

Adobe: How did you stay organized with so much going on?
George: The hub we used to stay in sync was a combination of Adobe Story and Adobe Premiere Pro. The last thing I wanted was a bunch of different drafts of the script flying around, so I used Adobe Story for writing. Once I made changes, they were instantly reflected online so the producers, editors, and designers could see where my head was at in an instant. Then I had all the interviews with people like Pulitzer prize-winning historian David Kennedy transcribed and brought into Adobe Story. Everything could be shared instantly. We married the transcoded text with images and grabbed bits we needed using metadata and put them onto the Premiere Pro timeline. 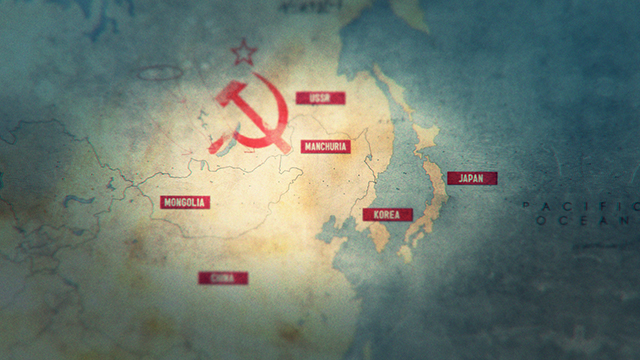 Adobe: How did you actually capture the interviews with all of these top historians and military brass?
George: We had to be pretty methodical to keep everything organized. We flew to The Pentagon, San Francisco, and to a variety of places to interview leading historians. We shot the interviews on ARRI ALEXA cameras in ProRes, so the project was pretty large. Then we came back and got the files transcribed. We imported clips into Premiere Pro and put clip numbers on the text in Adobe Story. So rather than doing cuts on paper, we cut them together in Premiere Pro on screen, live. The integration between Adobe tools saved a massive amount of time. We could even type in a word and locate that particular text and put a clip in, literally saving days. That’s the challenge with documentaries: there is so much material to keep organized. We had the concept down, but we started seeing how it would really come together once we started cutting everything together in Premiere Pro. We would even block things out as rough storyboards, such as the Pearl Harbor attack, scan them into Premiere Pro to see how it was working and get a good idea of how to move forward.

Adobe: Tell us more about the actual design process?
Baird: I started off creating mood boards to show the different design approaches we could do. Once I had an understanding of where to go I started designing the look of the different styles (lenses). There were about six, Tech lens (UI Graphics), Pop Culture, Graphic lens etc. But because of the varying lenses I was worried that it could look a bit mismatched so I came up with a grid that is present in all the animations that ties them together. I used After Effects to create my storyboard images. I prefer using After Effects so I already understand how the elements are going to move. I have worked like that for years and like that approach. 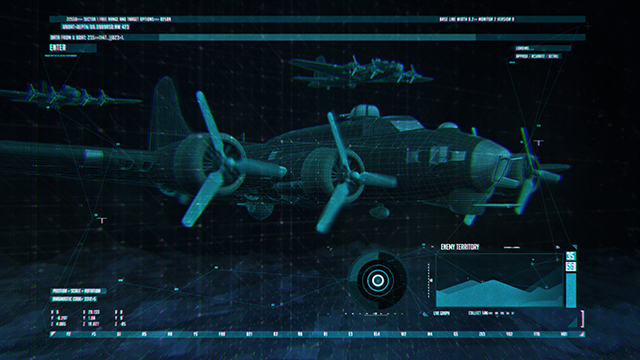 Adobe: What were you responsible for, working with the team at Prime Focus?
Baird:  I was responsible for all the animations. For example, the six styles (lenses) were created in After Effects. Our team at Prime Focus would get the written notes from Simon George detailing what needs to happen in that scene (battle scenes, maps, etc.) and then we would use one of the styles to bring it to life visually in After Effects. If there were mock ups of old documents we would create these in Photoshop and then bring it into After Effects to animate.

We worked a lot of the more complex sequences out using a combination of CINEMA 4D and After Effects. The integration between these two programs is fantastic for speeding up the workflow. Every time there was a text shot, we would design it in 3D. We also did a lot of the post-production in After Effects to simulate atmospheric conditions and made a lot of particle fields.

Adobe: What were some of your favorite scene elements?
Baird: I loved doing the title sequence, as well as the scenes where I had to mock up documents to look like blueprints. I researched 1940s documents and maps from the War Museum in London to get a sense of the style back then. We often dirtied the images in Photoshop and then brought them into After Effects. The tech lenses looked great too; it really helped bring certain scenes to life. The photographs where we used parallax to give depth came out brilliantly and we used a combination of After Effects and Fusion (VFX) to create this effect. We were proud of how they looked on screen. 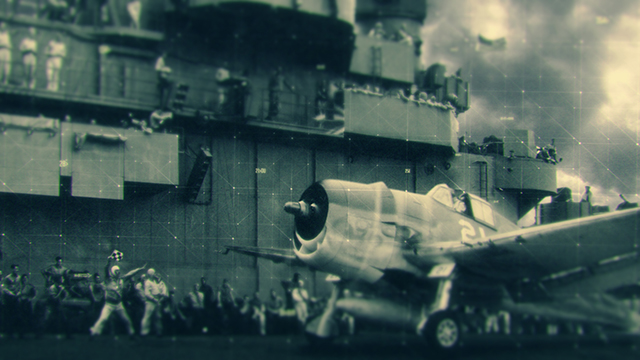 Adobe: When did you start believing that the whole concept of using an orbital view of events would work?
George: We had the design down but also had the first six minutes of the film working, and we recognized that the look was exciting and visually stunning. We showed it to HISTORY and they were very excited with the results. But then when they wanted to roll with it, we started to feel a lot of pressure to move quickly, so we had to stay focused and work long hours. Every time something was finished, we put it back into Premiere Pro, so we didn’t have miscellaneous files disseminated all over the place.

Adobe: How was the film finished?
Baird: The initial coloring we did for most of the animations in After Effects didn't change much. We then brought all the shots into Premiere Pro and made any last tweaks. After that, we did a three-day color grade in Baselight to balance everything out and create a slightly darker grown up feel. We finished 80 shots that required a ton of motion tracking in eight months. We had a lot of image volume to work through. It was a little grueling, with long days and late nights, but it was also very rewarding. 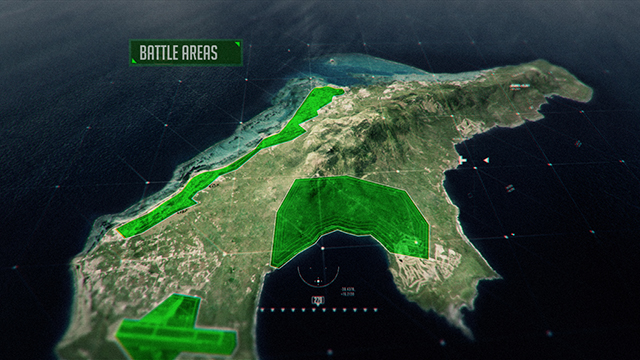 Adobe: Would you do this again?
George: This project has been quite a learning journey, in terms of telling a huge story in a way that brings all the visual conventions and imagery of modern war reporting to World War II. But I think it really gave viewers a fresh interpretation of the war. Telling almost everything graphically is so freeing and exciting. Yes, I would do a project like this again. The process was fascinating and we’re happy with the end result.

Clarke: As a result of the success of World War II from Space, we’ve been talking about creating other types of shows like this with October Films. It has opened the eyes of other commissioners and broadcasters. These types of projects have always had a very stereotyped format, and now there’s an appetite to try to push the visual aesthetic to a whole new level.  There is a whole new generation to expose to the history of their fathers and grandfathers. From a social point of view, it's quite important.  We’re translating the legacy to a new audience in a visceral and powerful way that enables them to engage with it. It is important for us to keep pace with the audience’s level of expectation, so the stories can survive and be passed on to a new generation.