Every post production house in the world that runs Windows machines probably has a copy of QuickTime Pro for Windows on it.  It’s pretty much our “go to” application for just about every file we import/link to in our edit systems.  I use it daily to check files, add and delete audio channels, and even to transcode to other codecs.  Whether you’re running the Creative Cloud, or Media Composer on Windows, QuickTime is the foundation of your workflow.  If I had to guess, there would have to be hundreds of thousands of copies of QuickTime Pro 7 in the wild that Apple could essentially use to “print money”, as if they were to update it to QTP8 with guaranteed patches coming down the line, and add new functionality to it, everyone who owns a copy would buy it.  The Creative Cloud and Avid’s Media Composer rely on QuickTime to function properly, so why would Apple give up the chance to make a ton of cash by updating it?  Because Apple does what Apple wants to do, and what’s good for business, and Apple has it’s hands in a ton a pies (Phones, Watches, iTunes, etc), and QuickTime isn’t one of those pies anymore.  So now what?

Well, shortly after support was discontinued for QuickTime 7 for Windows, the United States Computer Emergency Readiness Team (yes, this really exists) or US-CERT, as it’s also known, announced that the Zero Day Initiative has issued advisories for two (1, 2) vulnerabilities found in QuickTime for Windows, basically stating that any Windows machine running QT7 is vulnerable for a cyber attack.  So, as users ran screaming to their computers to uninstall QT7, Adobe and Avid announced that they were working on updates to support a “QuickTime-less” version of their editing and compositing applications, as codecs like ProRes are still dependent on QT being installed on the system attempting to decode them.  Well, around the end of May, Adobe had announced that they have received “certification of our new native technology for our Creative Cloud applications”.  Basically they had updated Premiere Pro internally to remove the need for QuickTime/QT Pro to be running on systems utilizing the Creative Cloud.  Premiere Pro would support codecs like ProRes natively.  Now, keep in mind that Adobe had also stated that “we do anticipate that some older, less used legacy formats may not be directly supported and therefore no longer be accessible. Users may need to find a method of transcoding their legacy media.”  Which, in the grand scheme of things is not that big a deal, as there are many situations these days, where we find ourselves transcoding files to have them work better in our NLE.  Also, Adobe had stated that “we are planning on adding native export support to .mov wrapped files of DNxHD and DNxHR. This shows our commitment to the DNxHD/DNxHR codecs. This support augments our currently supported import of DNxHD and DNxHR in .mov and .mxf and native export in .mxf. Similarly, in an effort to allow as many legacy files to be supported as possible we will also be supporting the reading of AAC Audio and PNG Compressed frames and the reading/writing of Animation frames”.  Now, as of the publishing of  this article, if you have updated to the new Premiere Pro CC 2015.3 update (June 2016 update), you can uninstall QuickTime Pro, and Premiere will work natively with your ProRes media.  If you’re still on a legacy version, like many editors currently are, you need to keep QT on your system. In the Premiere Pro CC 2015.3 release notes on the Adobe Blogs website you will see  “Additional native format support: Apple ProRes QuickTime files can be decoded on Windows without needing QuickTime installed on the system. RED camera raw file decoding now supports RED Scarlet-W, Raven, and Weapon cameras, including 8K .r3d footage.  Avid’s official statement on this is that they “have been working on a solution to remove Media Composer’s and Pro Tools’ dependencies on Apple QuickTime libraries. We will be releasing an update later this year to accomplish this. This update will include support for:

Now, with that being said, it’s great that we can finally remove QuickTime from our systems, and work with codecs like ProRes natively, but what about outside of our applications.  What do we do in situations where we need to QC a ProRes file to check it when we export it to send to a client, or check the Closed Captioning on a file, or check the LKFS Loudness?  That’s where Telestream Switch comes into play.

Now, one thing that a lot of people will say is that they use VLC because it’s free, and it does a good enough job.  Well, I’ll be honest.  I hate VLC.  Many people love it, and rely on it for their file QC, but it’s not very good.  I don’t even find the way it shrinks and zooms into footage to be very good, and that’s just some basic stuff.   It’s also just that.  A file viewer.  Believe it or not, Switch already up to version three, and Telestream has done something very smart, by releasing three flavors of Switch, depending on your needs.

There are some very clever new features in version three that make it a must upgrade if you’re working with version two.

This one caught me a little off guard, as it’s an awesome idea that you normally would only associate with a feature in a non-linear editing application, but it’s something super smart.  For anyone that is having an issue with a “Before and After” file, meaning that you have a file that you’ve altered in some way, and you need to compare it to what it looked like before, say maybe there is a gamma shift, or something like that.

Do you have the new Avid DNxIO, or how about the Intensity Pro 4K?  You can send video directly from Switch to a broadcast monitor via SDI or HDMI so you and/or your clients can view their files for approval, or just as a final once over before delivery.  Keep in mind that the ability to view your files via AJA devices is already a feature of Switch!

Once you’ve QC’d your files in Switch, you can not only export the files to different file types and codecs, but now in version 3, you also have the ability to upload directly to YouTube, Facebook and Vimeo, right from within the interface.  You also now have more export containers to choose from, like MXF-OP1A.

One thing that will confuse a lot of people is what you get in the different versions of Switch, so let’s break it down, and see why, if you do a lot of quality control, file conversion or uploading to social media, Switch 3 Pro will be right for you.

The most basic flavor that Switch comes in, and is really designed to be a replacement for QuickTime 7 player.  It’s free, and it lets you:

Get information from your files, much like using MediaInfo for either Mac or Window, all from within the interface, much like with QuickTime Pro.  Information such as:

There is only one “Fix It” feature in the free version of Switch, and that is the ability to do a “Pass Through” export, but you’re limited to 30 seconds, or half the duration of your clip.

Keep in mind that as great as the free player is, there are some limitations to it including:

With that being said, there’s absolutely no reason why you shouldn’t have the free version of Switch on your system, as it’s free, and a fantastic player.  Now, Switch Plus adds additional functionality to each category.  You get all the previous features plus…..

The second rung up the ladder is $50, and if you’re looking for a basic “QuickTime” type player that takes it up a slight notch, this one would be right for you.  Remember, with what I’m listing below, you get all the features of the free version, plus: 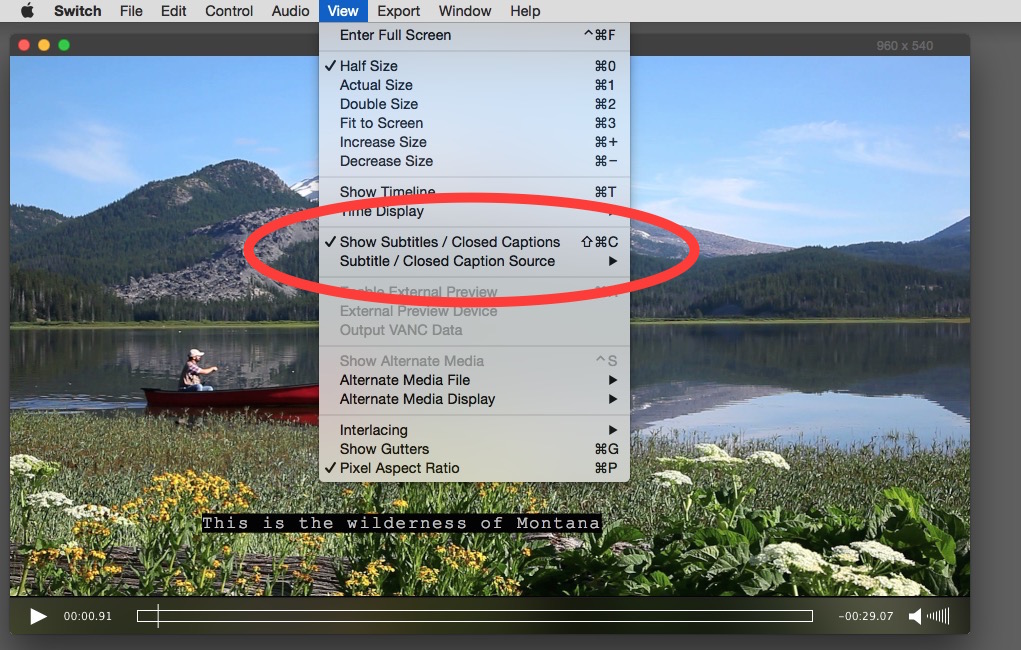 For anyone who doesn’t do any large quality control jobs, and is just looking for a solid player that can upload files to their favorite social media platforms, Switch Plus is the one for you

Something else that I want to point out, is that one feature I use in QuickTime, all the time, is the Inspector.  It’s my “go to” inspector, when I’m too lazy to go to MediaInfo.  It’s simple, straight to the point, and small so that I can take a screenshot of it, and easily send it to a client, or other editor if I need to.  Well, Switch has an inspector as well, and to be honest, I like it more than its QuickTime counterpart.  Again, simple, straightforward, in a small enough window to make it a simple snapshot and send, but with much more info in it like Color Space, Field Dominance and even Aspect Ratio, which are all simple, but important information that you need to know, at the click of a mouse. 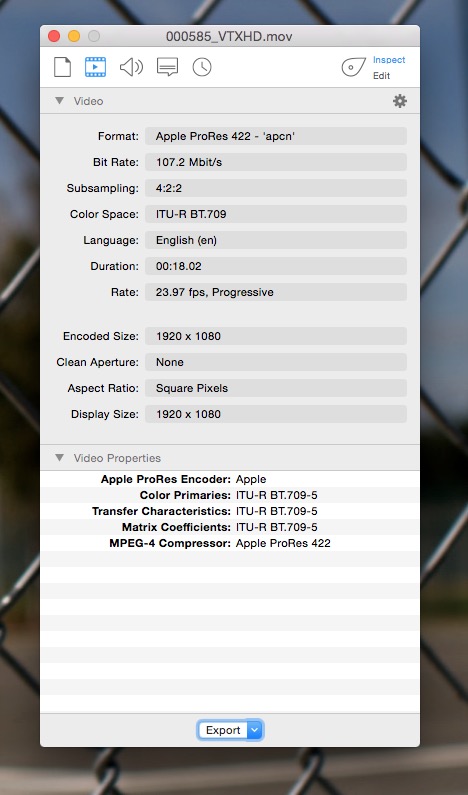 I want to mention, before I wrap up this article, that when you purchase Switch, you get one year of premium support, that gets you phone and priority e-mail support between 8-5pm PT, Remote Access Services, and most importantly Switch updates for a year.

If I had to have one beef with Switch it’s that theDNxHD, JPEG2000, HEVC, DNxHR and AC3 playback should be included in the “Plus” version of switch, as it makes it a “complete” player by having those codecs unwatermarked with all the rest.  I’m a little surprised that they didn’t go this route, as it still puts money in their pockets, and keeps the big features like Loudness monitoring for the Pro version.  Telestream SHOULD include this feature as part of the “Plus” version for Switch 4, and it’s something I’m going to make sure they hear me on.

With the death of QuickTime, Telestream’s Switch is poised to rise from the ashes and take QuickTime’s place as your main application for all your file quality control, and viewing needs.  If you do any type of work that requires you to be monitoring things like audio levels, loudness, or need to compare before and after files, definitely consider Switch Pro.  It’s worth the $295 US.

For more information, or to download the free version of Telestream’s Switch, you can check it out on Telestream’s website. 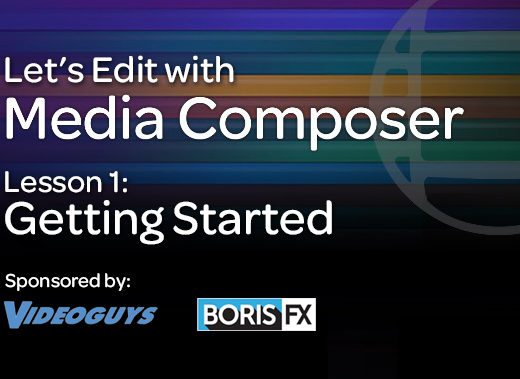 Hey Everyone, So, I’ve been debating for a while now about rebooting the channel, and taking things back to square one.  Media Composer has...

With our current distancing due to the COVID-19 pandemic, musicians are hit hard by not being able to perform publicly with each other. Performing...

One thing that disappoints me, is when companies decide what is right for us.  They decide that they know which path our clients should...

Audio editing can sometimes feel like a forgotten aspect of filmmaking and production. Yet, as a twenty-year veteran camera operator, I learned the visuals...