I blogged on a tutorial from Event DV around editing workflows with AVCHD. In that same issue, contributor Jan Ozer wrote an article called CS4 at 64 that delves into the differences that he observed between Adobe applications and how they perform differently between 32bit Windows XP and 64bit Windows Vista.

For me, it’s clear that 64 bit operating systems are becoming more mainstream – or at least among content creators. The benefits for consumers may be less obvious at present, but I believe it’s just a matter of time. Over time we have seen consumer PC’s slowly grow in memory and performance from 64MB to 512MB to 2GB and now we’re starting to see 4GB as standard in many value PC’s and even some laptops. With more software and services available, it means more things running at one time. In the same way, I believe that XP’s 4GB limit is being felt by creatives today and consumers in a very short while. When it hits consumers, we’ll start to see the shift towards 64bit and away from 32bit.

The question then becomes why there is the performance gains and does it make sense for me to move (and can I) to 64bit today?

Mac users: anyone on MacTel platform (Intel instead of IBM/Motorola chips) should be running mostly 64bit already and their hardware is good to go.

For PC people: obviously we have both XP and Vista and each has 32 and 64bit flavors. Both 32bit versions can address only 4GB of total memory)

Adobe does not officially support the XP64 OS and while I understand why some people might want to consider it, its just not supported, nor do I expect Adobe to change its position on this one. Vista 64 is the here and now and it’s gone through it’s growing pains. It has arrived as a mature, capable OS for the most part.

To answer the question about what is driving the performance increases, it mostly comes down to memory addressing and how much you can address with 64bit OS’s. With memory addressing, Vista 64 business will allow you to install over 128GB of total memory. That’s right, Gigabytes! With memory around $30 for 4GB (more for good quality memory), it makes sense to load up a reasonable amount as part of your new system costs or as part of a PC upgrade. It’s pretty much the same on the Mac side as well. Well over a year ago, I put 9GB of memory into a Mac tower and definitely saw the differences.

The advantage for Adobe applications is as follows. Photoshop CS4 is native 64 bit on PC (sorry Mac folks it’s a Carbon 64 where’d it go kind of issue – check out John Nack’s post) and provides performance increases on large PSD files. After Effects and Premiere Pro CS4 are both able to address up to 4GB of memory PER PROCESSOR CORE! This means that if you have an 8 core system, you can address 32GB of memory for the applications! An 8x increase over 32bit. Even if you don’t jam in that much memory, having 8 or 16GB of memory is definitely worth having as Jan outlines.

On the Mac side, it is similar but do to some OS issues, Mac users only address 3.5GB of memory per processor core. Nothing to slouch at to be sure! 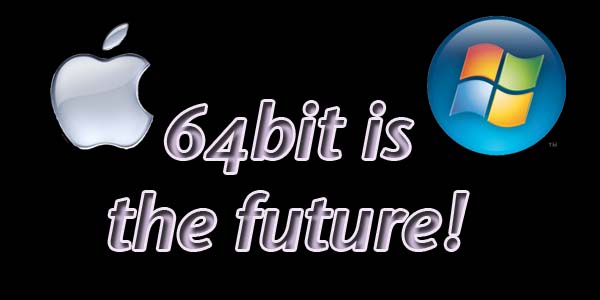 What I find interesting is that both Avid and Apple haven’t made much about 64 bit yet – though I’m sure it will change. As people use more diverse types of media, tapeless workflows continue to develop and vendors create tighter integration points between applications (Dynamic Link), it will only be a matter of time before both of these companies move their applications over to 64bit. Once they do, I’m sure it will be a question in the forefront of every person’s decision – “Is this application 64bit aware?” For today though, I’m happy to be part of the leading edge. 😉

It’s clear that 64bit OS’s are the future and that Adobe applications are taking advantage of them today. So, if you’re looking for software that is embracing 64bit today, look no further than your CS4 applications. Throw in some GPU and H.264 encoding performance with a Quadro CX card and you’re cooking with gas! 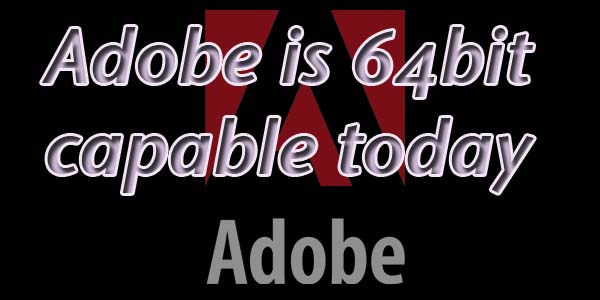