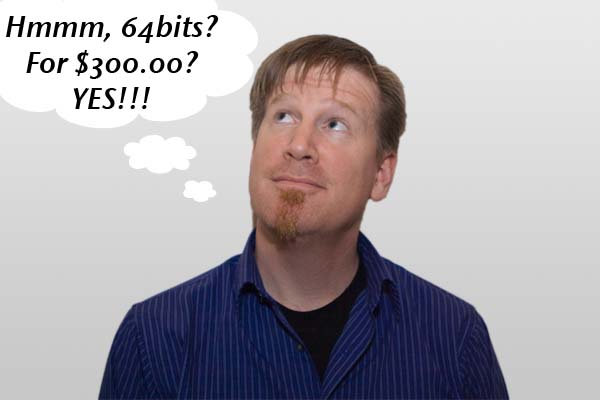 I’ve had some more thoughts on the ideas of 64bit and it’s value in light of this poor economy. I mean what’s the point of talking about 64bit if you can’t actually use it? With that in mind, I set out to see how much moving to 64bit on the PC platform would actually cost the average consumer.

If you’re interested in the original article on 64bit, you can read it here.

In the other article, I outlined what the compelling performance and time saving advantages that a 64bit OS offers users. It also referenced some actual, real-world time savings tests that were conducted by Event DV writer Jan Ozer. In most cases, the results were 50% performance increases or better.

So, if you’re a PC user and your system is good enough to run Vista 64 here’s the breakdown for you.

Vista 64 Ultimate is only $219 as an upgrade for existing Windows user – That’s really not too bad right? Add to that, 8GB of memory and you’re off to the races. Now, there’s the really good news – memory is CHEAP! To illustrate this, check out this link on current memory prices. 8GB of memory obviously varies based on what type of memory your motherboard receives, but on average, 4GB of memory can be around $40.00 per stick and so 8GB can be about $80 or LESS. Not bad, right?

Therefore, moving to Vista64 with an adequate amount of memory becomes a $300 proposition. Given the performance benefits that this delivers, it almost becomes a question of whether you can afford not to? This is where I would appreciate your comments.

I know that someone might say that XP performs better than Vista 64 and this link would tend to agree, but I have to say that Vista and ultimately Windows 7 are the future and so XP will continue to recede. In addition, I’m sure Microsoft will continue to develop performance increases over time. And if that weren’t enough, as we move from 4 to 8 to 16 cores, doesn’t this become a moot issue?

And lest you think that this is all about the PC platform, let me recap the Mac solution as it stands today. Leopard has big chunks of 64bit built into the OS already and Production Premium CS4 supports 3.5GB per processor core, so in some ways, the value proposition is even less expensive for Mac users assuming they are already on Leopard (OS X 10.5).

What do you think?