Let’s say you’re a film student or filmmaker and you’re interested in telling a story that will stay with your audience beyond the ‘Fade Out.’ Let’s say you want a webisode to go viral. Or, a couple of years ago, you heard Disney and Fox talking about transmedia. Now you’re wondering how to stay on trend with these big distribution companies. How would you even begin to write, shoot, and produce a story that is ‘transmedia” ready? 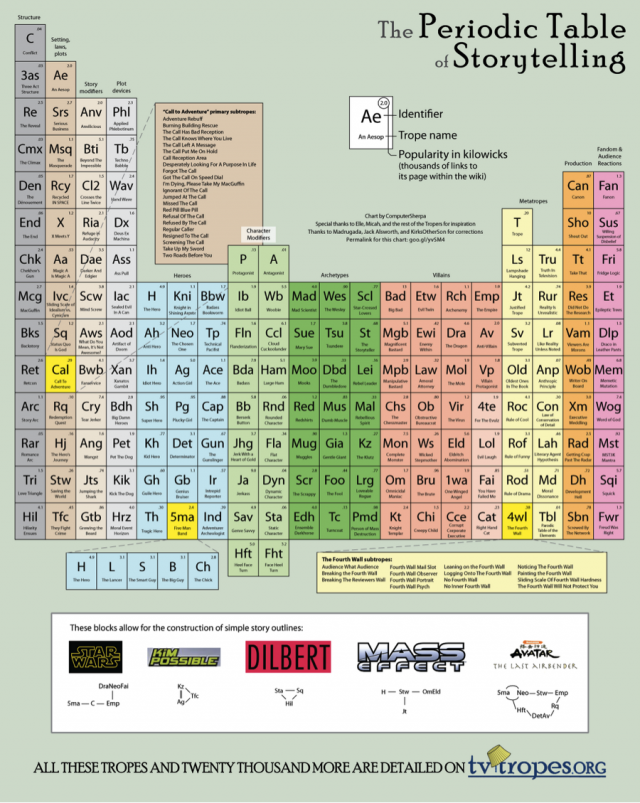 Harris has taken all the tropes; archetypes and clichés found in movies, TV, comic books, and literature and synthesized them into an elegantly realized chart.

This model is often used by J.J. Abrams. Many, like Pont, talk at length about J.J.’s transmedia genius.

Here are some examples of the orphan model: 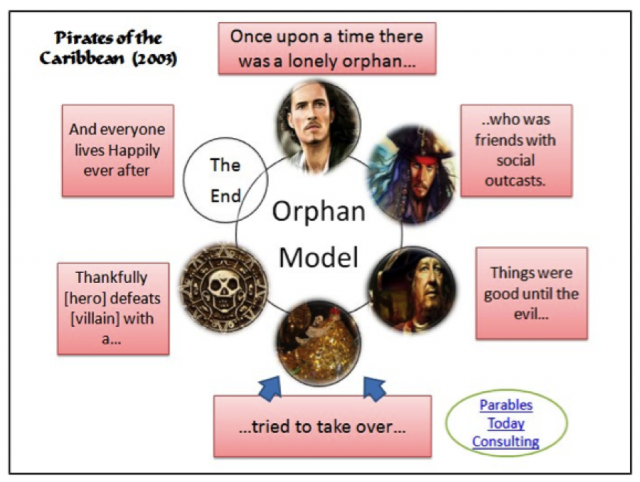 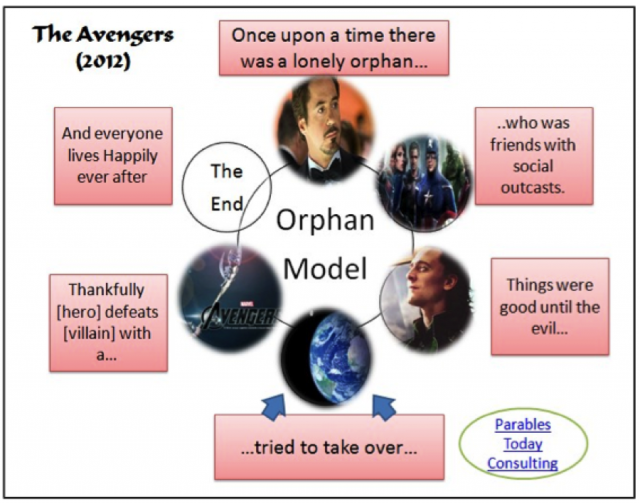 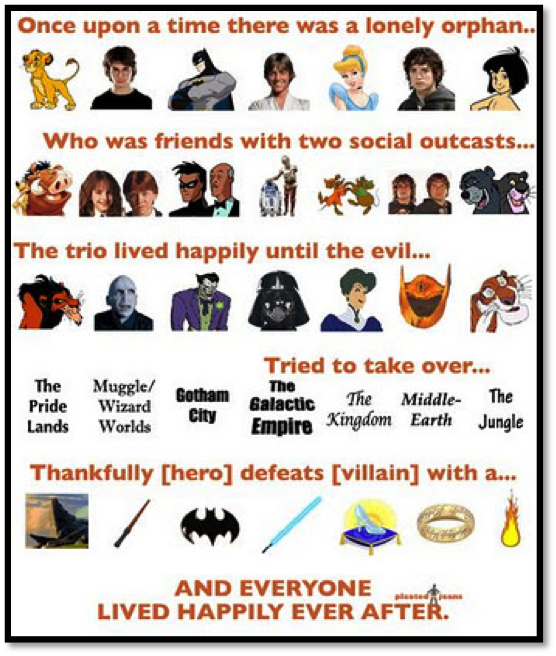 It doesn’t hurt to throw a love triangle in there too: like Hunger Games (page 8).

Once you have developed this model, begin placing mystery boxes all around. This will help your story world link out into other media platforms.

2. CREATE MYSTERY BOXES WITHIN THAT WORLD.

Pratten made a good chart showing the different directions these mystery boxes can take you in your story world. 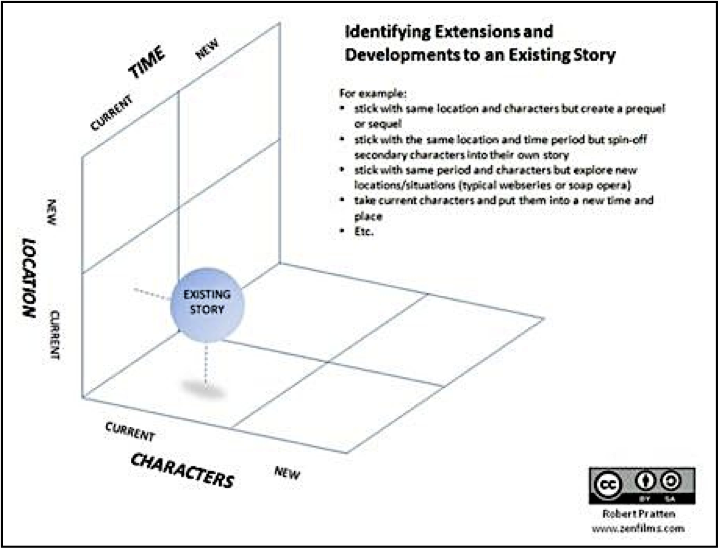 Mystery Box is a term I’ve co-opted from the J.J. Abrams Ted Talk of the same name.

Each character in the orphan model has immeasurable opportunity for mystery boxes. Here are some examples:

You do not have to even ‘know’ the possibilities of opening the ‘box.’ Eszterhas says, “If you’re writing a mystery, let it be a mystery to you too” (169) and Paul Haggis always tries to write towards questions instead of answers.

Below are some examples of boxes and their media platforms for LOST:

3. MASTER THE ANATOMY OF THE VIRAL VIDEO.

Writer and analyst Kevin Allocca works with YouTube Trends, a spot for tracking the latest viral videos. He connects them to the communities that make the parodies, tributes and reply videos within the ‘viral planets’ of YouTube’s universe.

He’s composed a pretty simple formula worth mastering (for a scene in your show or ads for your story):

Tastemakers are mostly celebrities, talk show hosts, and news anchors (spend some PR bucks!). Community remixing refers to the fans on the various media outlets: it has to be easy to remix and share. The Unexpected means the story/scene/video itself has to have an M. Night Shyamalan twist in it.

I do not have the data yet but the people at Mullen who made a viral mother’s day video pointed some things out about their video brake down. They introduced a twist 45 seconds in and then their M. Night moment was 3 minutes in. I would suggest making the videos 3-4 minutes and doing the same.

Below are some viral examples from LOST:

4. SHIFT YOUR EMPHASIS FROM STORYTELLING TO STORY MAKING.

Encourage fan pages, real-time hashtag conversations with the characters, and wiki forums.  The audience members are the story makers and the audience has an audience.  The research also shows that 91% of viewers would feel compelled to tune in more often for things happening in real time.

This is the ultimate shift in transmedia screenwriting: writing towards an open culture of crowd sourcing. This is what makes the periodic table so appealing; it is the result of audience collaboration.

As Lan Mochari points out, ‘the big problem with storytelling is it’s a one-way street’ with your script or brand doing all the talking.  Web 2.0 changed our world from ‘one to many’ broadcasting to a ‘many to many’ experience.

Transmedia screenwriting isn’t about you broadcasting your message to the masses with a digital media megaphone. It’s about story making, where as D. Berkowitz puts it, the script (or brand) narrative ‘facilitates and taps into the stories people are creating and sharing with each other.’ 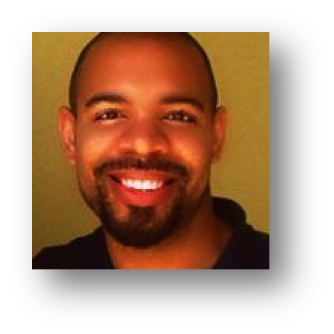 Dr. Chester Elijah Branch is a best-selling author and Transmedia Architect, teaching transmedia courses internationally. He studied digital and social media marketing at Inbound2014. His Doctorate is in Business and Leadership with a focus on transmedia consulting. The former President of Walt Disney Pictures endorsed his Transmedia Storytelling eBook as a ‘must have’ guide to transmedia storytelling.