Not too long ago, you like me, wondered what kind of camera Blackmagic Design was about to release. Minutes into the Livestreamed product announcement Blackmagic Design CEO, Grant Petty, surprised many by showing an image in HD and then widening the view to show 4K, then 6K, then 8K, and finally landing on 12K. Hence, they doubled the then highest current camera offering from Blackmagic Design, the Blackmagic Pocket Cinema Camera 6K. 6K never felt so inadequate. 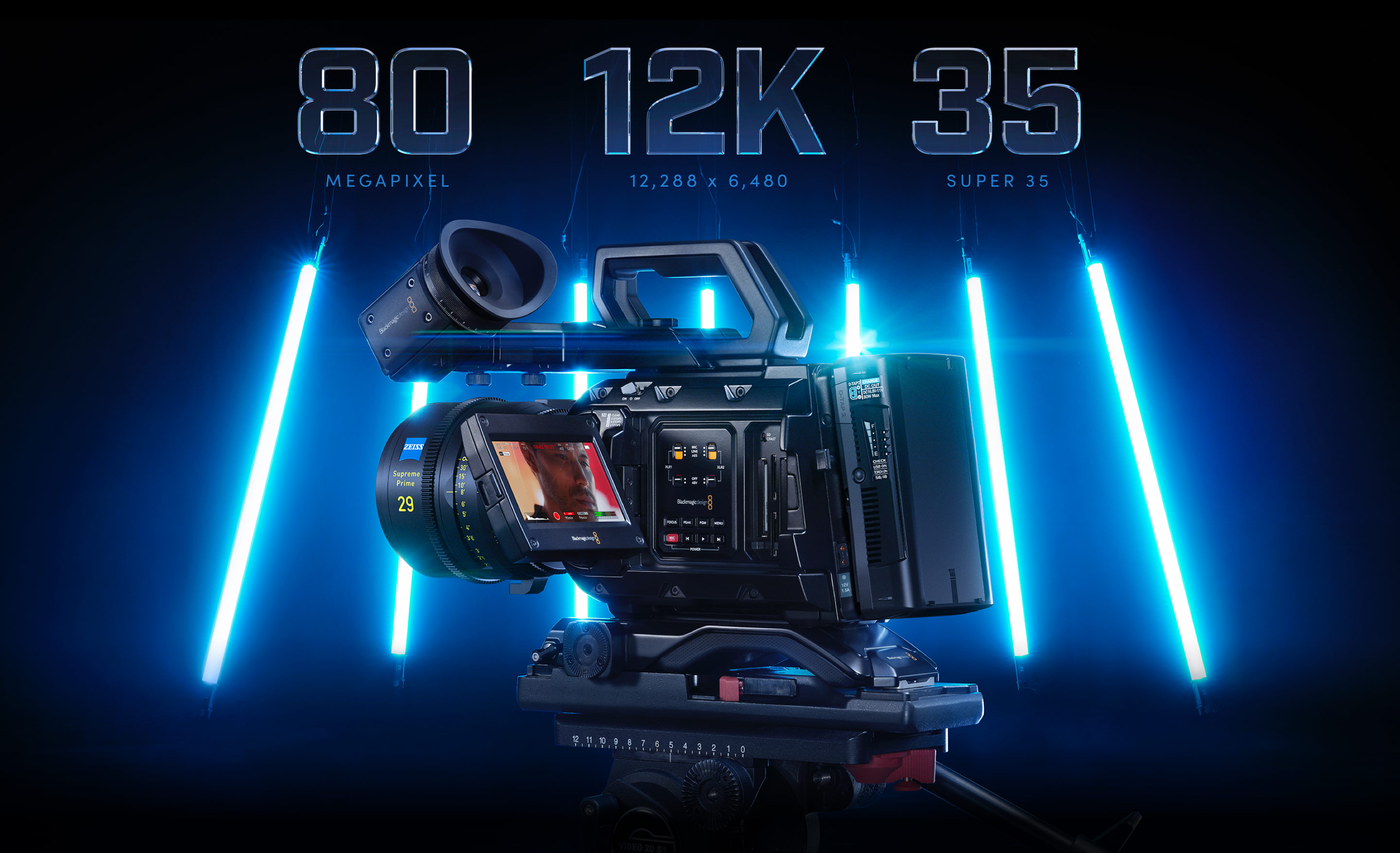 Speculation ensued. Comments fell onto the internet like rain pouring down during a hurricane. “Why 12K?” and “Who needs 12K.” are just a few general ideas many desktop dilettantes wanted to get across. For me, I’ve never understood the negativity surrounding a camera. No one is forcing you to buy it. Do your research and buy or rent what is right for you. But, I digress.

Like you, I’m guessing you wanted to know more about the new URSA Mini Pro 12K, its sensor, and the winds of speculation surrounding the 12,000 pixels of innovation. I dove deep into the internet seeking the definitive answer to my questions, and like a sponge, I soaked it all up. Then, I stopped reading and rereading the same speculative sensor theories drowning the cinema camera section of the web and called up as close to an expert I could find; actually, I found two.

Years In The Making

What is interesting is the 12K camera and the sensor behind the innovation is part of a trifecta puzzle Blackmagic Design took years to bring to fruition. In part, to deliver better pixels, better color, better tone, and overall a better imaging pipeline usually reserved for much more expensive systems to the masses. Brawley told me, “They’ve been working on this for so long and their own kind of solution… their custom sensor shows they’re kind of maturing as an imaging company.”

If one looks back into Blackmagic Design history, you can see the trail of innovation crumbs building to this new 12K camera. Bob Caniglia from Blackmagic said, “One of the main reasons for developing Blackmagic RAW was to have a codec that could be used on even larger file sizes.” From the lessons learned from DaVinci Resolve, creating a new raw codec with Blackmagic RAW, and now the new 12K sensor, you can see how Blackmagic has built momentum toward this moment. “The whole design of the sensor was approached to kind of make better pixels really, I think really was the thinking and why they went away from the Bayer sensor,” according to John Brawley.

Yet, when I pressed Bob from Blackmagic to be more forthcoming on the 12K sensor’s design, I received a brief, “we’re not being particularly forthcoming with a lot of it.” I get it. Cinema camera manufacturing is competitive. What we do know about the new 12K sensor “From my understanding, they wanted to address the imbalance of the color pixels in the sensor and really to borrow an idea they’ve long done in Resolve, which is they’ve always been RGBY. They’ve always had the extra brightness separated out in Resolve controls,” according to Brawley.

In layman’s terms, The new 12K sensor has an equal number of red, green, and blue pixels and a “white” or “W” pixel dedicated to exposure. This same number of RGB pixels is a wholly different sensor design than the URSA Mini Pro G2. In fact, all the other camera’s Blackmagic Design offerings rely on a Bayer pattern sensor design. A Bayer sensor is different from the new 12K sensor because the Bayer filter pattern is pixel pattern of 50% green, 25% red, and 25% blue and, as you can see, without an equal number of color pixels between RGB.

Look, there is an enormous amount of engineering involved with the new sensor that flies way over my head. I went to art school, where we rarely debated how the paint was made and focused on what we painted with each color. I get the feeling some people, but not all, tend to feel the same way.

The unique position of owning Resolve seems to have been the starting point leading Blackmagic down the 12K path. “This is the kind of unification of their color science in Resolve. The codec was designed with the sensor in mind, and now the sensor is the last piece to come into play here and to make all of this possible, said John Brawley. 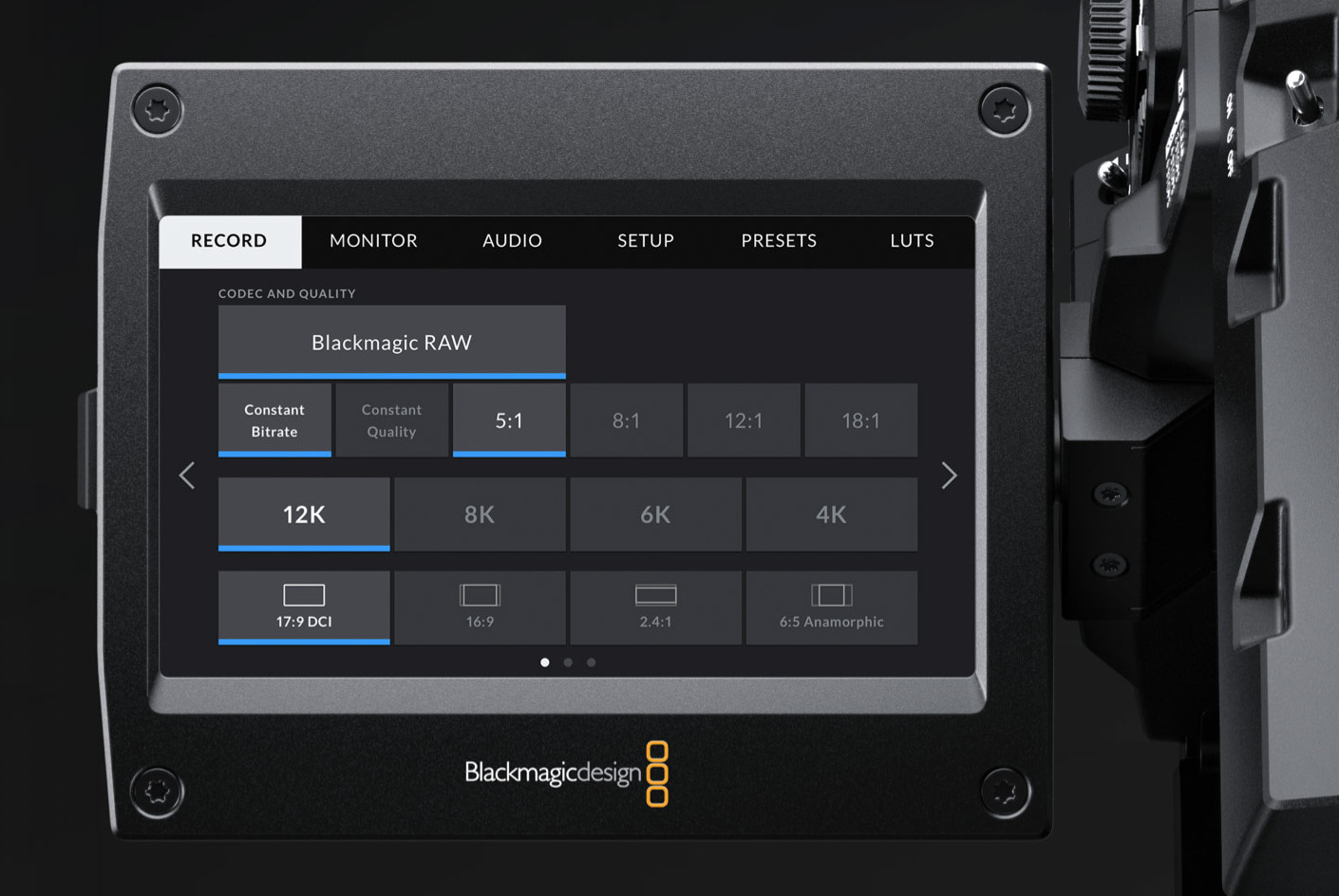 Remember the trail of innovation crumbs? Blackmagic RAW seems to be a big piece of the 12K puzzle. Two years ago, Blackmagic RAW was released with the URSA Mini Pro G2. The compressed raw codec made its way into the URSA Mini Pro G1, The Pocket Cinema Camera 4K, 6K, and even the URSA Mini Broadcast. Yes, the URSA Mini Broadcast is one of the only UHD compressed raw broadcast-style cameras available. I just wished the UM Broadcast had better lowlight capabilities. According to Bob, “One of the main reasons for developing Blackmagic RAW was to have a codec that could be used on even larger file sizes.” 12K is a larger file than 4.6K, for sure. Quick question? Do you expect an even higher resolution in the future? Speculation for sure.

Putting the pieces together

So, it seems the culmination of DaVinci Resolve and Blackmagic RAW was vital in developing an RBGW 12K Sensor, but that is not the whole picture. Honing in on color science and how a camera takes information from a sensor and turns it into an image is a big step. “Even if we gave this sensor to other companies, they’re not going to get the same results that we get because of the way we do it. I’m not saying their results will be better or worst I’m just saying they’re not going to get the same results.”,” said Bob Caniglia from Blackmagic Design. Even Brawley shared his thoughts on how the color science has developed over time, “I certainly feel like it’s a very maluble image. You know, it has a lot of flexibility, and the color and the tone and the way it renders is beautiful as well.”

Saving On A Camera

Blackmagic Design builds cameras like they have a chip on their shoulder. They put out less expensive cameras with features usually found on more expensive offerings. Blackmagic Design has moved camera manufacturers to offer up features they might not have done in many ways, so, yes, this is speculation. Yet we cannot deny it. Interchangeable lens mounts is just one of the features standing out to me. On the original URSA and then URSA Mini Pro, owners/operators could change their lens mounts instead of sending them to an authorized servicer. 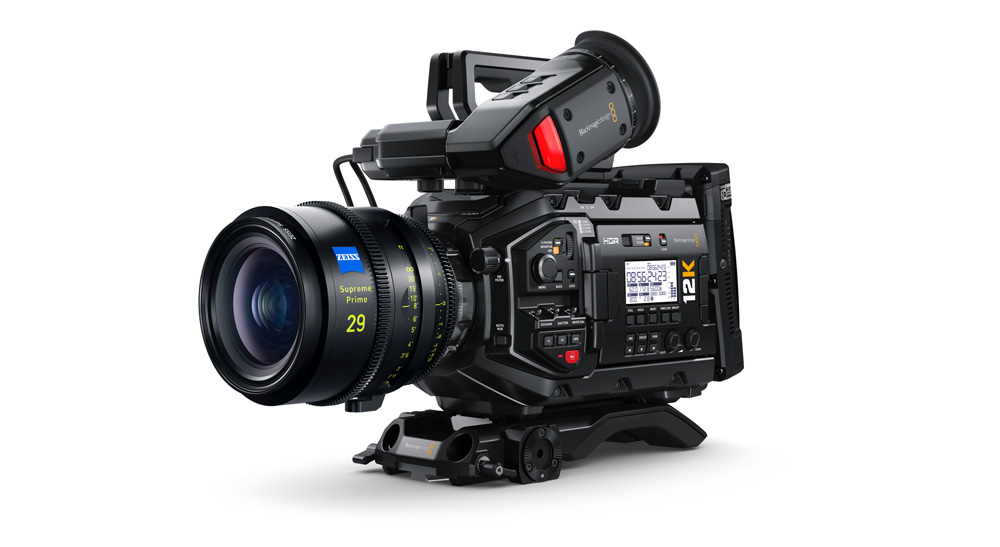 Keeping the same body design is essential because a new camera’s final cost is nearly never what a seller’s website states. Owners usually need to add a new type of recording media, camera cages, and other necessary accessories to make a cinema camera more comfortable to operate. If you already bought into Blackmagic Design’s URSA Mini line, you likely would be able to save a little bit of money by using your existing accessories, batteries, and media.

Taking all of these elements and one can see Blackmagic Design set their goals for this moment years ago. Setting very long term goals like this is forward-thinking manufacturing, and we are benefiting. I am not suggesting other camera manufacturers do not set long-term goals like Blackmagic Design. I’m only suggesting the company’s ethos and innovation have blended uniquely. 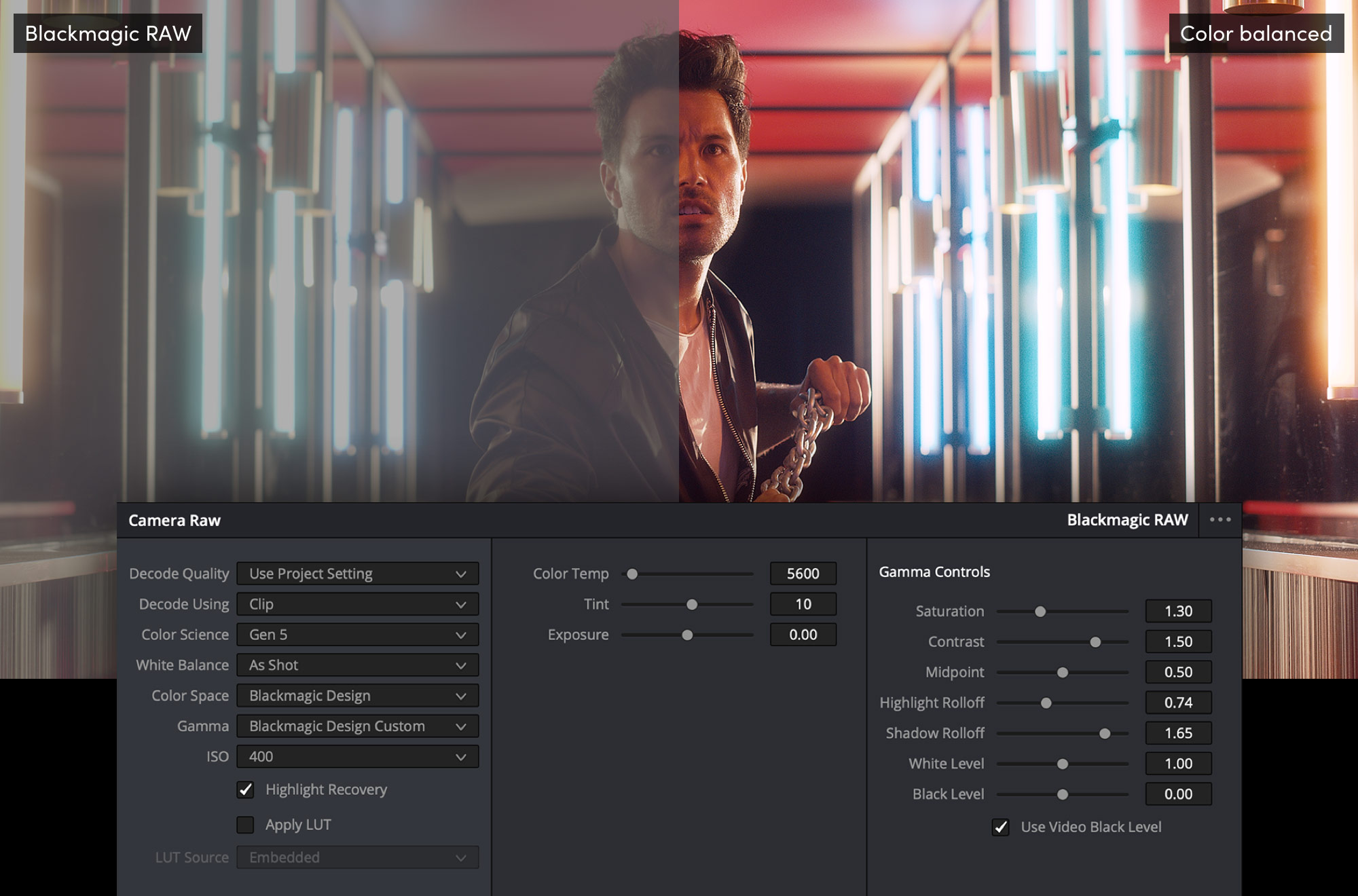 “It starts to become very compelling with a camera like this because it does offer something that nobody else can offer. So, you know, people will start to overlook those shortcomings in their particular circumstances and go, ‘Well, can I work with that? Maybe it’s worthwhile working with that now.’ And I think they’ve made a really interesting challenge for people who may want to preference high resolution,” said Brawley.

Brawley asked the question many of us are asking ourselves. Can we work with 12K? Is it worthwhile for us, as director of photographers and cinematographers, to dive deep into a 12K world? A final thought from Brawley begs the ultimate question, “I have to say, you know, I’ll be very interested when I go back into my next show to put this up as a genuine contender in terms of imaging and see what we can do against the other solutions that are out there because I think from a color and look point of view it certainly is a really compelling case and it makes it easier than to forgive some of the other shortcomings that naturally come with a less expensive body where it doesn’t have all the Cadillac features and all the bells and whistles but at its heart still makes a really great picture.”

The images online, which is admittedly not the best place to pixel peep, do look fascinatingly three dimensional. Bob gave us one new piece of information on the URSA Mini Pro 12K. The latest info revolves around achieving critical focus in 12K. Well, Bob has an answer for you,” “You have a Pocket 4K you can pinch-zoom to check focus. You’ll be able to do the same on this one but output the pinch-zoom to a larger display to check focus.”