Get an instant 48 kHz recording or live broadcast from Zoom PodTrak P4 despite its current Achilles’ heel, with a couple of sacrifices. 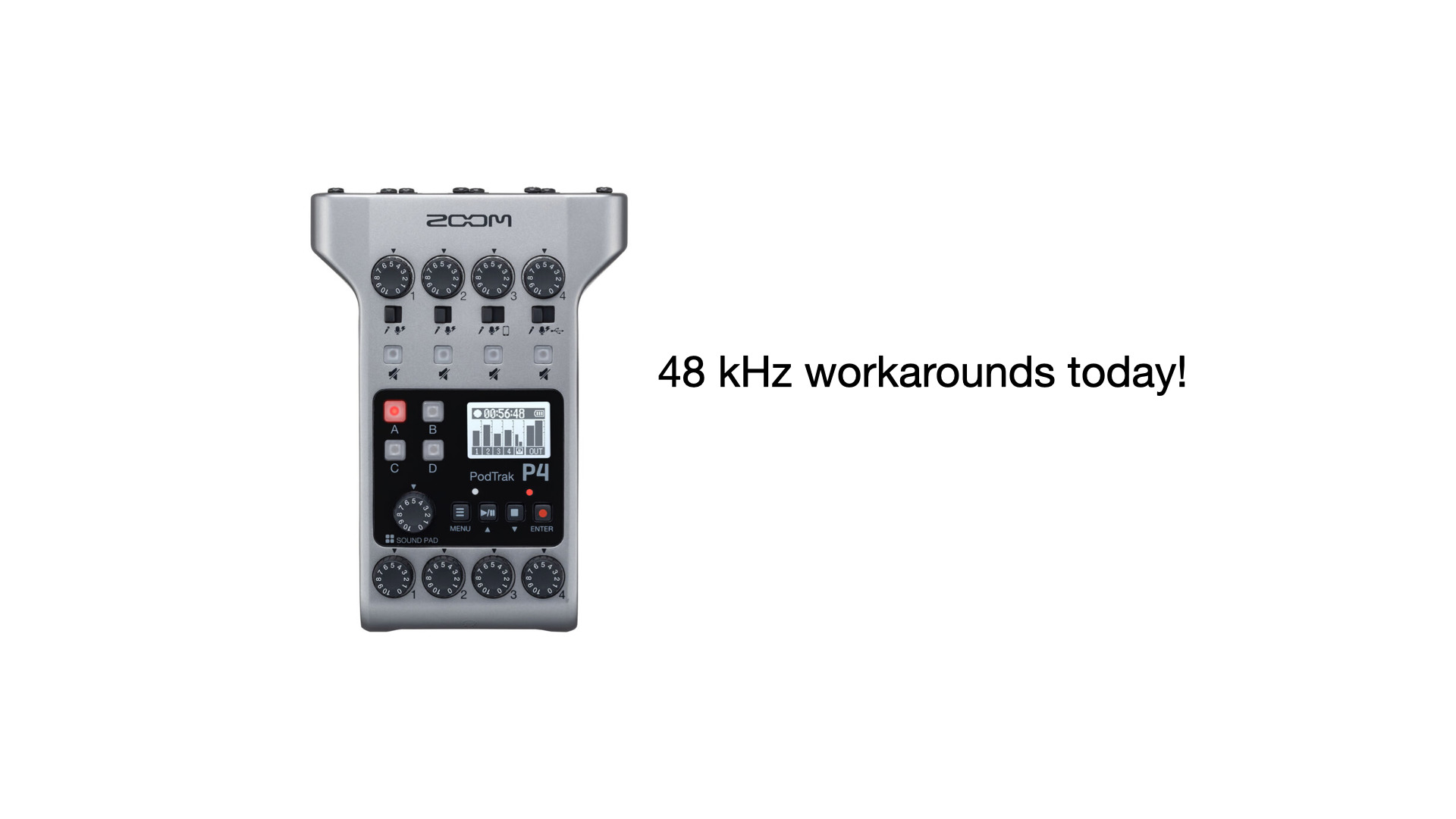 I have been very vocal about the lack of 48 kHz audio sampling frequency in the Zoom PodTrack P4 (and PodTrak P8), since their current lack of 48 kHz recording has effectively disqualified them from the professional video/television production world (or even to promote an audio-only show for television —without going through hoops and potential traps). I haven’t been the only one to criticize this unfortunate Zoom situation: My colleagues Jon Caron, Curtis Judd (who has been a guest on my BeyondPodcasting show), Chris Spiegl and others have also been publicly critical to Zoom about the lack of 48 kHz in these devices’s recording and USB connectivity (in most cases… Read ahead for an important exception.). As I wrote in PodTrak P4 & P8: Will Zoom unlock them, free or for a fee?, I still both hope and expect Zoom to offer this missing mode as an official firmware upgrade (or perhaps a higher end version of the them with a different name). In the meantime, this article covers three workarounds to get a direct 48 kHz recording or live broadcast from the otherwise compelling Zoom PodTrak P4, albeit with a couple of sacrifices which will be fine for many applications.

The analog opportunity and the USB miracle

For all of the reasons promoted by the 48 kHz Alliance, the reasons to produce exclusively go way beyond audio quality (although that is certainly important too). Even though at publication time of this article, the P4 doesn’t yet offer internal 48 kHz or even official USB interface at 48 kHz, the analog output ports are fortunately immune from this issue, since only digital signals have a sampling rate. In addition to that, even though when connected to a conventional computer via USB, the digital selection is fixed at 44.1 kHz, I have successfully gotten a direct 48 kHz recording via USB-C from the P4 using an app on a smartphone and on a Chromebook, as elaborated in Workaround 2 ahead.

Despite Zoom’s restriction of only 44.1 kHz in the internal recording, the analog outputs are free of any sampling rate. In the above video, you’ll hear my voice via a dynamic analog microphone, connected directly to the P4 microphone input 1. All other inputs were muted. The stereo analog headphone output 4 fed the Sony ZV-1’s input via a 3.5 mm TRS stereo cable.

I made the ideal gain staging by setting the ZV-1’s audio setting to manual at level 1 to use the least amount of of the ZV-1’s preamp. To match levels, I set the headphone 4 volume to 5 after setting a healthy level between -12 and minus 6 dB within the P4, even though I did not record inside the P4.

I thank Stephanie Lin, since in her video, she had connected her Zoom P4 to her Canon R6, since that camera/camcorder indeed records our absolute standard for video of 48 kHz audio sampling just like the Sony ZV-1. Her video was my inspiration into testing different ways to make proper 48 kHz sampling recordings by using the P4 as a mixer only. Stephanie’s microphone in that video is the dynamic PodMic from RØDE. I found no lip sync issues with her recording and the audio sounded clean. Likewise, I find no lip sync issues when feeding the Sony ZV-1 with the P4 this way.

For the above recording, I used the Auphonic app for Android at 48 kHz within my Chromebook. Although the P4’s USB output is stereo, I set the Auphonic app to record mono to save space, since the microphone is mono and I didn’t play any music.

Above is a cropped screenshot of the raw recording in the Auphonic app for Android in my Chromebook. I noticed a phase issue, so I fixed that with RX6 independently before I did the trimming, processing and export from Hindenburg Pro. Curtis Judd (who has been a guest on my BeyondPodcasting show) has a great tutorial about fixing this type of phase issue (not the other type, which is usually associated with a stereo signal). Curtis’s tutorial is called Izotope RX Phase — Fix Uneven or Asymmetric Audio Waveforms.

Workaround 3: analog stereo Zoom H1n (≈US$120 or much lower on sale) or other external recorder

Ironically, Workaround 3 can employ a much lower cost recorder from Zoom, which —by itself— I dislike since it does not have any separate physical knobs to adjust the individual gain if connecting two different microphones with a Y-adapter. However, in this case, the H1n will simply receive the stereo output from the P4, where the gain of each local microphone (or remote guest) is independently handled by the P4. This connection is similar to the one shown in Workaround 1.

Gain staging the P4 to the H1n:

With most recorders and camcorders, one should set the input level to the minimum that still works (as I explain in Workaround 1 with the Sony ZV-1 camera/camcorder). However, due to a very unusual situation with the preamps in the H1n, documented by Curtis Judd in his 2014 Zoom H1 Optimal Input Level and about four years later by Julian Krause in 2018 his Zoom H1n Optimal Gain Level, one must avoid the lowest ranges because it ironically causes causes clipping, since in the low range, the H1n irronicly incorporates digital attenuation, rather than analog attenuation. In fact, Julian Krause states that this exact same situation also exists with the original H1, the predecessor of the H1n which some of you might own or might purchase used.

Speaking of attenuation, some of you might of you might be asking whether an attenuating cable should be used between the P4 and the H1n for this setup (or with the one in Workaround 1 with the Sony ZV-1). Although you might need an attenuating cable if the output of the P4 had a fixed official line level output, that’s not the case since the P4 doesn’t have that any official line level output. Instead, we are using the trick of using headphone output, out of necessity. Although recording from a headphone output is not generally recommended when a pure line output is available, it does work quite well in these combinations with the P4 as you’ll hear in the results from Workaround 1 and with Stephanie Lin’s recording. The variable level offered by the P4’s headphone output effectively eliminates the need for an attenuating cable.

Before recording, do your gain staging this way between the P4 and the H1n:

I have no other option but to see the Zoom P4 as a “black box” (Wikipedia article about this term here). I don’t possess any schematic of the P4, so I don’t really know whether the internal audio mixer is pure analog or not. Although it is indeed possible that the P4 may be mixing audio in the digital domain… perhaps at 44.1 kHz or perhaps at a higher sampling frequency, that issue is secondary for the goals and alternatives offered in this article. Just as my research indicates the US$399+ RØDELink wireless system has a internal audio sampling of only 44.1 kHz but exclusively offers analog input/output, the RØDELink wireless system is of extremely high quality and very highly rated as a “black box”. Although it is certainly not ideal to have an internal processing of only 44.1 kHz, the bottom line is whether the final analog output (or final digital output, in the case of Workaround 2) output is of sufficient quality for particular use cases, and whether there is any noticeable delay/latency, and fortunately there is not any. This has absolutely nothing in common with the havoc associated with receiving or delivering a file encoded at 44.1 kHz or USB signal which is stuck at 44.1 kHz, either of which can be kryptonite for a workflow or venue that demands 48 kHz, i.e. all of the ones listed in the 48 kHz Alliance Warning show below.

The quality level of the live outputted signal from the P4 is a combination of many factors, some known and others unknown to people outside of Zoom. The bottom line is that the P4 is great for many applications, even when the internal recorder is not used. There is no doubt that the majority of the US$399+ RØDELink wireless system users have loved the end result, and most likely don’t even know that the internal processing is 44.1 kHz since its own outputs are analog.

Despite what I consider to be a major design flaw in the Zoom PodTrak P4 (the lack of internal 48 kHz audio sampling —until Zoom fixes it via a firmware upgrade or new model), the P4 is still uniquely compelling after sacrificing its internal recorder and simply using it as a 4 channel mixer with virtual carts (“sound pads”) and telephone and computer connectivity. This article demonstrates three viable workarounds to retain 88% of the Zoom PodTrak P4’s capabilities, while sacrificing the internal multitrack recorder capabilities… for now.

Some of the manufacturers listed above have contracted Tépper and/or TecnoTur LLC to carry out consulting and/or translations/localizations/transcreations. Many of the manufacturers listed above have sent Allan Tépper review units, including Zoom but not in the case of the P4. Some of the software developers have sent Allan Tépper NFR copies for review, including Cleanfeed, Hindenburg and Izotope. So far, none of the manufacturers listed above is/are sponsors of the TecnoTur, BeyondPodcasting, CapicúaFM , SpeakCastilian or TuSaludSecreta programs, although they are welcome to do so, and some are, may be (or may have been) sponsors of ProVideo Coalition magazine. Some links to third parties listed in this article and/or on this web page may indirectly benefit TecnoTur LLC via affiliate programs. Allan Tépper’s opinions are his own. Allan Tépper is not liable for misuse or misunderstanding of information he shares.