Friends, it’s time to get serious. The ongoing debate between (intelligent, well-meaning) people about what “transmedia” means and even whether defining the word matters at all, is killing our common cause. To this day, after years and years of debate and experimentation, a Producers Guild credit, countless Variety/Wired/Fast Company/etc. articles, and a zillion doctoral theses, it’s still meaningless jargon. Yeah, I said it.

It’s time to cross the Rubicon. Either “transmedia” will remain an interesting theoretical footnote, a vessel into which we put our fantasies about what might come someday in The Future; or it will emerge as the dominant entertainment format of the 21st century, in the same way that “motion pictures” defined it for the 20th century.

Either way is fine.
But we must choose.

There are two parts to this article.

PART 1: Should we define transmedia?

There are 3 reasons why we need to define “transmedia”:

At the moment, the transmedia scene is a vibrant community of smart, creative people who want to create a real industry. However, in order to do so, we must learn to create value on a scalable basis, which is a mission impossible if we continue to rely on touchy-feely, blue-sky concepts to guide our work.

We can leave “transmedia” to the academic, the philosophical, and the fantastical. It can remain a conceptual framework for our imaginations to run free in a vast, dreamy Narnia of ideas. If this is our answer, lots of books and panels and dissertations will be generated around the world. It will be great fun talking theory to each other. And no one will make a dime.

Why does that matter so much? Because people like me, who’ve been thrashing about at the intersection of entertainment and technology for a long, long time, need a brand for what we make. A brand like “movies”, “television” or “video games”.  To build businesses, which in turn create industries, we need something to sell.

[OK. Poignant aside… Just now, literally as I write, I received a note back from a friend at a prominent film school that was planning to offer a class in transmedia that I was going to help with. Here’s an excerpt from the email:

Unfortunately the class was recently cancelled because of low enrollment… Based on the feedback I've received, it's been very difficult to fill transmedia courses because most students don't really understand the concept; and it's tough to explain in a course description.

Ouch. These kids are our creative future and they have no idea what we’re talking about.]

So, I’m looking at you. Yes, YOU. Should “transmedia” be concretely defined, or not?

PART 2: What should the definition of transmedia be?

I have a few lines in the sand that I, personally, would like to draw.

First, I submit that transmedia should be defined as storytelling. Period. If there is no story, it ain’t transmedia. I know this is a very stark statement, and may leave some other definitions radically narrowed or out of the picture entirely. Sorry, it’s time to make choices.

[FWIW, I just looked up “transmedia” on Wikipedia and it auto-forwarded me to “transmedia storytelling” so there is support for this rule in the wild. Also, as it happens, for more than half the projects listed as “recent” and “notable”, I was either personally involved or have a close colleague who was. These projects are all based on traditional narrative structures.]

Furthermore, I am of the opinion, as I have written before, that storytelling itself is not broken and that Transmedia Should Not Try to Fix It. For 25,000 years, storytelling has meant the communication, from one entity to another, of events that have a beginning, middle and end, and which include characters and conflict. Believe me, I know first hand how exciting it is to think about those rules as old-fashioned, a relic of the time before The Enlightened Age of Transmedia.

But I also know first hand what an epic waste of time it is to have “the audience drive the narrative” and ideas of that ilk. The truth is, “Choose Your Own Adventure”, no matter how complex and social and multi-platform and slickly produced, will always suck. This includes every version of ‘collaborative storytelling’ known to man. These efforts uniformly result in something confusing and unwatchable. As Tim Kring pithily put it:

“The ubiquity of the pen doesn't mean everybody's Hemingway.”

Some will disagree. To them I respectfully ask for counter-examples.

Second, we need a clearly defined “curtain” for transmedia stories. Every entertainment format in history has had a very well defined way to enter a story, a comfortable way to enjoy it, and an easy way to exit.

Blurring the lines between reality and fiction is awesome for a small number of extreme people who like that sort of thing, but it will never, ever, be mainstream.

My colleagues and I used to make alternate reality games, which were the storytelling equivalent of being dropped naked by parachute into the rainforest. But what we eventually realized is that, like an amusement park ride, in order for sane people to participate in intense experiences, they need to be able to see what it is, know how long it’s going to last, and know that you have to be THIS TALL to ride it.

Third, we must stop confusing transmedia with marketing or merchandising. While ‘transmedia’ can be commonly used as a tool for marketing other forms of content or products, it is not the same thing as the marketing. This is exactly like saying that ‘video’ is used all the time as a tool for advertising, but it is not advertising itself.

OK, who’s seen some version of this godforsaken diagram? Or even worse, made one themselves? [Yes, I have made them. A bunch of times. And I’m sorry. Seriously. 🙁 ] 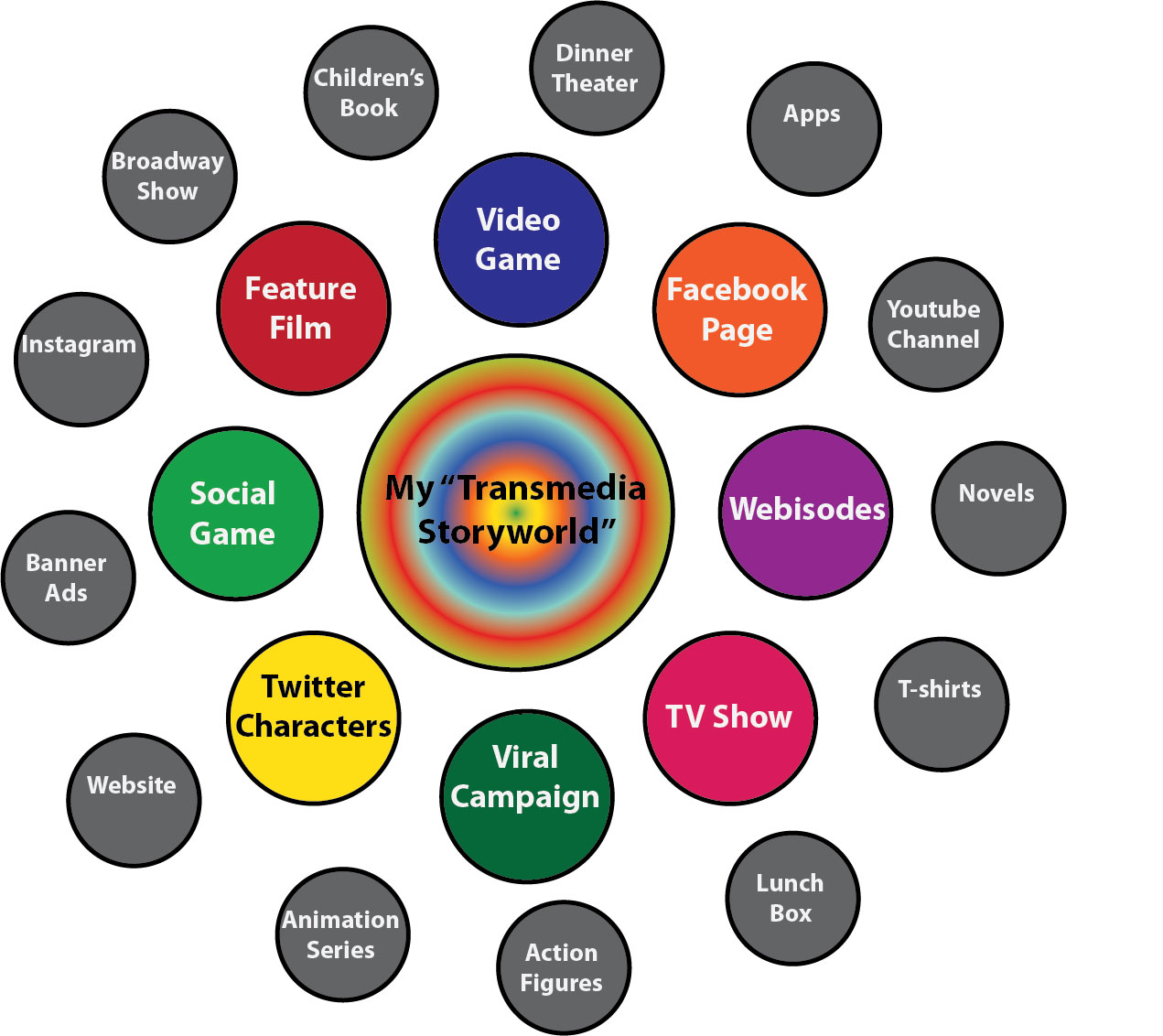 Let me state clearly and loudly:

We should NOT call this mess ‘transmedia’.

We should call it ‘snerlicot’…

We don’t need another word for it.

Look, I don’t care how nice of a presentation you make, how much backstory or world building it contains. Your beautifully bound coffee-table book is not a new form of entertainment… It’s just an expensive pitch for creating the usual stuff.

Fourth, transmedia should be multi-screen and mobile.

There does seem to be some surface-level agreement about this. I don’t know anyone who says an episode of Castle is ‘transmedia’, no matter what device it’s on or how dreamy Nathan Fillion is.

The pertinent fact is that human beings are being completely rewired to require multiple simultaneous information inputs in order to feel fully engaged. You know the stats on multitasking, or you should… Depending on the source, somewhere between 77% and 88% of us multitask with at least one other device while watching television. This seems like an insane statistic at a glance but is really empirically apparent, unless you live in a retirement home.

COROLLARY: Transmedia is not a ‘second-screen’.  There are a bazillion apps now in this category. Some of them bring value, while others are just crappier versions of what we can already do on the internet – watch twitter streams, play trivia, etc. Even the category ‘second-screen’ implies that these apps have an inferiority complex:

Oh King Screen One, we are here to say,

“To your primacy, we’ll kneel and pray!

Our apps will be your sidekicks, jesters,

As long as we attract investors!”

Transmedia should not have this attitude. Transmedia should mean creating content that treats all screens as a common fabric for telling compelling stories. It should be a new form of entertainment, which has emerged to recognize a fundamental, species-wide shift in our human experience. It is not Bedazzled TV.

By now, I’ve probably managed to piss many of you off. That is not my goal. I mean no harm. I come in peace!

My only claim here is that I have screwed this up as much as anyone. I bear many scars, have endured years-long explorations into alluring dead-ends, had accomplishments diminished through the rear-view mirror, and had thriving companies destroyed by ignorance. And I know I’m not alone in this.

But you know what? Boohoo. Sniffle, sniffle. This is always the entry fee when creating something important and disruptive.

The point is, we have collectively paid our dues by now, and we need to take charge of this opportunity, before others who haven’t earned it do it for us. I don’t really care if my personal opinions become consensus (well, maybe a little); I just want us to collectively make some choices, so we can get to work and build something permanent, create great content, and make a damn good living.

If enough of us agree on the answer to the first question, “Should we define transmedia?” then we should get to work on the second question of how to define it. So comment here, write your own article, email me ([email protected]), or whatever floats your boat. And then let’s get our act together and create a process for making some decisions.