HP Reverb G2 Omnicept is a XR headset that uses sensors to monitor muscle, heart rate, pupil size and gaze, coming May 2021. Revealed last year, this is a professional version of the Reverb G2. 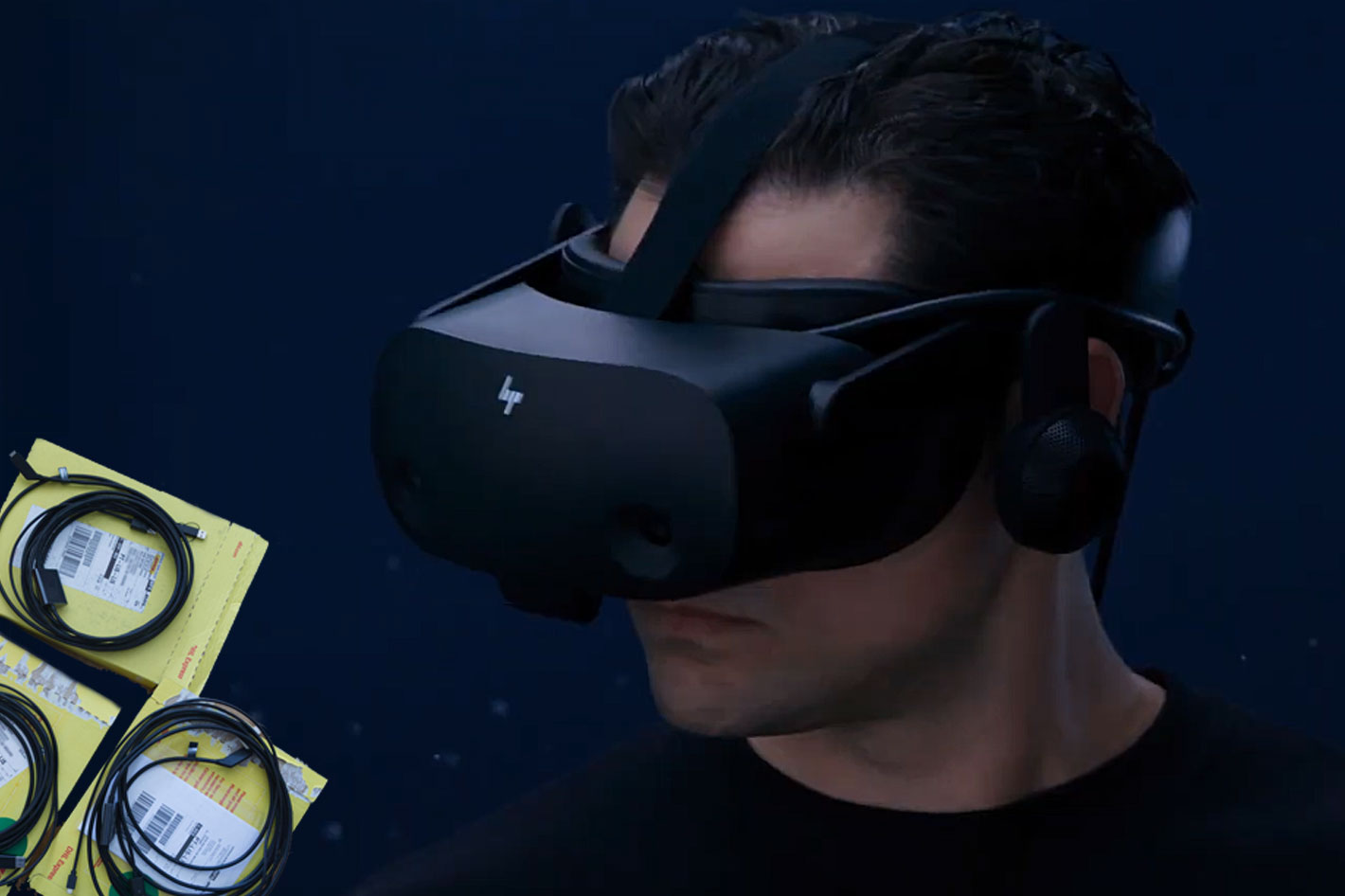 The new VR headset from HP will be available in May but one question needs to be asked right now: has HP solved the problems with the defective cable used on the Reverb G2, which does not last long?

Announced in 2020, the HP Reverb G2 Omnicept Edition, an enhanced version of the now popular – for good and bad reasons – HP Reverb G2, will launch in May, with a price of $1,249. Although this is not a consumer headset, it is no doubt a solution many people will add to their equipment set if they are interested in VR, either for content creation or for anything related to Virtual Production.

Despite some changes in design, the key specifications of the headset are the same, with the high resolution of 2160×2160 per eye, but this version will offer, according to HP, foveated rendering to deliver lifelike VR like never before. You will need a NVIDIA VR Ready Quadro or GeForce Turing based GPU for foveated rendering, but this solution is something consumers will also want to have… maybe in the HP Reverb G3. One more note for developers: Unity foveated rendering plug-in and run-time are also required and available from the Unity Store or HP Developer Portal https://developers.hp.com/omnicept/downloads.

Now, this is all fantastic news, but I’ve a problem: the unreliable cable used to connect the HP Reverb G2 VR headset to the computer. Will the new HP Reverb G2 Omnicept introduce a better cable connection, or are users going to have to go through the same ordeal as thousands of other users of the HP Reverb G2? You just have to do a search online to discover that HP has a real problem and has, as of yet, to confirm if a cable with a new design – which is urgently needed – will be released.

A razor and blades business

The stories of people having to wait for months for a cable suggest that there is something wrong with the lifeline that makes the HP Reverb G2 be more than a paperweight. Without the cable, the headset is of no use, and HP has asked users to wait for months to get a new cable. This when people get to connect with HP Support, which is also not an easy task, as so many have experienced… me included.

I could point here to a continually growing number of comments online that reveal the dimension of the problem, but a few will suffice, to which I can add my own experience. In fact, in the last four months I’ve amassed several broken HP Reverb G2 cables that confirms HP has a problem. I just started today a new HP Support request for a cable, as the cable I was using started showing the usual problems – white static noise and screen blackouts – on Monday. The cable lasted one month! What’s worse, I’ve now THREE (3) broken HP Reverb G2, for a headset that I’ve had since December 31, 2020. 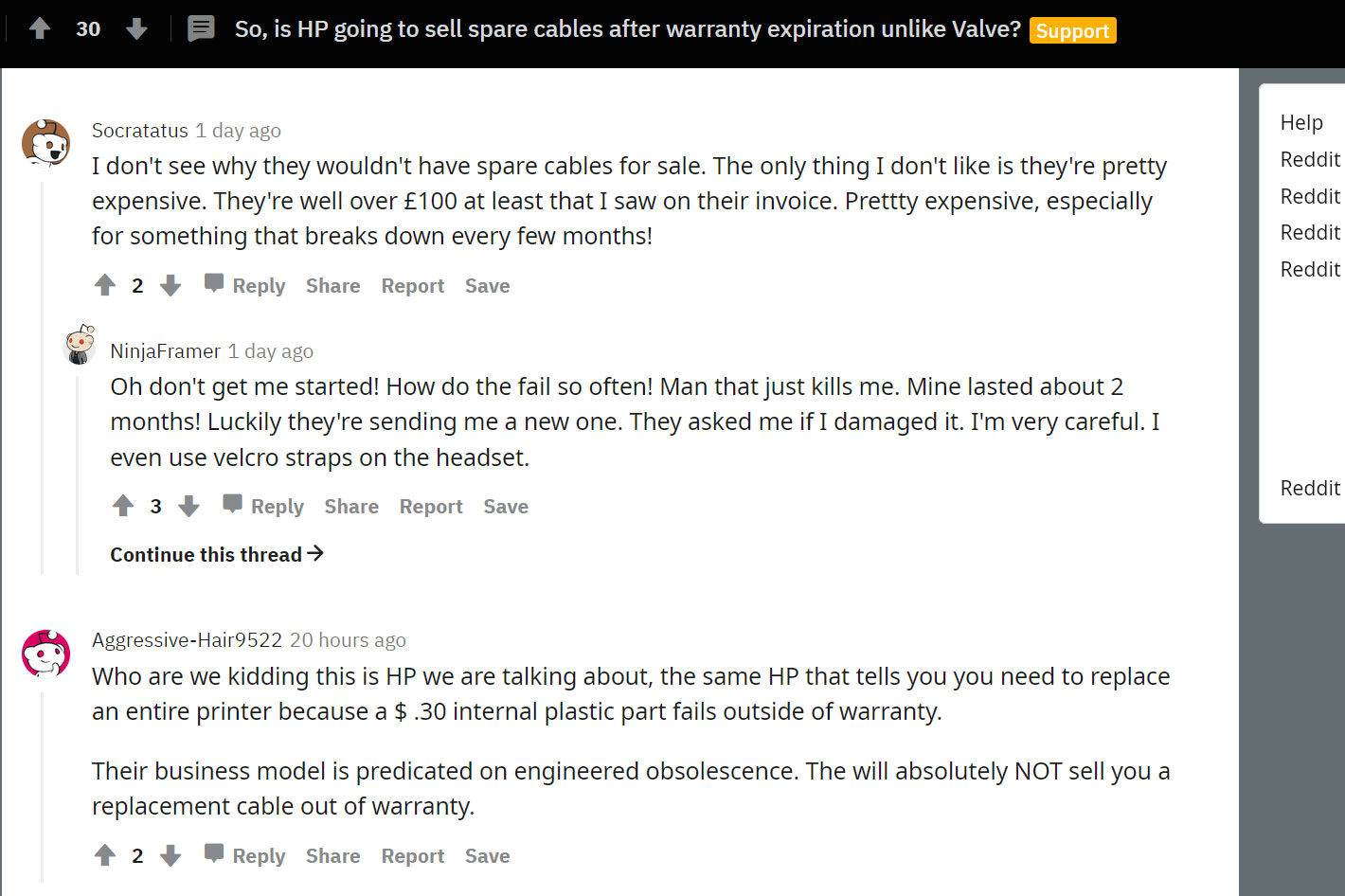 Although the HP Reverb G2 headset is not cheap, at some $600, as a consumer I feel now that the analogy of the razor and blades business tends to apply here: if each new cable lasts one month, even less according to what others have commented online, and to my own experience – days in some cases – then keeping the headset in good working order will mean a huge expense each year. This if and when HP sells replacement cables, because as of now, I am still protected by a European warranty. Although price for a replacement cable is not known yet, it’s not going to be cheap, because of the complexity of the cables used. 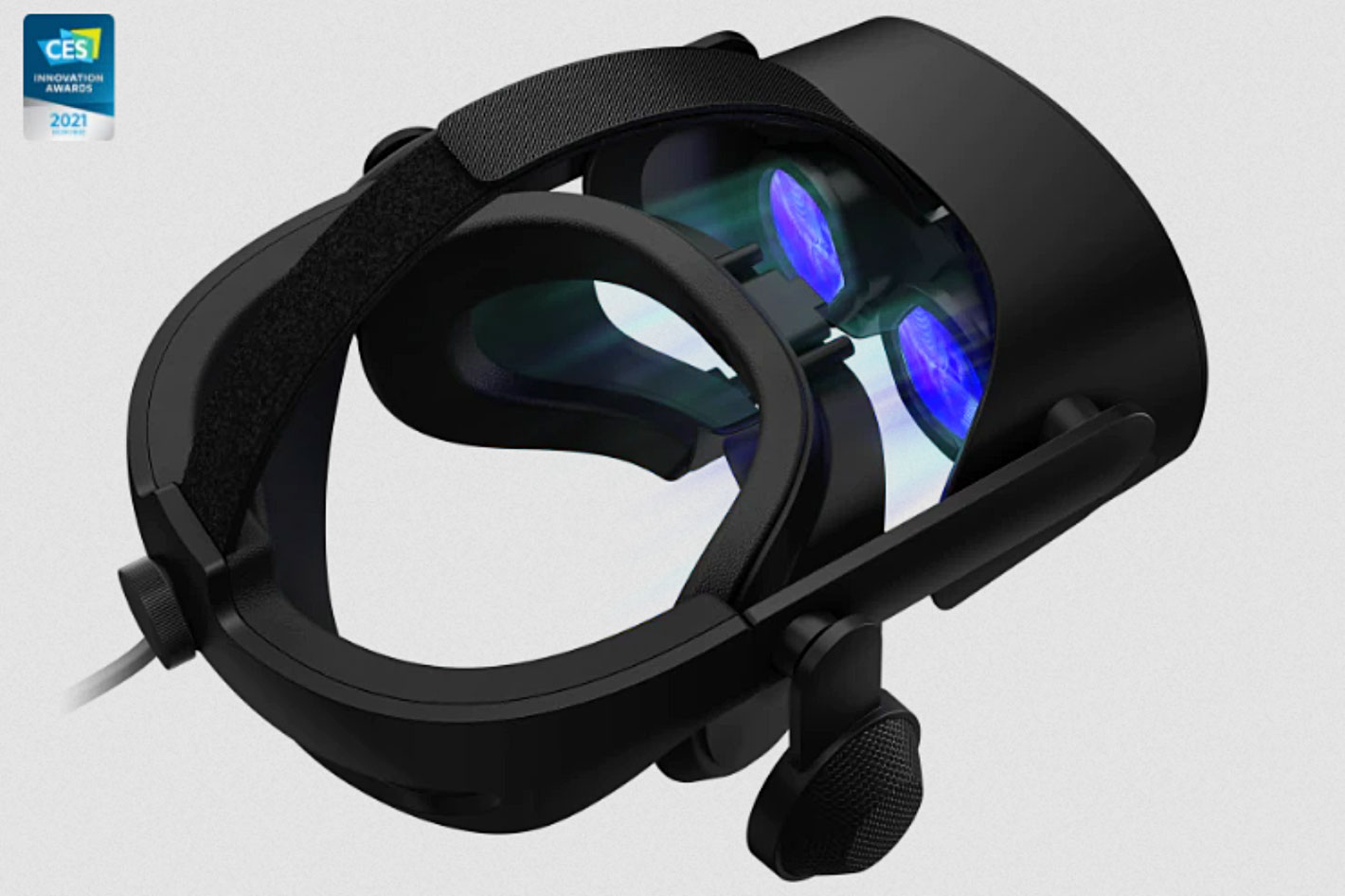 Does the HP Omnicept have a new, better cable?

The problem is that the HP Reverb G2 cables get damaged very easily, and my experience as someone who uses the VR headset only for sitting down experiences and participating in virtual events, like some of the recent film festivals – about which I write here at ProVideo Coalition – and for flight and driving simulation in my free time, makes me be afraid of even using the headset. It is a strange sensation, as I never thought about the cables on the Oculus Rift and Oculus Rift S as something that could get damaged under normal use. In fact, I’ve an Oculus Rift S HMD connected to a second computer under my desk, and despite having now three years of use, I never, once, had problems with the cable used by that headset. So, something must be wrong with HP cables, both the original that came with the headset and those HP sent as replacement. 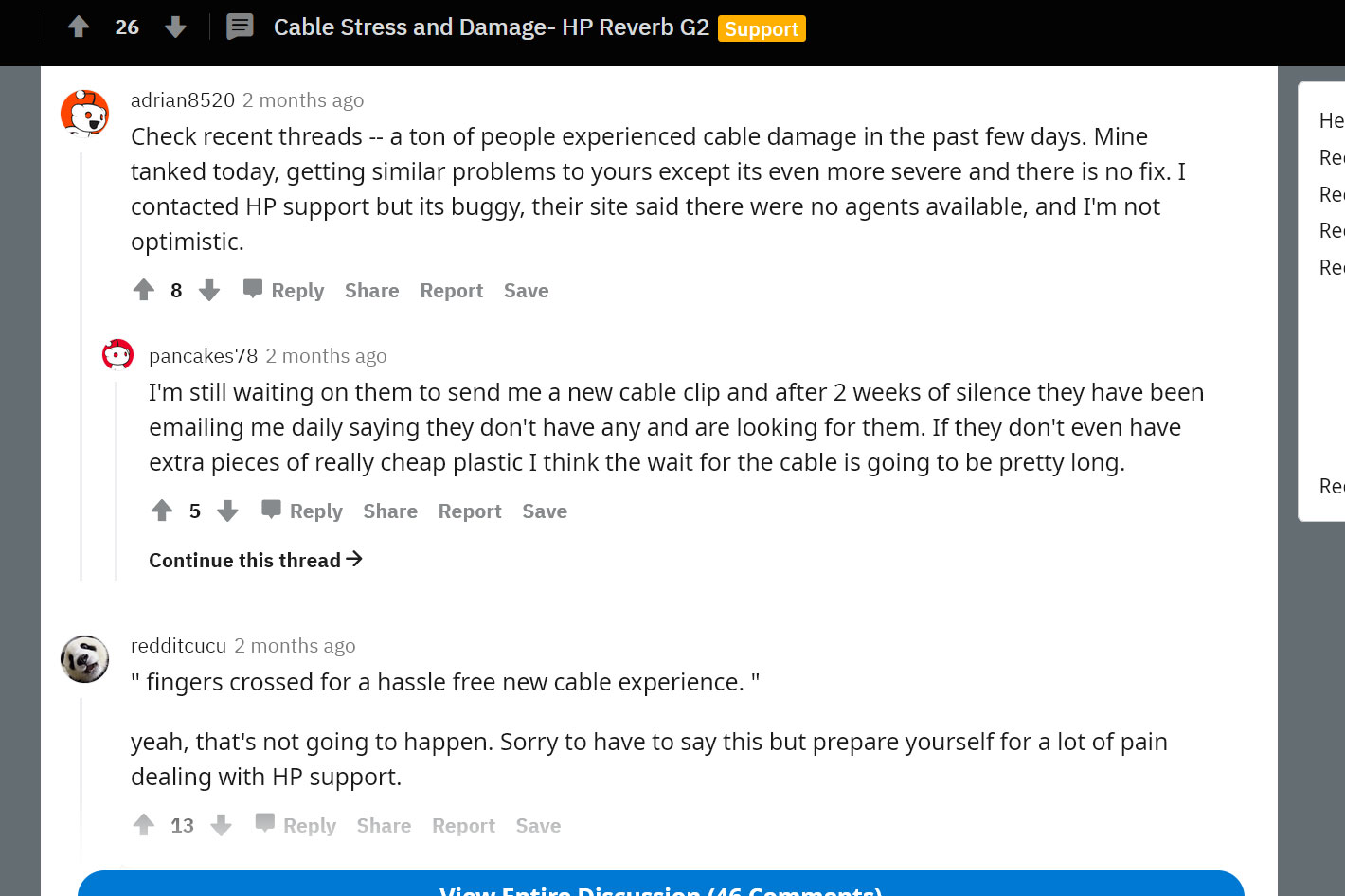 I’ve asked HP about all these issues last January and the way forward for the Reverb lineup, but I am yet to have a reply from the company. Recently a YouTuber mentioned that a new replacement cable will be available in May, but there is no confirmation from HP. Is a new cable being introduced with the HP Reverb G2 Omnicept? Or is it the same cable, meaning even more users will be added to the list of people waiting for a replacement cable that is defective and prone to errors?

I believe HP needs to clarify the situation. It’s really strange that only a few websites, magazines or YouTube influencers refer the problem with the cables, which is real and affects many users. As I wrote before, the HP Reverb G2 is a great VR headset, when it works. The problem is that you never know when things go wrong. As I’ve discovered in recent months, it is not a problem of IF but WHEN. And when it does go wrong, HP apparently takes a long time to get back to you with a solution. Or answers. 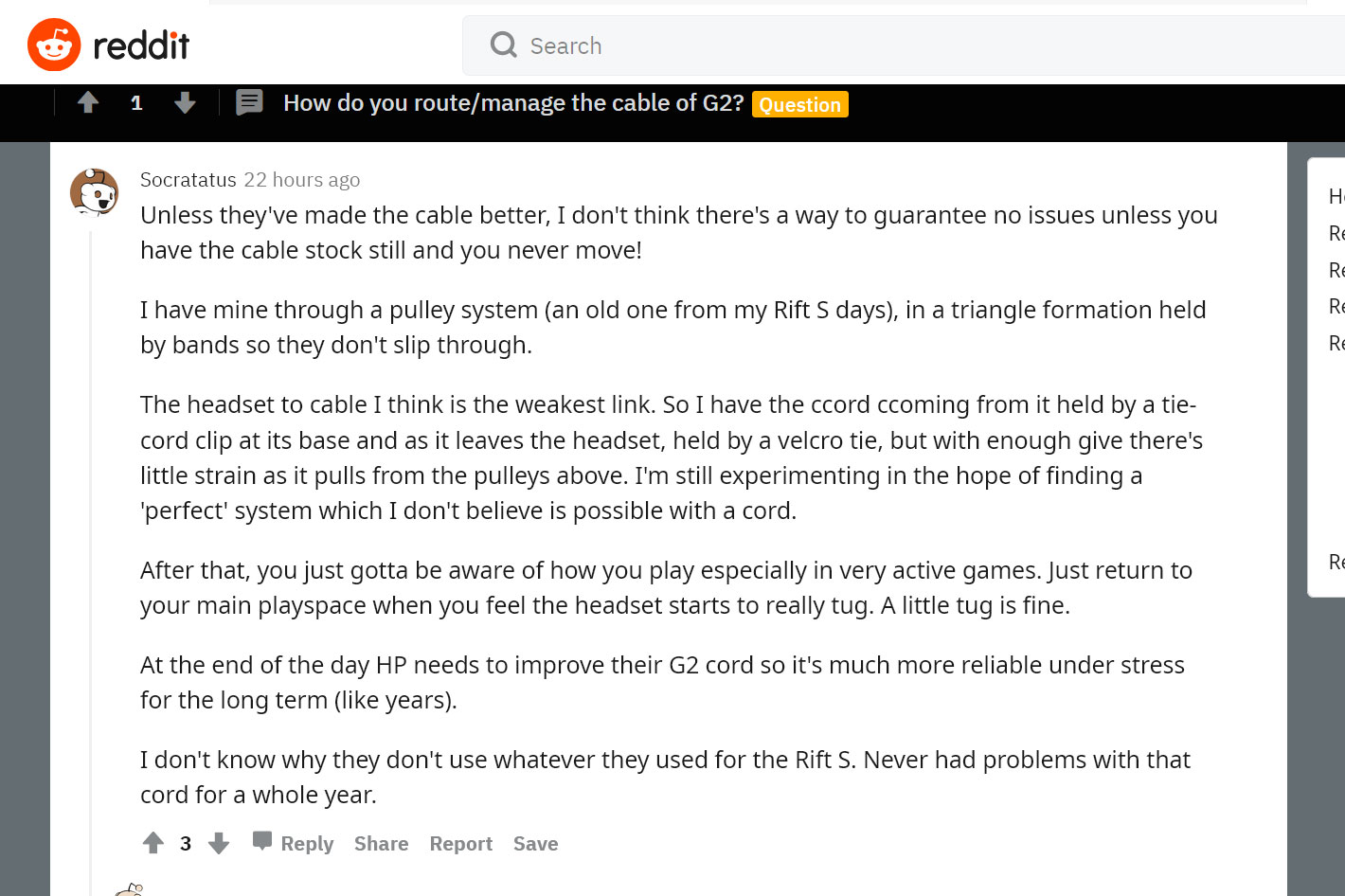 The HP Reverb G2 Omnicept due to be released next May is, as noted above, a different solution, for professional use in different areas. HP announces it will be available with four different plans – Core, Academic, Developer and Enterprise – with, says the company, “an extensible SDK we support you with advanced tools and services needed across major development platforms like Unity and Unreal Engine.” The company then says “Let’s reinvent the industry together” … but they really need to get the cable problem solved before anything moves forward. After all, they are asking $1,249, double the price of the HP Reverb G2, which is already not the cheapest solution around.