A grading monitor called DaVinci Display would make sense for Blackmagic for many reasons.

Although Blackmagic Design has traditionally been known for its audio/video i/o cards, external interfaces and converters, through its acquisitions and other developments, the Australian company is now also known as a manufacturer of video mixers, associated rack-mounted monitors, affordable raw video cameras, and the new owner of DaVinci Resolve, the industry’s most renowned grading software. That’s why I suspect that one of Blackmagic’s next logical steps will likely be to launch its own branded video grading monitor, which would likely be called DaVinci Display.

Although I am sporadically contracted as a consultant by different equipment manufacturers and software developers regarding the design of new products or the improvement of existing ones, that is not (so far) the case with Blackmagic Design. What I am writing in this article is absolutely not based upon any inside information, nor have I a heard any such rumor. It’s just my suspicion based upon other trends.

The current monitors from Blackmagic are called SmartView SDI Monitors. The company has a slogan for them called:

The current models include the SmartView Duo (dual 8-inch, for US$695, shown above)… 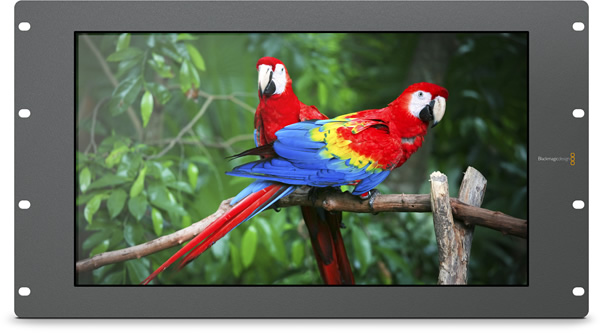 and the SmartView HD (17-inch for US$895, shown above). Some readers might initially ask: Why not consider the latter for editing and grading?. You may know from my prior articles or from other sources that it is desirable to have a true 10-bit panel (aka 30-bit) (or better) for grading. (See the section called Do you dream in 18-bit color, 24-bit color, or 30-bit color? in this 2008 article for more background.) According to Blackmagic’s specs, the SmartView Duo can display 16.7 million colors, which corresponds to 8-bit (24-bit), but the SmartView HD can only display 262,144 colors, which is not even considerable for grading. The current SmartView monitors are quite inexpensive, but evidently are appropriate to determine proper framing and perhaps focus (i.e. for live production). Neither of the two current SmartView monitors is appropriate for serious grading.

How I visualize a DaVinci Display from Blackmagic

Considering Blackmagic’s tradition of low-priced, high-volume products, I would expect the first DaVinci Display to be 1920×1080 (1080p), 17“–24” diagonal size, with a true 10-bit (30-bit) panel to achieve 1,073,741,824 colors, which is often rounded to 1.07 billion colors (in the case of U.S. billion nomenclature). I imagine that it will accept either 4:2:2 or 4:4:4 with a single SDI input to match almost the entire spectrum of current interface devices used with editing and grading systems both from Blackmagic’s own devices and from competitors like AJA, Matrox, and MOTU*. A Cinema DNG LUT would also be nice. Blackmagic might also include an HDMI input, but that would increase the cost of the device and (in my estimation) only gain them a very low number of additional sales to those few systems that don’t have an SDI output (i.e. Intensity/Intensity Shuttle/Intensity Pro or similar ones from other manufacturers), and even those could add a an external Mini Converter HDMI to SDI (US$295).

*I remind our readers that presently, DaVinci Resolve works exclusively with Blackmagic interfaces on Mac and Windows. However, the imagined DaVinci Display could be used with editing software with other manufacturers, and with non-DaVinci Resolve grading software.

A higher-end DaVinci Display 4K will likely be shown as a prototype, without a price or ETA.

Calibration of the DaVinci Resolve

I’d expect Blackmagic to offer downloadable calibration software for Mac and Windows, and that the DaVinci Display will have a USB port for this calibration software to control the monitor. I would expect that the required probe will be an optional accessory to reduce the unit price of DaVinci Display, especially considering multi-seat installations where a single probe is often sufficient for multiple displays.