As the standard is devalued, the world undertakes a slow-motion search for an alternative. What can be done for QuickTime? 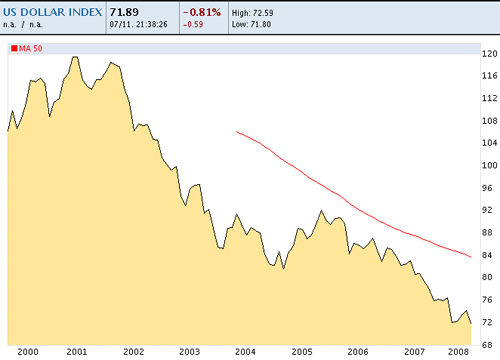 How bad are things for the US Dollar these days? So bad that, as reported by the BBC and mentioned recently on This Week in Tech, Gisele Bundchen no longer accepts modeling pay in dollars, nor apparently do many high-end boutiques in the capital of U.S. commerce, New York City. European travel is effectively twice as expensive as it was just a few years ago simply because of the exchange rate. So it may come as a surprise how familiar the situation of the world economy in regards to the dollar is if you’re a video professional using QuickTime.

Even casual followers of economic data have noticed the sorry state of the dollar when compared with its nearest competitor currency, the Euro, as well as with the value of pretty much anything else, including gold. If you didn’t do any economics along with your video training you may not know that the dollar was long pegged to the value of gold, until the first day of 1975, when under Nixon it was allowed to float freely on international currency markets. It was a roll of the dice that the dollar was itself more of a standard than the metal that drove the conquest of the world, and the expansion of California.

At that point in the mid-seventies, the dollar standard was already dominant, as the U.S. hosted the world’s largest free-market economy. Since then it has only become more so. Those who wonder why the world does not simply switch to the Euro in light of the failing dollar fail to realize that, although this strategy might work for the girlfriend of a Superbowl loser, the main thing preventing a run on the dollar right now is that the world’s major creditors – in particular China and Japan – hold dollars. To ignite a sell-off would be to incinerate their own treasuries. There is no fast way out of the dollar standard, only a slow motion move to better solutions.

And so it is with QuickTime. Yes, we love Apple (or I will again as soon as can get an iPhone without risking waiting 4 hours only to be turned away empty-handed, as happened to a friend of mine this weekend). And QuickTime has in many ways served us well. It is backed by the only company who dominant in both hardware and software for creative professionals, so in many ways we are betting with the house, just as the U.S. Treasury of the late 20th century was, in many ways, the hub of the free market economy itself. However, we now find ourselves in some ways stuck with a standard whose value for us seems have declined markedly.

Back in the 90’s I remember lobbying hard, along with many others, for QuickTime to be universally supported on systems from Avid and Discreet and smaller more specialized companies that shunned the format in favor of proprietary formats such as OMF (the “Open Media Framework”) that couldn’t be played back without buying something, and image sequences, which couldn’t be played back in real-time without a specialized hardware/software combination. We were also rooting for QuickTime as the underdog against the other web video formats of the day, the much dreaded Windows Media Real.

This echos how the black market also helped the dollar, as gold was impractical for illicit purchases in far-flung corners of the world. The almighty greenback was more portable and universally accepted; you could hail a cab anywhere in the world without having converted currency and the driver would be sure to accept dollars as compensation.

And now? QuickTime remains the easy and ubiquitous option; there are better formats (DIVX, Flash Video) for delivery in specific cases, but you can’t use them in both production and delivery. That makes it all the more regrettable that Apple has continued to develop it simultaneously as the foundation of Final Cut Studio and as the digital-rights-managed consumer delivery medium of choice. A short list of complaints resulting from the prosumer character of QuickTime, which I hope readers will lengthen in the comments, includes:

All of which brings us to the seeming conclusion that, like so many of the world’s banks with the dollar, we video would be fleeing QuickTime if only there were a viable alternative and we didn’t already have so many assets tied up with it. My own solution of late has been to use image sequences while working and QuickTime only for delivery and review, just like the bigger effects houses do.

What are your horror stories and/or solutions?